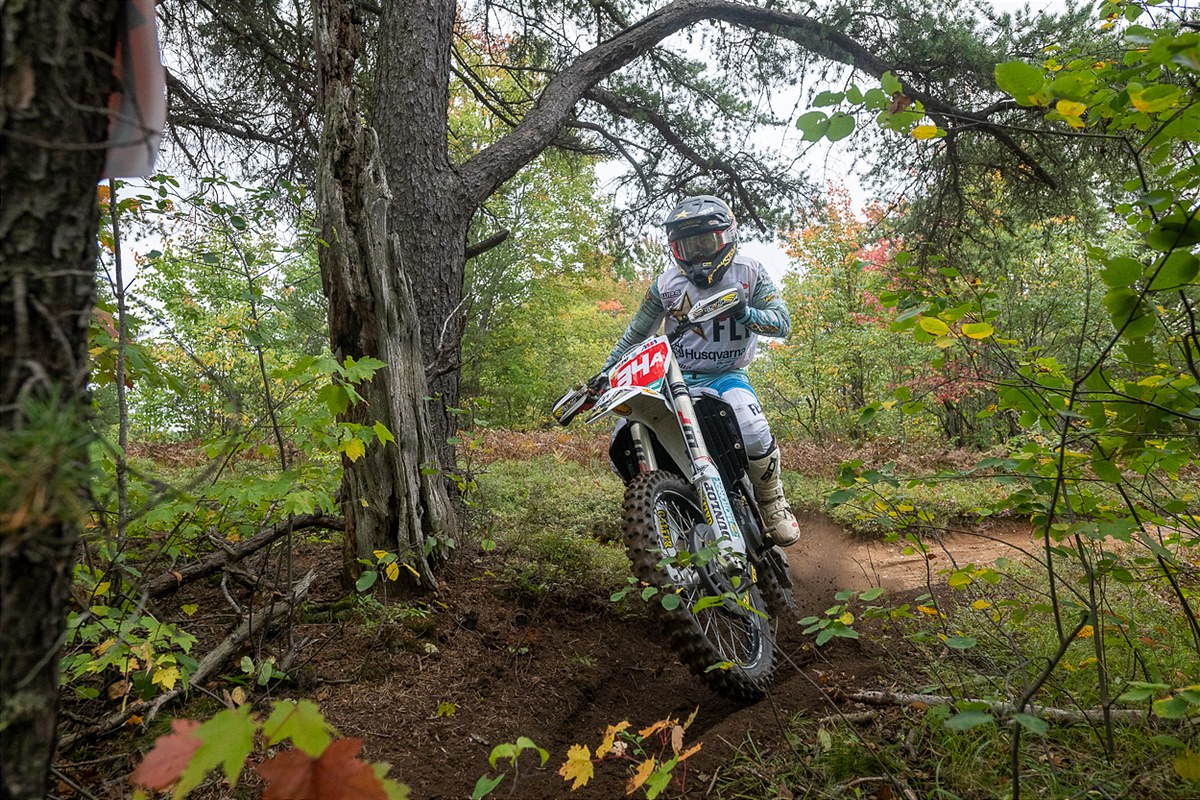 After clinching his best finish of the AMA National Enduro Championship season last round, Rockstar Energy Husqvarna Factory Racing’s Craig DeLong was hungry for another podium result at Round 7 this weekend. After running in podium contention for half of the Loose Moose National, DeLong finished just shy of the podium, in fourth, with a fighting performance in Marquette, Michigan.
DeLong showcased his speed in the first two tests, finishing second. In Test 3, he swiftly navigated the tight and twisty trail to score third. A few mistakes in the fourth and fifth sections, left him to finish in fourth through the two tests. In the final test of the heavily-forested Upper Peninsula, he claimed fifth. Despite slipping back a bit as the nearly two-hour race progressed, DeLong has been challenging the frontrunners of NE Pro1 for the duration of the season and continues in a strong chase for the championship.
“I had a good day,” DeLong said. “I was in the mix all day. I had a few mistakes, and in a few tests I was off pace. That put me off of the box. I’m happy with my ride and with my bike. I feel like I’ve been making small improvements each race, and it’s getting me closer to the front at the end of the day.”
It’s been a year of bad luck for teammate Trevor Bollinger, as he missed two National Enduro races due to a broken hand suffered at a GNCC earlier this year. Returning to racing at the last National Enduro, Bollinger secured his best finish of the year but unfortunately, a few weeks ago, he suffered a crash during practice and is once again out of competition.
Rockstar Energy Husqvarna Factory Racing’s Thad DuVall returned from injury at the last round and scored a top-10 result, but he sat this round out as he shifts his focus to the remainder of the GNCC season.
Round 8: Muddobbers National – October 2 – Matthews, Indiana
Loose Moose National – Results
NE Pro1 Class
1. Grant Baylor (GAS)
2. Steward Baylor Jr. (YAM)
3. Ricky Russell (SUZ)
4. Craig DeLong – Rockstar Energy Husqvarna Factory Racing
About Michael Le Pard 8242 Articles
"Mr. Totalmotorcycle". Owner and Founder of Total Motorcycle. Supporting over Motorcyclists and Motorcycling for 23 great years. Total Motorcycle is my pride and joy and being able to reach out 375 million people has been incredible but I could not have done it without the support of my visitors, readers and members, thank you so much! You are making a difference to millions of riders worldwide. Thank you.
Website Facebook Instagram Twitter YouTube LinkedIn

MotoGP Circuit of The Americas in Austin Return

April 7, 2022 Michael Le Pard News Comments Off on MotoGP Circuit of The Americas in Austin Return

Less than seven days after the Argentina GP, the Ducati Lenovo Team riders are set to return to the track this weekend for the fourth round of the 2022 MotoGP World Championship: the Americas GP.Once […]