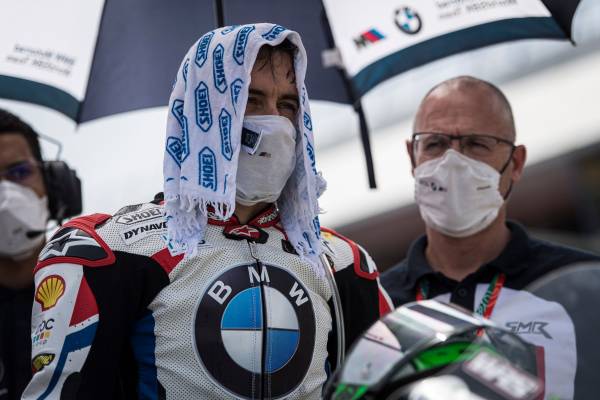 Jerez de la Frontera. It was a day of mixed feelings for the BMW Motorrad WorldSBK Team at Jerez de la Frontera (ESP). The racetrack in the south of Spain hosted round two of the 2020 FIM Superbike World Championship (WorldSBK). Tom Sykes (GBR) finished sixth in Sunday morning’s Superpole Race. He then came home eleventh in race two in the afternoon. His team-mate Eugene Laverty (IRL) was 13th in the sprint race in the morning, but retired in race two.

Conditions were hot again at Jerez de la Frontera on Sunday, with ambient temperatures of around 37 degrees Celsius and a track temperature of up to 60 degrees. Sykes started the morning’s Superpole Race from third place on his BMW S 1000 RR. He dropped three positions at the start and fell back into sixth place, before going on to finish in that position after ten laps of racing. Laverty made a quick start, racing through from eleventh into seventh place. He was running eighth at the halfway point, before he lost out in a fiercely-competitive group of riders and eventually crossed the finish line in 13th place.

Sykes and Laverty then started race two from sixth and 13th places on Sunday afternoon. Sykes did not make a great start and conceded a few positions. Over the course of the race, he was unable to make any progress in a packed field and eventually finished eleventh. Laverty once again got off to a good start and climbed into the top-ten. Shortly after that, however, he hit a false neutral when changing gear and came off the track before rejoining the race at the back of the field. He ultimately had to retire in the second half of the race as he was also struggling with a painful blister on his foot.

The BMW Motorrad WorldSBK Team now heads straight to Portimão (POR), where round three of the 2020 WorldSBK season takes place next weekend.

Marc Bongers, BMW Motorrad Motorsport Director: “The day started pretty well. We were able to solve Saturday’s problems and finished the warm-up in decent positions. For the Superpole Race, we chose the harder SC0 tyre and that decision actually worked out quite well. We were very satisfied with Tom’s sixth place, which then was his start position for race two. Although we were able to make improvements with the bike, Eugene still did not get along with it as hoped, so he started race two from further down the grid. Sadly, we couldn’t shine in the second race. Tom was unfortunate in the first corners, which resulted in the loss of many positions that could not be made up during the race. Our pace was simply not good enough. Eugene hit a false neutral in turn thirteen when downshifting, was unable to stop and rode into the gravel. Unfortunately, the race was over for him from that point on. Now we have a week to work hard and analyse the problems and of course hope for significantly better results at Portimão.”

Shaun Muir, Team Principal BMW Motorrad WorldSBK Team: “It’s been a tough weekend. The Superpole Race for Tom wasn’t too bad to get P6. It was probably the best we could have afforded having opted for the SC0 instead of the SCX. For Eugene, on the other hand, the sprint race did not go to plan. In race two, Tom didn’t get a good start and got boxed in losing a lot of positions, which can happen. He was then in with a pack of riders where he just couldn’t make an impression on them due to major brake problems. The faster guys were five seconds up the road and you can run at their pace but when you’re stuck with riders with stronger motors than you, late on the brakes, it makes your race difficult. Eugene got a great start to his second race and gained around four positions into T1, but his race was short lived after hitting a false neutral and running into the gravel, ultimately ruining his race. He continued the race, however losing 30 seconds and riding with his blistered foot we made the decision to retire the bike. We will debrief with the riders tonight and have a detailed look at where we need to improve the bike for the next round in Portugal, hopefully coming back a lot stronger.”

Tom Sykes: “I’m disappointed with today. We worked hard in the hot conditions but unfortunately not had the luck come our way. Yesterday we had some good pace in race one, but we had a technical issue which forced me to pit. Then today in the Superpole race, we opted for a tyre we knew was a harder compound and I think we had a decent race considering the difference in compounds. In race two we suffered more technical restrictions, but there are some positives to take away with us as we are constantly finding new areas to explore on the BMW S 1000 RR. Looking forward, I think we need some luck on our side so we can hopefully get the results that we deserve.”

Eugene Laverty: “Another tough race today with a really good start. I fought aggressively and made up some positions within the first corners. Unfortunately, by the end of the first lap I got in this false neutral, ran off the track and from that point onwards my race was more or less over. I tried to do some laps to regain positions, but since I was outside the top twenty, I got to quit. So now I am focusing on Portimão, which was always one of my favourite races of the season but this year it’s even more special because it’s my first real home race, as I live just 15 minutes away from the track now. I expect the conditions will be nice and sunny and I am hoping for some strong results as I have won on the Portimao track several times, so let’s see what we do next weekend.”

Following a successful debut in 2018, Johann Zarco and Hafizh Syahrin are excited to head to South America this week for the second round of the season at the Termas de Río Hondo Circuit. With […]

Registration is now open for the 2021 YZ125, YZ85 and YZ65 bLU cRU FIM Europe Cup series, in which participants will be competing for a place at the Yamaha bLU cRU Superfinale, to be run […]

A decent crowd out on the hills of Sevlievo, Bulgaria, witnessed some of the toughest racing this season as Monster Energy Yamaha Factory MXGP’s duo of Romain Febvre and Jeremy Van Horebeek pushed hard to […]