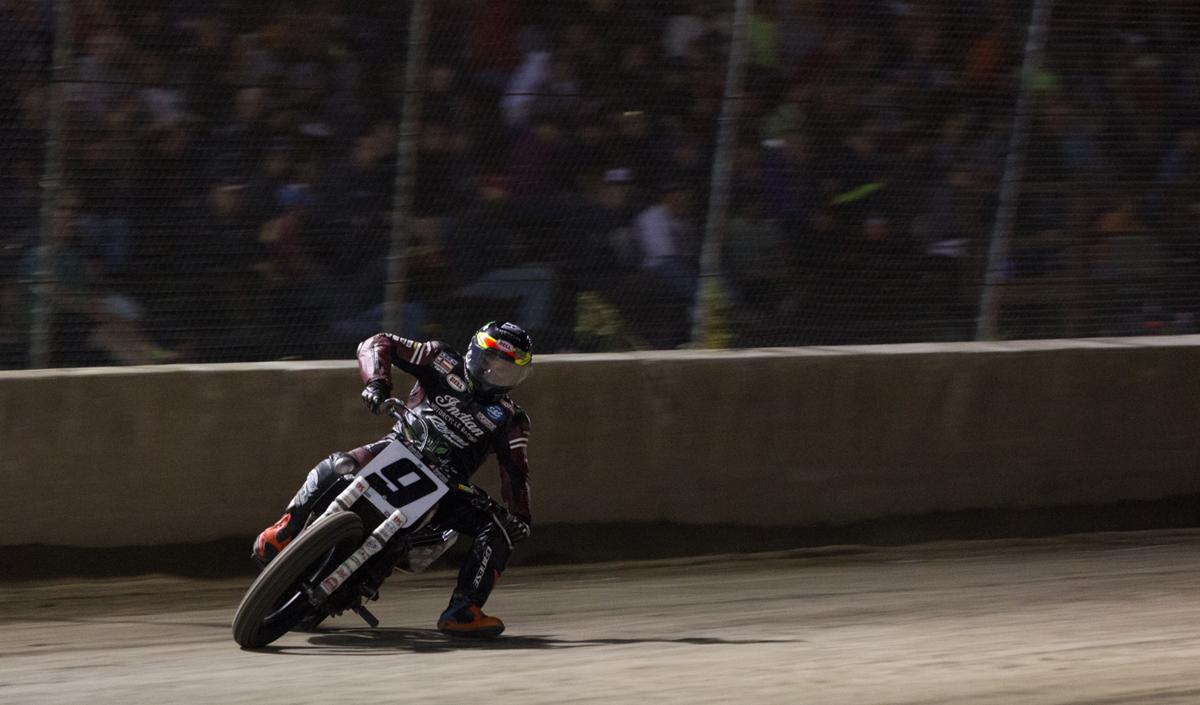 ELBRIDGE, N.Y. (July 8, 2017) – American Flat Track was back in action following a two-week haitus for the Rolling Wheels Half-Mile presented by Old Carriage House Apartments, and it was a long two weeks indeed for Jared Mees.

Last time out, at the Lima Half-Mile presented by Indian Motorcycle, Mees failed to make the Main Event — a race he promoted himself — after twice jumping the start during his Semi race. Adding insult to injury, he lost his AFT Twins presented by Vance & Hines championship lead in the process to rival Bryan Smith (No. 1 Indian Motorcycle Racing backed by Allstate Scout FTR750).

On Saturday night, in front of another packed house at Rolling Wheels Raceway Park, Mees took out all of those pent-up frustrations on the field. He obliterated all challengers aboard his No. 9 Indian Motorcycle Rogers Racing Scout FTR750 en route to claiming his fifth checkered flag of the 2017 campaign with a near five-second margin of victory.

Mees was forced to deal with rival Sammy Halbert (No. 69 Estenson Logistics Harley-Davidson XR750) on the race’s opening lap. The two banged bars as they jostled for the inside on Lap 1, with Halbert diving into the lead heading into Turn 3. Mees squared up the turn and slotted back underneath to reacquire the position by the completion of the first lap. The three-time Grand National Champion continually worked up his advantage from there, steadily stretching it out before finally taking the win with 4.918 seconds in hand.

The victory marks the 25th of Mees’ career. It also saw him complete an in-season Grand Slam with triumphs across all four disciplines (TT, Short Track, Mile and Half-Mile) in 2017, with eight races still remaining on the calendar.

Now back in control of the title fight, Mees said, “(Lima’s) behind us. That was my mistake, my fault, and I needed to come back and do exactly this. I had two long weeks to think about my mistake.

“My team means the world to me. They never stop – just like me. We work extremely hard… you’ve definitely got to put in the hard work. We were good out of the box. From the first lap in practice to the last lap in the Main Event, I feel like we were the dominant guy and it showed.”

Sammy Halbert (No. 69 Estenson Logistics Harley-Davidson XR750) posted his second runner-up finish of the season, his last coming after a race-long battle with Mees at The Red Mile in Lexington last month.

He said, “We put up a fight, but it only lasted a lap, unfortunately. Me and Jared were banging elbows before we even took off for the start. We were both trying to squeeze each other out. I got a great start, and that first lap was aggressive. I got him going into [Turn] 3, side-by-side, but he shot underneath me in [Turns] 3-4 and pushed me out pretty wide. I had to roll out of her to keep her off the fence.

“He was just going better than me today. I hung with him for quite a while but just didn’t have it when it came down to it.”

Brad Baker (No. 6 Indian Motorcycle Racing backed by Allstate Scout FTR750) picked up his seventh podium result of the year but had to work for it in the end. A seemingly lonely third was made considerably less when Baker was joined on his rear wheel by Jeffrey Carver Jr. (No. 23 Carver’s BBQ Kawasaki Ninja 650) late in the contest.

Carver had been forced to slice his way up from outside the top five, dispatching a number of the sport’s big names as he climbed the order. However, despite managing to close the distance on Baker, finding a way past proved too tall an order to accomplish before they took the checkered flag.

Third-place finisher Baker said, “Any time you’re on the box it’s a good night. Typically, tracks like this are not ones I shine on. I did pretty poor here last year, so to get on the podium on the Indian Motorcycle Racing backed by Allstate Scout FTR750 feels really good. I was in a race of my own for the most part. I tried to settle into third and pick off my laps, but Jeffrey caught up to me at the end and gave me a little bit of a fight. It was a good race.

“I’ve been consistently on the box this year, so that’s really good, but I still haven’t gotten a win yet. I’d really love to do that here one of these races.”

Brandon Robinson (No. 44 Harley-Davidson Factory Flat Track Team XG750R) made it two Harleys inside the top five, edging Lima winner Briar Bauman (No. 14 Zanotti Racing Kawasaki Ninja 650) by 0.119 of a second for fifth.

Smith endured his worst finish of the season in seventh. He relinquished the points lead to Mees as a result, and now trails his rivals by eight points (202-194). After opening the year red hot with four wins, a second, and a third in the season’s first six races, Smith finds himself in something of a cold streak – at least by his lofty standards. In his last four outings, he’s tallied up results of fourth, third, sixth, and seventh.

AFT Singles
Shayna Texter (No. 52 Richie Morris Racing Honda CRF450R) continued to stamp her authority on the AFT Singles title fight with a wire-to-wire victory at the Rolling Wheels Half-Mile.

An expected shootout with Kevin Stollings (No. 99 Ben Evans Honda CRF450R) failed to materialize, as Stollings dropped outside the top five early while Texter controlled the race from the front throughout.

The victory is Texter’s fourth on the season, and increases her series leading all-time AFT Singles wins record to 10.

“It was incredible,” Texter said. “I just tried to go out there and run as hard as I could for 15 laps and not look back. This is my fourth win of the year, but this one is super special because it’s the first time my mom and my step-dad were able to make it out to a race in some time. It’s incredible to get a win in front of them.”

Wyatt Anderson (No. 120 Waters Autobody Racing KTM 450 SX-F) did manage to at least keep Texter honest in second. The runner-up result is his second such finish of the season, backing up his outstanding performance in the season-opening Harley-Davidson DAYTONA TT presented by Politis & Matovina.

Kolby Carlile (No. 36 Kolby Carlile Racing Honda CRF450R) rebounded from an unlucky Lima Half-Mile to land on the podium in front of his home fans. His third-place finish also sees him move back in front of Brandon Price (No. 92 DPC Racing/Don’s Kawasaki KX450F) for second in the points standings, albeit some 32 points behind Texter.

Stollings ultimately came home in fourth after being shuffled down as low as seventh in the race’s early stages.

Next Up:
American Flat Track will complete its run of three consecutive Half-Miles with the Harley-Davidson Calistoga Half-Mile in Calistoga, California, on July 29.

September 30, 2020 Michael Le Pard News Comments Off on MotoGP Suzuki powered their way to double podium at the Circuit of Barcelona-Catalunya

Movistar Yamaha MotoGP’s Maverick Viñales and Valentino Rossi kicked off the first Asian flyaway race weekend today, at the Chang International Circuit. They made the most of the morning 45-minute practice session with a perfect […]