The Red Bull Honda World Superbike Team has completed the penultimate event of the 2017 World Superbike season, with Takumi Takahashi and Davide Giugliano 15th and 17th, respectively, at the end of the shortened second encounter of the weekend.

The initial race was red flagged on the second lap after the crash involving Eugene Laverty and Chaz Davies at turn two immediately after the start. Just like yesterday, a new event of 19 laps was called by race direction, which got underway after a short break.

Giugliano got a good launch from row six and was thirteenth at the end of the opening lap. The Italian rider then lost a handful of places after having to avoid Savadori – who crashed in front of him and – dropped down to 18th, right behind his team mate Takumi Takahashi.

At the end of lap four, the Italian rider returned to the pits after experiencing some braking issues, before making his way back to the track on fresh tyres to collect some more data for the team.

Meanwhile, Takahashi was involved in a battle with Riccardo Russo, which lasted almost the whole encounter. The 27-year-old Japanese rider made a move on his rival with three laps to go and successfully defended his position to claim one more point in the series.

The final round of the 2017 FIM Superbike World Championship will take place at Qatar’s Losail International Circuit in a fortnight’s time. 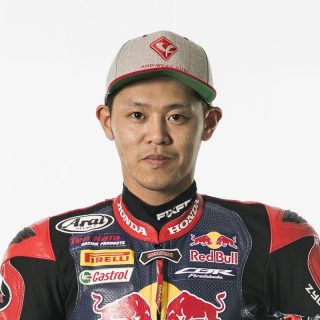 In the first part of the race I could not make the most of the new tyres, so it took a while before I could improve my pace. I also experienced some arm pump, which surely didn’t help. I’m happy to have at least scored a point, even though I was aiming for a better result today. I really want to thank the team for their support and effort, it was a great experience to work with them this year and, who knows, maybe one day our paths will cross again.

Obviously this hasn’t been the type of end to the weekend we were looking for, especially after showing a little step forward this morning in warm up. I’m glad that I was able to avoid Savadori when he landed in front of me after coming off. But that obviously cost me time when slowing down to avoid him, although I was already having some braking issues that forced me back to the pits early on. We decided to get back on track with new tyres and I hope I was able to give some useful data to the team ahead of Qatar.

It was an eventful race, no doubt. Many things happened today that prevented us from performing the way we wanted, and we definitely have to take a look back at all happenings in order to get back in the right direction for the season finale. Davide looked a bit more comfortable on the bike this morning but a braking issue put him out of contention for a finish in the points from early on. Hopefully the data we collected after he returned to the track will help us for the future. We want to again thank Takumi for his professionalism; it was great to have him with us and we know he gave his best in what was a quick transition to a very different series.

Sunny & Dry / 25
Sunday 22 Oct 2017, 12:03 UTC
About Michael Le Pard 7470 Articles
"Mr. Totalmotorcycle". Owner and Founder of Total Motorcycle. Supporting over Motorcyclists and Motorcycling for 23 great years. Total Motorcycle is my pride and joy and being able to reach out 375 million people has been incredible but I could not have done it without the support of my visitors, readers and members, thank you so much! You are making a difference to millions of riders worldwide. Thank you.
Website Facebook Instagram Twitter YouTube LinkedIn

LAST ROUND OF THE FLY AWAYS IN MALAYSIA

October 31, 2018 Michael Le Pard News Comments Off on LAST ROUND OF THE FLY AWAYS IN MALAYSIA

Team Suzuki Press Office – October 31. The Malaysian GP will be the penultimate round of the season, and also the last one of the long series of fly aways – part of an exciting […]