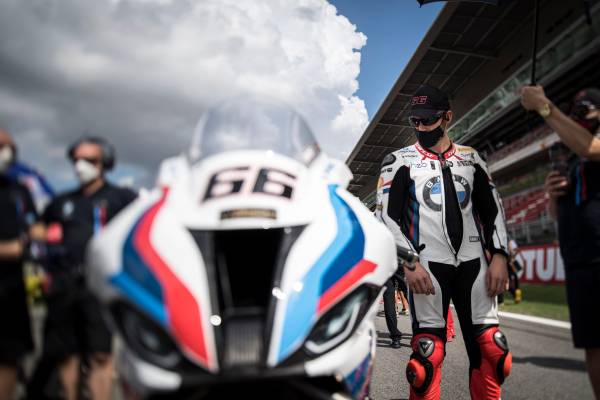 Barcelona. A first for the FIM Superbike World Championship (WorldSBK). The sixth event of the 2020 season saw the WorldSBK make a first visit to the ‘Circuit de Catalunya’ near Barcelona (ESP). The Saturday was characterised by highs and lows for the BMW Motorrad WorldSBK Team. Tom Sykes (GBR) claimed fourth place on the grid with his BMW S 1000 RR in Superpole qualifying but had to retire from the race. Eugene Laverty (IRL) finished the first race in eleventh place.

It had rained before Superpole qualification and the track was still drying. Sykes gave another strong performance and fourth on the grid represented a good starting point for the race. However, he fell back a bit during the confusion at the start and finished lap one in sixth place. Shortly afterwards, he was forced to head for the pits due to a technical problem and then retire from the race.

His team-mate Laverty finished Superpole in twelfth position. Laverty was able to move up at the start but then lost some positions to fall back to 16th for a while. He then started the chase from there, moving up to 14th by the end of lap eight and then improved further during the closing stage. He crossed the line in eleventh place.

Quotes after race one at Barcelona.

Marc Bongers, BMW Motorrad Motorsport Director: “On behalf of the team, I can only apologise to Tom. We are struggling with problems that occur sporadically and we have not yet been able to get the bottom of these issues or to fully understand them. We will be changing the complete system for tomorrow. Eugene also had a small technical problem with the tank ventilation at the start of the race, which meant that he could not match the pace to start with. However, he was able to catch up in the closing stage and at least he managed to reach eleventh place. In summary: from their speed, both riders could have achieved much more but some unacceptable defects prevented this. We will do everything to discover the reasons for this and avoid further disappointments.”

Eugene Laverty: “It was a disappointing day. After the rain before Superpole, the track was incredibly slippery in the dry conditions, so we could not find any grip and qualified down in P12. During the opening lap of the race I found myself in tenth, which was okay, but unfortunately we had a technical problem as every time on the straight I was getting covered in fuel spray from the ventilation of the full tank so I couldn’t see properly. As a result, I was losing half a second per lap, but I didn’t want to give up. It takes a lot for me to throw the towel in and I wanted to keep going. Fortunately, whenever the fuel load came down, the fuel pressure issue went away so I was able to manage the issue until the end of the race and grab 11th.”

Tom Sykes: “Unfortunately, it’s been a bit of a challenging day. We had an issue at the beginning of Superpole which was far from ideal, and as the track had been wet earlier in the session and was drying out, we needed the track time to understand the limitations of the circuit before putting the qualifying tyre on. Luckily, we were able to salvage a decent lap time on the BMW S 1000 RR even after a few mistakes and were able to start in fourth position. In yesterday’s free practice, we did a lot of work towards the race, so we felt well prepared in the dry and wet conditions. So I was looking forward to the race. Unfortunately, on the sighting lap we suffered again with another electrical issue. Obviously I tried riding the first few laps to see if I could slot into a position but the bike was unmanageable with no traction control and there was a bit of inconsistency on engine braking. By that point I had lost that many places it was pointless staying out so I decided to come in to try fix the issue so that at least we could collect some data along the way. That was not to be. There’s work to be done but we will keep focused and try gather some momentum going into tomorrow’s two races.”