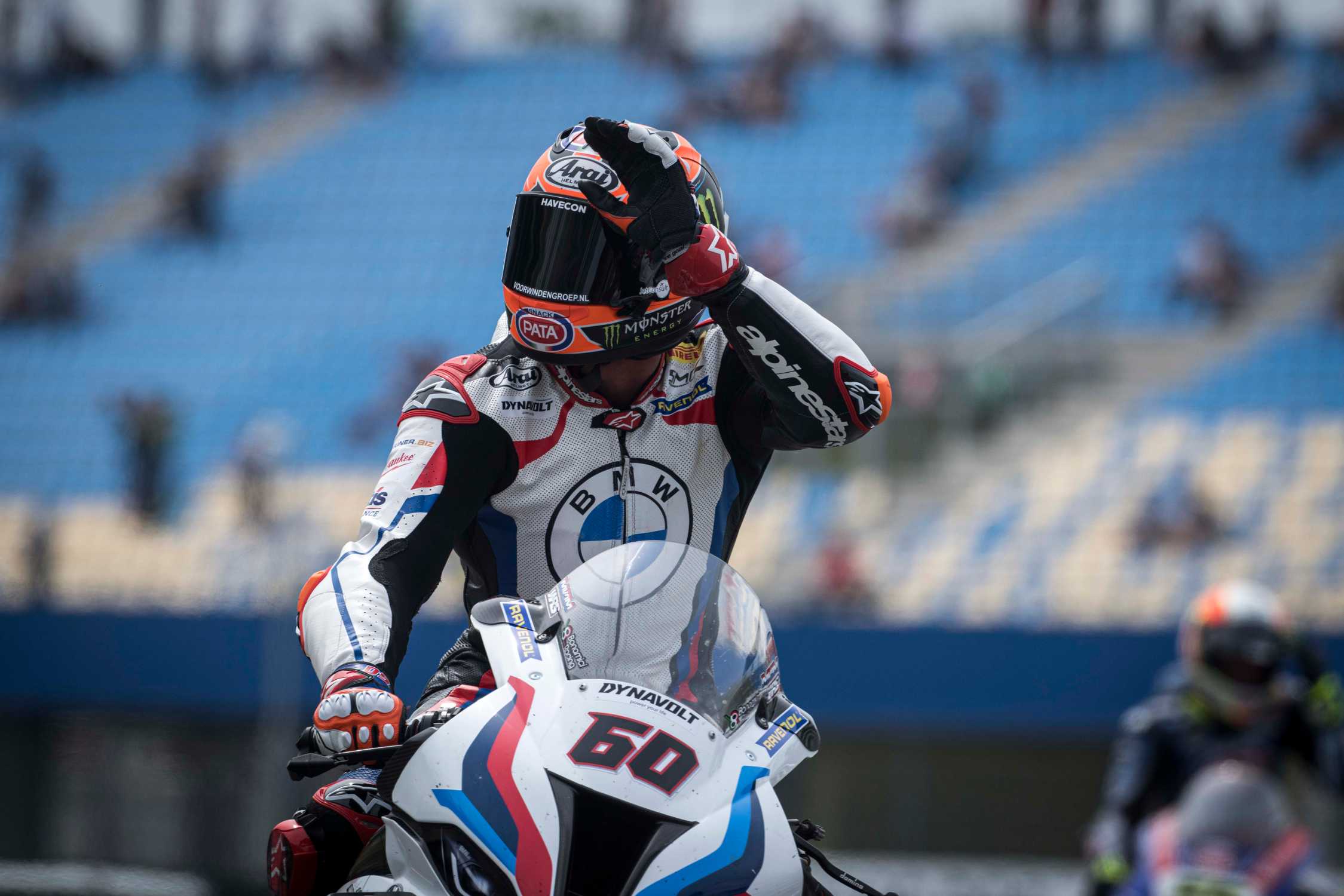 Assen. BMW Motorrad Motorsport gave a strong performance in Saturday’s race at Assen (NED) to confirm the upward trend in the FIM Superbike World Championship, but a serious accident for Jonas Folger (GER) overshadowed the good results. Running in seventh place, the rider from the BMW satellite team Bonovo MGM Racing crashed out just before the finish. After initial examinations in the Medical Centre, Folger was transferred to hospital for further checks as a precautionary measure, which he was able to leave again in the meantime. Michael van der Mark (NED) from the BMW Motorrad WorldSBK Team was fourth in the first race on his home circuit. His team-mate Tom Sykes (GBR), who started from 20th on the grid, was classified seventh.

Folger had been the fastest BMW rider after a strong performance in the morning’s Superpole. He claimed sixth spot, on the second row of the grid. Van der Mark finished Superpole in ninth place. Sykes endured some back luck, as a technical issue prevented him from taking to the track until the end of the session. He chalked up the second-fastest time but the lap was not classified as it had begun just a few fractions of a second too late. As Sykes’ time did not count, he had to start from 20th on the grid.

All three BMW riders gave impressively strong performances in the race itself. At the start, Folger defended his sixth place, van der Mark fell back for a brief period and Sykes moved up five positions straight away. However, van der Mark sprinted quickly up through the field, reaching fifth place on lap three. One lap later, he was in fourth and intent on closing the gap to the leading trio. Folger held on to sixth spot before dropping down one place on lap 16. Meanwhile, Sykes continued to work his way up through the field from the back, reaching eighth position. Folger, however, crashed out two laps before the end, leading to an immediate red flag.

Quotes after race one at Assen.

Marc Bongers, BMW Motorrad Motorsport Director: “The most important thing is that Jonas is doing pretty well after that fall. That was a day of mixed feelings for us. We had to switch Michael’s engine in the morning and he was unable to participate in the third free practice session. We had a technical problem with Tom during qualifying. We were able to fix that and he still recorded a fast lap, which would have been good enough for second place but the lap was not classified as he crossed the line just shortly after the end of the session meaning that he started from 20th on the grid. After missing out on practice, Michael put in a good lap to secure ninth place in qualifying. Jonas was doing really well and it was great to see him placed so high up. At the start of the race, Michael was pushed wide on turn one and fell back to 13th place, but he recovered from that very quickly and finished fourth in the end, 1.2 seconds away from the podium. That was a really strong performance, which we had not expected after this morning. Tom also rode a very good race after starting at the back. In the second half of the race, he was the fastest rider out there with his lap times. Starting from sixth on the grid, Jonas was able to keep pace very well and we could see that the work had paid off. Unfortunately, he crashed out on one of the fastest corners on this circuit and slid under the air-fence. We were glad to get the news that he is doing well after some initial examinations. We will start from the same positions tomorrow but if we produce the same level of performance in the race as we did today, we are well set to aim for a podium finish.”

Shaun Muir, Team Principal BMW Motorrad WorldSBK Team: “Both riders really showed their fighting spirit. After having missed this morning’s FP3, Michael struggled a bit in Superpole to make best use of his tyre so he did a really good job to put it on the third row of the grid. Tom sadly had a technical issue, and to miss the chequered flag by so narrowly and his lap, which would have put him second on the grid, not counting really was cruel luck for him. So he had to start from the back but both riders did a fantastic job in the race. Michael lost a lot of time coming together with Lucas Mahias in a typical first corner melee but fought back very well. I think if it wasn’t for that he could have been in the battle for the podium positions because finishing just a bit more of a second behind when the red flag came out showed how much progress he had made. And equally Tom came through very well from the grid. We will take that result and build on that. Tomorrow is another day and overall it has been a good job in the circumstances. I am very proud of the guys and all the hard work they have done on and off the track. We are looking forward to tomorrow.”

Michael van der Mark, BMW Motorrad WorldSBK Team: “It was a tough Saturday, to be honest. This morning, I did not do any laps as we had a mechanical problem and so we went straight into Superpole. We thought we can do two laps with the qualifying tyre but I could just do one so it was quite tough. P9 on the grid wasn’t great, and also my start was not the best. I had some wheelieing and lost some positions there, then I got a bit of wrangling with another rider going into turn one and the first lap wasn’t really clean, but then straight away I had a good pace and I managed to pass some riders one by one. At the end I had a similar pace as the guys in front of me who were fighting for the podium but I just could not get any closer. We need to find a little bit extra grip to have the pace so I can battle with them.”

Tom Sykes, BMW Motorrad WorldSBK Team: “It has been a little bit of a character building day. We have been unlucky in Superpole and that set the scene for the opening race today. We had a slight technical issue; fair play to the marshals who brought the bike back. The boys did an unbelievable job to get me back out there and we managed to get a lap in which was good enough for second position on the grid but unfortunately it wasn’t to be. Then at the start of the race, we made an acceptable first lap and away we went. Unfortunately we had some limitations, I feel we had an issue which made it difficult for me to consistently make the apex. We will check that and again, we understand the bike a little bit more. For tomorrow we will make some changes. Overall, it was again a strong showing from BMW from a not so good start position. Michael rode a very strong race and it is just proof that we have been working hard.”

Yamaha Motor Europe and Dorna WSBK Organization (DWO) are delighted to confirm the first 24 entries into the Yamaha R3 bLU cRU European Cup, while a further six youngsters are on standby, with registration remaining […]