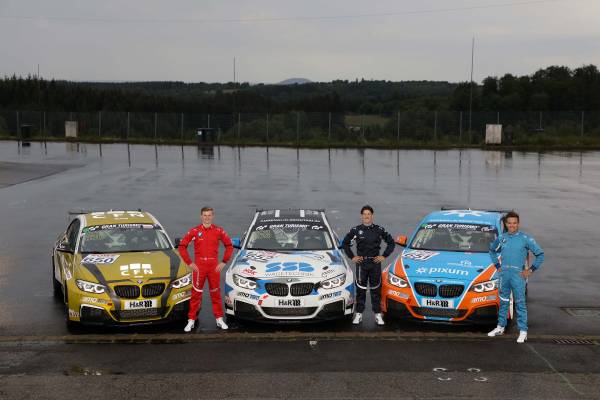 Munich. After several months of working from home during the enforced break in racing, the BMW Junior Team is now set for its first race together. Dan Harper (GBR), Max Hesse (GER) and Neil Verhagen (USA) will drive a BMW M240i Racing at the opening round of this season’s Nürburgring Endurance Series (NLS) on 27th June as they enter the next phase of their training. Last Monday, under the watchful eye of mentors Jochen Neerpasch and Dirk Adorf, the trio successfully passed the obligatory permit test ahead of its race debut on the Nordschleife (GER).

Harper, Hesse and Verhagen each spent the past few months at home, but recently returned to Germany, where they moved back into their shared house near the Nürburgring. They will live and, above all, race together there for the full season. They got their first laps at the wheel of a BMW race car under their belt last Monday, at the permit test on the Nordschleife. They were accompanied by their mentors, Jochen Neerpasch and Dirk Adorf. The Juniors had previously learned all they needed to know about the track from their virtual starts in the BMW SIM M2 CS Racing Cup and the Digital Nürburgring Endurance Series powered by VCO.

Now that the BMW Junior Team has acquired permission to race in the NLS, it will initially take to the track in a BMW M240i Racing when the season gets underway on 27th June. As soon as the Juniors have completed enough laps in this car, they will move on to the BMW M4 GT4, in which they will contest the 24-hour race in September. Provided everything goes to plan, they can then look forward to their first race outings in the BMW M6 GT3.

“My first experience in the BMW M240i Racing on the Nordschleife was absolutely incredible,” said Verhagen. “When I went out for the first laps on what is by far the most technically demanding circuit I have ever experienced, I just thought ‘wow’. At the same time, however, it was immediately clear to me that this was my new favourite racetrack. On the whole, I am very happy to have the permit in the bag and am really looking forward to the first race.”

Hesse said: “It felt great to finally get back behind the wheel of a race car. We got a lot of laps under our belt and were able to get to know the Nordschleife in both wet and dry conditions. Looking ahead to the race and the weather in the Eifel region, which is often unsettled, that will definitely be very helpful. Generally speaking, I am proud to be able to fly the BMW flag on the racetrack and to be a part of this team.”

Harper is someone else who can hardly wait for his first race outing in the BMW M240i Racing. “After so many months without any races, the test really went rather well. It was fantastic to do the first few laps on the Nordschleife and to get the permit. That was our primary goal – and we achieved it. Next up is the first race which I am very much looking forward to.”

Gerloff Scores Another Win, Beaubier a Pair of Podiums in Pittsburgh

August 27, 2019 Michael Le Pard News Comments Off on Gerloff Scores Another Win, Beaubier a Pair of Podiums in Pittsburgh

It was a positive weekend for the Monster Energy Yamalube Yamaha Factory Racing Team, with Garrett Gerloff taking a thrilling victory in race one, and Cameron Beaubier scoring a pair of podiums at the Pittsburgh […]

The Pata Yamaha Official STK1000 Team are looking forward to resuming their challenge for the 2017 FIM Superstock European Championship this weekend at the Lausitzring, round six of the season. Florian Marino currently occupies […]