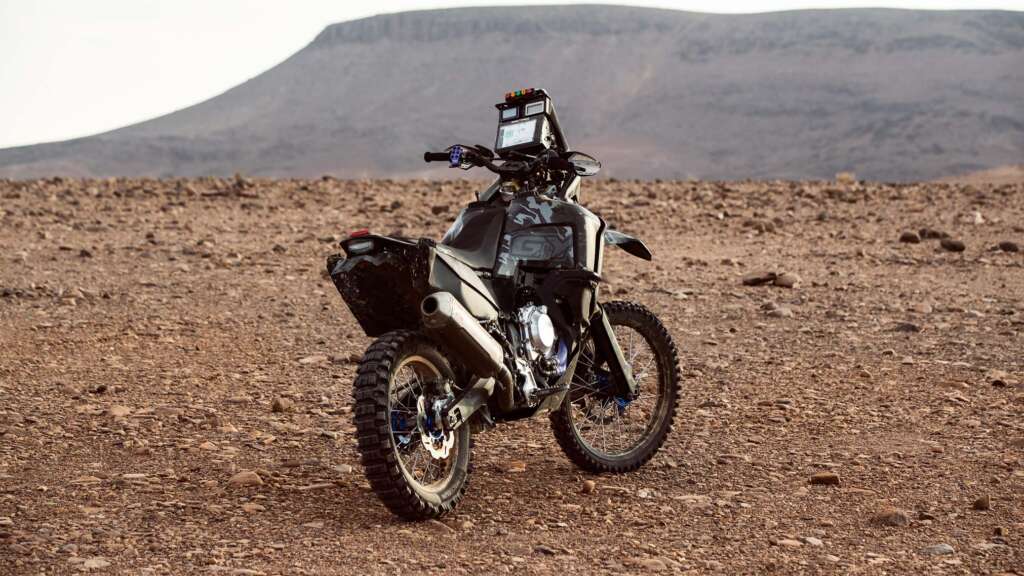 With the start of the 2022 Dakar Rally now just hours away, Yamaha Motor Europe are pleased to confirm the entry of three YXZ1000R Prototypes into the world’s most prestigious rally event, prepared and run by German rally raid vehicle development and preparation specialists X-raid.

Continuing what was started at the 2021 Dakar Rally, when X-raid fielded two YXZ1000R Prototypes, following further development of the pure sport-focused YXZ1000R during the 2021 racing season, for 2022 three Yamaha Powered by X-raid Team prototype vehicles will be entered into the event.

The X-raid developed YXZ1000R Prototype side-by-side vehicle is based on the production Yamaha YXZ1000R. Wider than the original chassis, and with a longer wheelbase, the centre of gravity has been lowered to maximise grip and improve stability. A new tubular chassis gives greater strength and is designed to meet FIA regulations while maintaining the instantly recognizable YXZ1000R body design, partly recreated from lightweight materials such as aluminium and carbon fibre.

The driveline and 998cc DOHC inline three-cylinder engine remains largely unchanged, with the exception of various GYTR (Genuine Yamaha Technology Racing) parts fitted to further improve performance. Ease of engine and gearbox serviceability has been improved by use of various sub-frames, critical in self-supported long-distance rallies.

To deal with the rough terrain, X-raid has extended and reinforced the front and rear suspension arms, allowing the shock absorbers to be moved outwards, creating more stability. The uprated braking system further improves the YXZ1000R prototype’s performance.

With 12 Dakar rally finishes to her credit, Camelia Liparoti claimed a hard-fought second place result in the T3 Light Weight Prototypes class in 2021. Also, a six-time world champion in the women’s quad category of the FIM Cross-Country Rallies World Championship, Camelia is an integral part of the development team behind the latest version of the Yamaha YXZ1000R Prototype.

First competing in the Dakar Rally in 2019, Annett Fischer initially completed the event as a driver before switching to a co-driver role, earning an impressive runner-up result together with Camelia Liparoti in the light prototype (T3) class in 2021. For 2022 Annett returns to the driver’s seat for her fourth participation, joined by experienced women’s motorcycle racer Annie Seel as her co-driver.

With an envious list of international motorsport successes including no fewer than six Dakar Rally victories, X-raid are a driving force in rally raid competition. Founded in 2002, the German rally raid vehicle development and preparation specialists have secured 11 FIA World Cup for Cross Country rallies titles. In recent years, under the direct guidance of company founder Sven Quandt, X-raid have championed the increasingly popular side-by-side class, highlighting the capabilities and performance of side-by-side vehicles, developing the Yamaha YXZ1000R Prototype together with Yamaha Motor Europe.

The 2022 Dakar Rally starts tomorrow, January 1, before taking competitors on an 8,106-kilometre adventure over 12 days. Beginning with a short 19-kilometre prologue, the event will truly begin on January 2 with a looped 514-kilometre route that includes a 333-kilometre special stage. On January 8 competitors will enjoy the event’s one and only rest day, before a second gruelling week of competition will see racers head out from Riyadh and start to make their way back to the finish line in Jeddah.

Sven Quandt – Founder and CEO of X-raid
“The side-by-side market is still a fast-growing market in T3 and T4. Despite some unbalance of the power to weight ratio in the T3 class, we decided to go further with the Yamaha YXZ development. We are happy to bring this year three of our latest version prototype Yamahas to the start of the Dakar. With many small changes to last years’ Yamaha YXZ, and even a package to optimize the aerodynamics of the vehicles, we are proud to present the latest version at the Dakar 2022.”

Camelia Liparoti – Yamaha YXZ1000R Prototype driver
“This will be my 14th Dakar, and I couldn’t be more excited. To be racing and testing the vehicle in the toughest race in the world is an honour. This Dakar for me is not only a race but a real project, I’m more than a driver, I feel more responsibility. I feel valued and honoured to be a part of the creation of what is truly a brand-new vehicle. I have worked the whole year with Yamaha Motor Europe and X-Raid to develop this second evolution of the Yamaha YXZ1000R Light Weight prototype. It’s clearly an evolution of the prototype that I drove in 2021, but it has been seriously modified and improved since then. We’ve worked on all aspects of the vehicle: chassis, suspensions, engine, weight balance, it’s really emotional to me! The first objective will be to validate all the improvements that we’ve made, so that we can finalize the development and bring it to production. With this in mind, the second goal is to bring all the Yamaha YXZ1000R Light Weight prototype vehicles to the final stage, to the finish. As a racer, when you put your helmet on, you only want to win. Last years’ experience, finishing in second place in the T3 class, was absolutely an amazing feeling, I can’t wait to live again something similar or even better.”

Moto Machines representative for Scorpion Exhausts in the United States

May 16, 2019 Michael Le Pard News Comments Off on Moto Machines representative for Scorpion Exhausts in the United States

The addition of Scorpion Exhausts to the range of brands represented by Moto Machines is part of a growth plan focused on premium quality products for discerning riders. Scorpion Exhausts is a world leading performance […]

140°F is hot, very hot and when you are on a track in full racing leathers it is even hotter. In a 1-on-1 intervew with WorldSBK riders Alex Lowes and Michael van der Mark tell […]