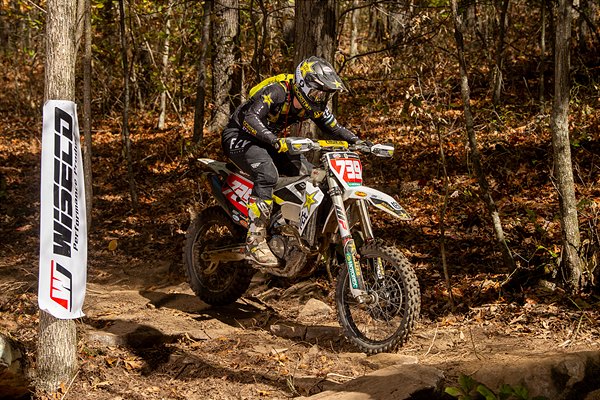 Round 12 of the Grand National Cross Country (GNCC) Series took place on Sunday afternoon at an all-new venue in Beckley, West Virginia where Rockstar Energy Factory Racing Team’s Trevor Bollinger captured a top-five finish in the rocky and technical terrain.

Bollinger got off to a fourth-place start and he bounced around just inside the top-five for the first half of the race. A big crash sent Bollinger back a couple positions on lap six and from there he spent the remaining laps trying to play catchup to the front-runners. Bollinger was able to claw his way back up to ultimately finish fifth overall for the day.

Trevor Bollinger: “I just tried to find my groove in the first few laps but it just wasn’t flowing. Once I finally got flowing there, I went down pretty hard and lost two positions along the way. From there, I just tried to regroup but it was tough because I feel like I rung my bell pretty good. I did what I could to salvage a good finish and I brought it on in for fifth.”

Bollinger’s teammate, Thad DuVall, missed Round 12 due to a knee injury sustained last week during practice. DuVall will also miss the GNCC finale on October 27. He currently holds second overall in the XC1 Open Pro Championship with one round remaining in the series.

The Ducati Team took to the track again today at the Red Bull Ring in Austria, to complete the first day of free practices of the Styrian Gran Prix of MotoGP. Fast already during the early […]

There are motorcycle brands, then there are super premium motorcycle brands. MV Agusta is the latter, but, and here is the catch, you don’t pay extra for the name, you only pay for the extra […]

Following an incredible qualifier in California, two women and three men are moving on to compete for the International GS Trophy. Later this year the USA women’s finalists will be competing in Spain for a spot […]