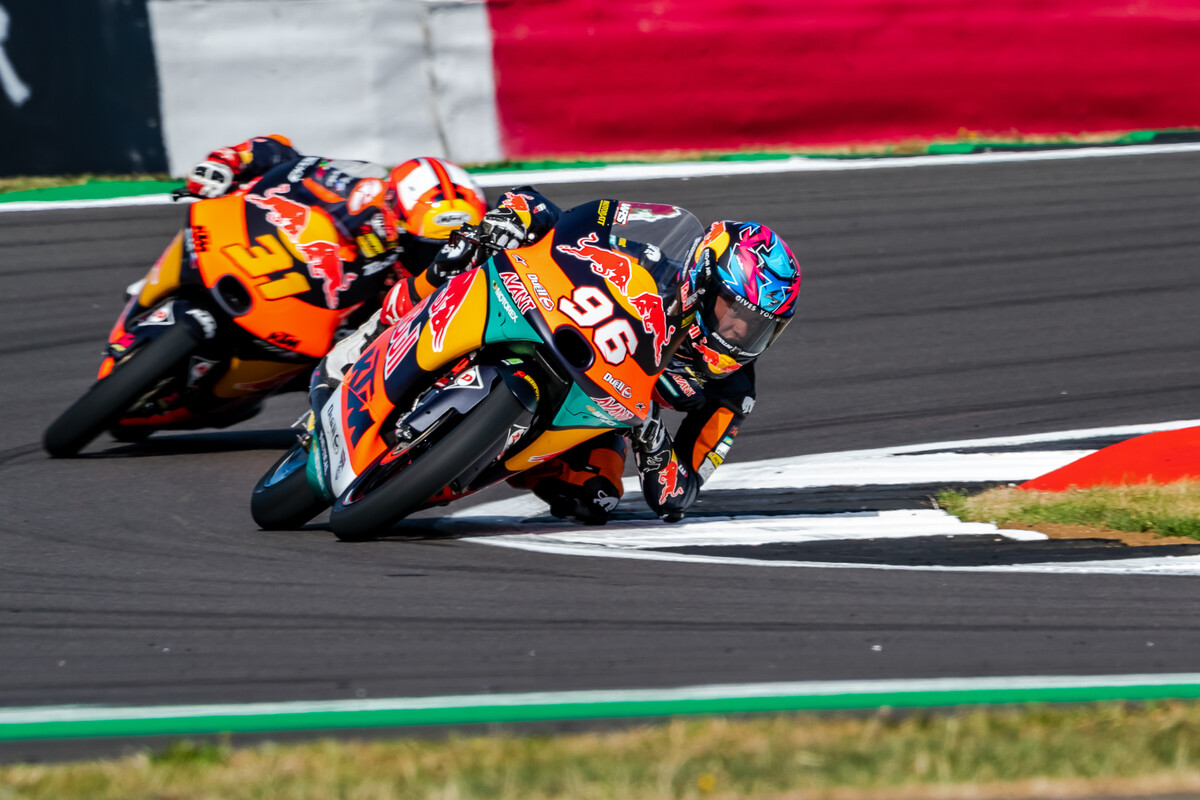 The fast, flat and relentless challenge that is the Silverstone circuit was more happy hunting ground for the Red Bull KTM teams in both Moto3 and Moto2 categories. Augusto Fernandez won for the third consecutive time in Moto2 as both Deniz Öncü and Jaume Masia rode to the Moto3 podium at the Monster Energy British Grand Prix for round twelve of the world championship.

Moto3
Jaume Masia attacked the 17-lap Moto3 race hard in the formative stages and made his way up from the rear of the grid to enter the top five. Red Bull KTM Tech3’s Deniz Öncü was a prominent figure at the front of a pack that saw the first twenty split by just three seconds for the first half of the race distance. Also in the running was promising Brazilian youngster Diogo Moreira after starting from Pole Position with his KTM RC4 for the first time.
After a sustained period of typical position swapping and close race action both Masia and Öncü were able to follow Dennis Foggia to the flag in 2nd and 3rd as one second split the top eight. A total of four KTM RC4s filled the top five. Adrian Fernandez took 15th while Daniel Holgado failed to finish.
KTM currently hold 4th and 5th positions in the Moto3 riders standings thanks to Masia and Öncü respectively.
Jaume Masia: “A really good weekend. It was diffciult to manage and not getting through Q1 didn’t help but I said to myself, “do what you can”. It was a decent race and it gives me confidence and power for the coming GPs.”
Deniz Öncü: “I’m really happy for the team to finally back on the podium. I fought hard today and was doing my pace. I tried to win but just couldn’t make it happen. I trained a lot in the summer break to improve and I want to be better. I will try again in Red Bull Ring.”
Moto2
Augusto Fernandez started the Grand Prix level on points at the top of the Moto2 championship and from his first Pole Position of the season after strong form through Free Practice and Qualification. The Spaniard, still operating alone in the Red Bull KTM Ajo garage as Pedro Acosta recovers from his training injury, calculated the 18-laps to perfection. He stalked the top four before hunting the rear wheel of race leader Alonso Lopez and struck on the final circulation to win by only seven hundredths of a second.
Fernandez now has a 13 point gap over Ai Ogura after notching four wins and five trophies in total so far.
Augusto Fernandez: “Another great victory for me and the team and this one felt really good because I read the pace of the race. I was very strong towards the end and had a great fight with Alonso. I’m super-happy.”
Austria next. The CryptoDATA Motorrad Grand Prix von Österreich represents round thirteen of the series in a fortnight and the scenic Red Bull Ring in Spielberg will again ring to the sound of motorcycle engines.
Results Moto3 Monster Energy British Grand Prix
1. Dennis Foggia, (ITA), Honda 37:30.120
2. Jaume Masia (ESP) Red Bull KTM Ajo +0.252
3. Deniz Öncü, (TUR), Red Bull KTM Tech3 +0.297
4. Kaito Toba (JPN), KTM +0.738
5. Stefano Nepa (ITA), KTM +0.762
15. Adrian Fernandez (ESP) Red Bull KTM Tech3 +21.029
DNF. Daniel Holgado (ESP) Red Bull KTM Ajo
Results Moto2 Monster Energy British Grand Prix
1. Augusto Fernandez (ESP) Red Bull KTM Ajo 37:38.670
2. Alonso Lopez (ESP) +0.070
3. Jake Dixon (GBR) +0.662
About Michael Le Pard 8212 Articles
"Mr. Totalmotorcycle". Owner and Founder of Total Motorcycle. Supporting over Motorcyclists and Motorcycling for 23 great years. Total Motorcycle is my pride and joy and being able to reach out 375 million people has been incredible but I could not have done it without the support of my visitors, readers and members, thank you so much! You are making a difference to millions of riders worldwide. Thank you.
Website Facebook Instagram Twitter YouTube LinkedIn

Team Suzuki Press Office – March 25. Yoshimura SERT Motul are to race the opening round of the 2021 All Japan Superbike Championship on April 3-4th at Motegi. Team rider Kazuki Watanabe and the team […]

Storming Start by GRT Yamaha on Friday at the Lausitzring

August 20, 2017 Michael Le Pard News Comments Off on Storming Start by GRT Yamaha on Friday at the Lausitzring

The GRT Yamaha Official WorldSSP Team enjoyed a great start to the action on Friday at the Lausitzring for round eight of the 2017 FIM World Supersport Championship. Championship leader Lucas Mahias impressed throughout the […]