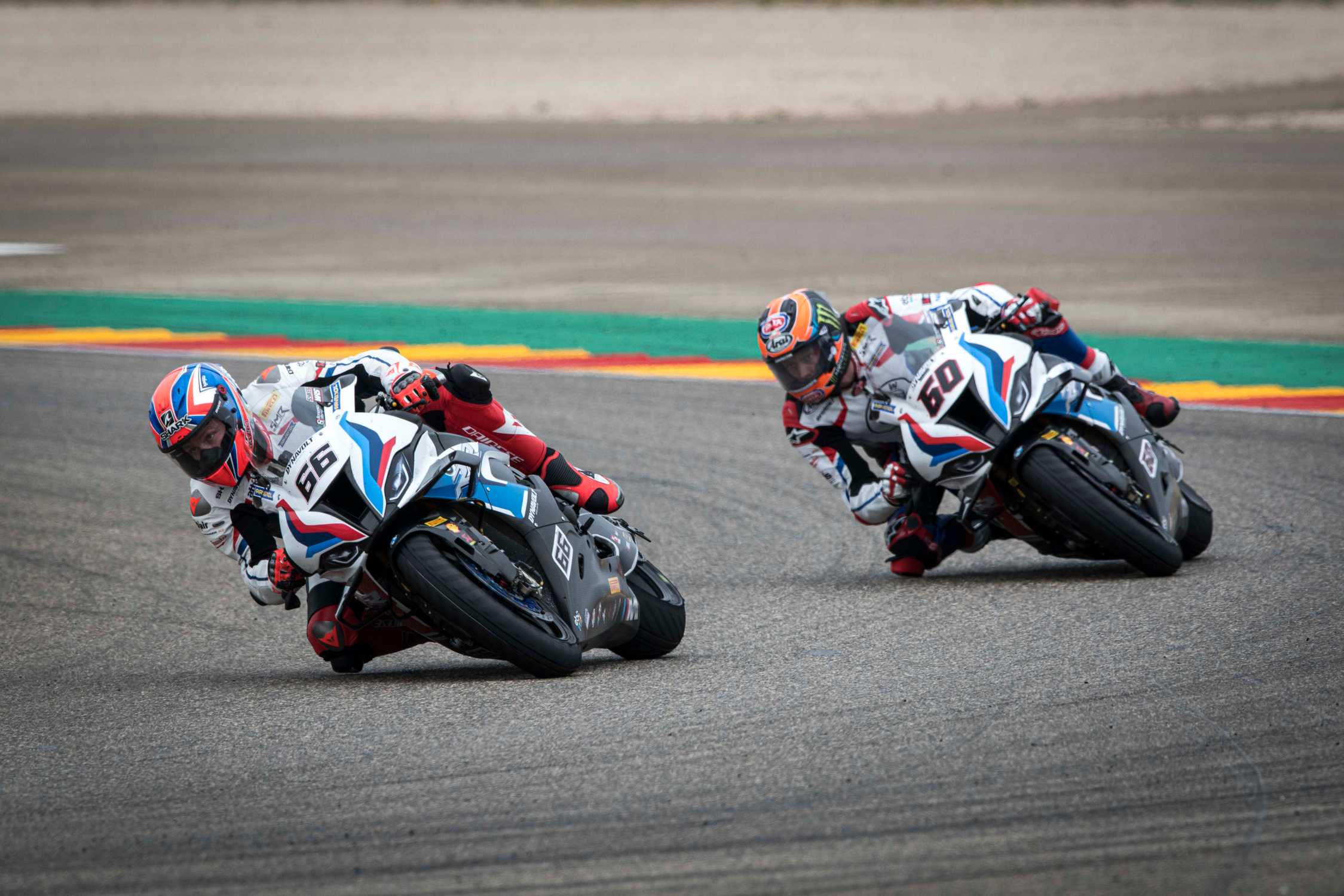 Alcañiz. The new BMW M 1000 RR has demonstrated its potential in the FIM Superbike World Championship. The BMW Motorrad WorldSBK Team claimed its best team result so far at the opening round of the 2021 season at MotorLand Aragón (ESP). Tom Sykes (GBR) and Michael van der Mark (NED) ended race two on Sunday afternoon in fourth and fifth places, just one and a half seconds outside the podium positions. Van der Mark had already impressed with a strong comeback in the morning’s Superpole race. Jonas Folger (GER) from BMW satellite team Bonovo MGM Racing finished eighth to round off a successful Sunday.

After enjoying warm and sunny conditions on Friday and Saturday, Sunday started with rain. The circuit was damp in places at the start of the Superpole race, but was also drying out in other places making tyre selection rather tricky. Van der Mark opted for slick tyres, on which he shot through from 15th on the grid to finish fifth at the end of the ten-lap sprint race. The Dutchman also set the fastest lap of the race on his BMW M 1000 RR. Sykes started from third place on the wet-weather tyre, and was initially running in the top five. However, he then fell back through the field and returned to the garage on lap eight as his tenth place on the grid for race two was secure in any case.

Conditions were similarly unsettled at the start of race two in the afternoon. Van der Mark (fifth on the grid) and Sykes (tenth on the grid) both opted for intermediate tyres. Van der Mark was battling with the leading group from the word go, and actually briefly took the lead on lap six. He then spent several laps defending second place against Jonathan Rea (GBR / Kawasaki). With just a few laps remaining, Rea and his team-mate Alex Lowes (GBR) managed to find their way past him. Meanwhile, Sykes was consistently picking his way through the field and ultimately found himself behind van der Mark. The two swapped positions on lap 16 of 18, meaning Sykes finished fourth, ahead of his team-mate in fifth.

Folger ended the Superpole race in 13th place, having started 18th. His big moment came in race two. He and the Bonovo MGM Racing team opted for slicks. Folger initially had to restrain himself and dropped down the field. However, he then launched an impressive comeback. On the final lap, Folger had climbed into sixth place, behind the two riders from the BMW works team. Shortly before the chequered flag, he lost two positions due to a small mistake, meaning he crossed the finish line in eighth place. Eugene Laverty, riding for BMW satellite team RC Squadra Corse, was 16th in the Superpole race and ended race two in 17th place.

Marc Bongers, BMW Motorrad Motorsport Director: “We are very happy. We invested so much work in this project in the winter, and it was very difficult at the tests to establish exactly how we really compared to the others. We got off to a difficult start this weekend, so it is great to be able to turn that around in this way. Sure they were extraordinary conditions, but it was very pleasing to see that we were able to challenge the Kawasakis, which are setting the benchmark, for the full race. There were obviously times in the race when we would have liked to have finished on the podium, but it is excellent that we were able to demonstrate with two or even three bikes that we have the potential to do that. It is a strong result, on which we can build. We are super happy. The work has paid off, but we will not stop here – we will continue to work hard.”

Shaun Muir, Team Principal BMW Motorrad WorldSBK Team: “A great day. Yesterday it was a struggle in areas, so I was happy with how we finished the race. Today, I was struggling to see if we could improve on that, but this morning Michael went out in the morning’s warm-up in the rain and was immediately fast considering this was his first ever outing in the wet conditions on the BMW M 1000 RR. In the Superpole race, Michael had a really good run, so to see him come away with fifth was pleasing as he is learning every day when he gets on the bike. Tom had an issue with the rear tyre in the Superpole race so we had to retire but nevertheless we started in P5 and P10 in race two. That race was really exciting, to be battling for the lead and never out of the top-three, top-four places for most of the race was great to see. Both BMWs were in the spotlight and it’s testament to the whole of the BMW Motorrad WorldSBK Team who have brought this bike through. Heading into Estoril we can be confident we can be threat for the rest of the season.”

Tom Sykes, BMW Motorrad WorldSBK Team: “A bittersweet day, really. We definitely had a Superpole race to forget which we won’t go into too much detail about. That meant that we compromised our start position in race two. For race two, I wanted to go with the slick tyre but after this morning we opted to play it safe on the intermediates. Overall, after a good start, it was a bit of a waiting game. I could see what the guys in front of me were doing but obviously considering the tyres we were on I tried a different strategy to feel where the BMW M 1000 RR was working and where we had to improve. Unfortunately, we just missed out on the podium today, but considering our results here last year it is a huge improvement.”

Michael van der Mark, BMW Motorrad WorldSBK Team: “This morning, we had a wet warm-up session which was my first time on the BMW M 1000 RR in the rain, and to be honest I had such a good feeling from the first lap. The Superpole race was in mixed conditions but I opted to go with the slick tyre and in the end was the right choice. It did however keep raining at times during the race which slowed me down in places but anyway it was a good result for us. This afternoon’s race two again was a gamble on tyre choice, and I knew I made the wrong choice going up to the start as the track was drying so quickly. Despite that we made a good start, had some incredible battles taking the lead but I knew I was asking too much of the tyres and in the end some guys got past me. But we have got to be happy with the two P5 positions and most importantly the experience I’ve gained with the BMW M 1000 RR.”

Jonas Folger, Bonovo MGM Racing: “We are absolutely happy with eighth place in race two. It is class that we managed this at the end of what was a difficult weekend. The conditions were very difficult and we did not know for a long time whether wets or slicks were the best option. We opted for slicks in the end. Only very few others made the same decision, including the winner Scott Redding, and we set the same lap time as Scott. The weather obviously suited us, but we are very happy. Unfortunately, I went wide in the battle with Toprak Razgatlioglu at the end of the race, otherwise we could perhaps have finished sixth. However, eighth place was still the highlight compared to the rest of the weekend, so we are very happy.”

Eugene Laverty, RC Squadra Corse: “It was not a good day, unfortunately. We had some problems in all sessions. For the long race, I had the wet front tyre and the other riders had intermediates or slick tyres so there was no chance to move further forward. So it was really disappointing but I am looking forward to Estoril already. I said that Aragón and Estoril have been the toughest two tracks for our bike last year so we have a big challenge but we did a good job here yesterday during qualifying so that’s reason for optimism. In Estoril, we need to put our progress on paper because this weekend we weren’t able to get the results we wanted.”

Monster Energy Yamaha Factory MXGP’s Jeremy Seewer and Glenn Coldenhoff finished sixth and eighth overall at the MXGP of Turkey, round eight of the FIM Motocross World Championship, after a hot and challenging day at […]

May 6, 2021 Michael Le Pard News Comments Off on Fantastic days as WorldSBK Spanish circuit hosts opening races of the year

Alcañiz. With two weeks to go until the start of the 2021 season in the FIM FIM Superbike World Championship (WorldSBK), BMW Motorrad Motorsport has entered a crucial phase of preparations. MotorLand Aragón, the Spanish […]