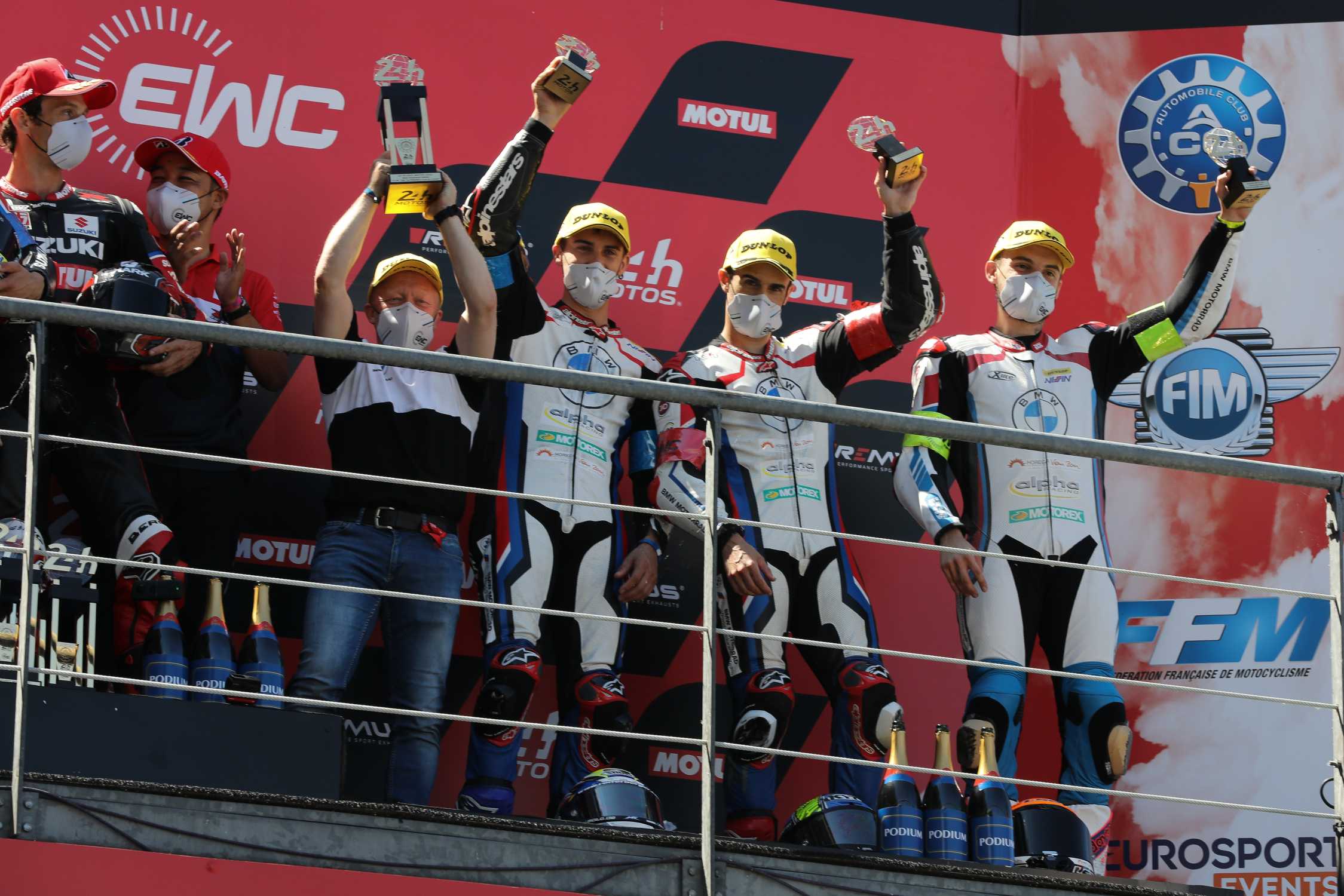 Werner Daemen’s team had previously qualified third. When the endurance classic got underway at 12:00 (CEST) on Saturday, Reiterberger made a perfect start and immediately took the lead. However, shortly after that the BMW Motorrad World Endurance Team suffered a major set-back. A problem with the fuel system led to several unscheduled pit stops. The team fell back to a seemingly forlorn 43rd place, many laps behind the leaders.

The team showed fantastic fighting spirit and the three riders impressed with a thrilling performance on the M RR. Fast lap times allowed them to gradually work their way back towards the front of the field, one position at a time. By the halfway point at midnight, the #37 was already back in fifth place. Shortly after that, Mikhalchik climbed into fourth place. On Sunday morning, the BMW Motorrad World Endurance Team found itself third and on course for a podium finish. They remained in that position until Forés brought the #37 BMW M 1000 RR home in third place after 24 hours of racing.

Round two of the FIM Endurance World Championship, the 12-hour race in Estoril (POR), will take place on 17th July.

Quotes after the 24 Heures Motos at Le Mans.

Marc Bongers, BMW Motorrad Motorsport Director: “Congratulations to the whole BMW Motorrad World Endurance Team on this fantastic effort. I followed the race from Misano, where we also line up in the FIM Superbike World Championship this weekend. However, whenever possible we had the coverage from Le Mans on the TV and I was in constant contact with the team. After the strong start from Markus Reiterberger, we unfortunately had an issue with the fuel system, which saw us drop well back down the field. At that point, you could have been forgiven for thinking that the race was over in the first hour. However, Werner Daemen’s team and our riders Markus, Ilya and Xavi did not stick their heads in the sand and accepted the challenge. It was fantastic to see how they reeled in the field from the back and consistently worked their way to the front. They more than deserved to be stood on the podium at the end of the 24 hours. It is evidence of the team’s ability and fighting spirit. After the early set-back, that was a good start to the season.”

Werner Daemen, Team Manager BMW Motorrad World Endurance Team: “I’m very proud about the result. The race by itself was not the best start because of Marcus’ small crash. We had some technical problems, and we lost about eight to nine laps. Then the riders, and the team made a good job because we were fighting back. Fortunately we got the third place – much more than we expected after the first laps. The team worked perfectly together for the whole week, and we go further like this for Estoril.”

Markus Reiterberger: “I felt very honoured to ride at the start. Even walking to the bike was good, and when I pulled away it was really good. I really tried not to let the tyres cool and to save fuel but the tyres were still not right up to temperature, which really surprised me, as it was really hot. The front wheel ultimately folded in on me in the penultimate corner and I skidded into the gravel. I then did two more laps on the damaged bike, but then had to come into the pits. I feel sorry for the whole team that I made this mistake. In the end, the crash was not that bad. The main problem was the technical issues. Once those had been resolved, we were basically flawless for the rest of the 24 hours. I would like to thank the whole team for their hard work, and my team-mates for persevering so valiantly.”

Ilya Mikhalchik: “I don’t need to say a lot of words. The job is done, and our target has become real. Everyone is happy. Hard work pays off for everyone from the team, especially for me because I’ve been working really hard since last year. Obviously I’m really happy to stand on the podium with my team and I hope we will continue the same way in the next races.”

Xavi Forés: “It was a really tough race for us. After the start, we had some issues and had to come to the garage a couple of times to solve it so we were at the bottom of the timings and then to make it to the podium felt like a victory for us. We knew that we are fast with our BMW M 1000 RR but could not automatically expect to be on the podium after the first hour. I am very grateful to be part of the team. The entire crew did an amazing job, we continued pushing and pushing until the end of the race. This third place was also very important for the championship and now we will give our all at Estoril. Thanks to all who made this possible.”

Team Suzuki Press Office – September 14. Buildbase Suzuki will get its Bennetts British Superbike Championship title assault underway this weekend, as Oulton Park hosts the first round of The Showdown. Bradley Ray, who secured […]

Team Suzuki Press Office – September 25. The fourth and final weekend of September sees the Suzuki Endurance Racing Team on track and aiming for a 16th Endurance World Championship title at the Estoril Circuit […]