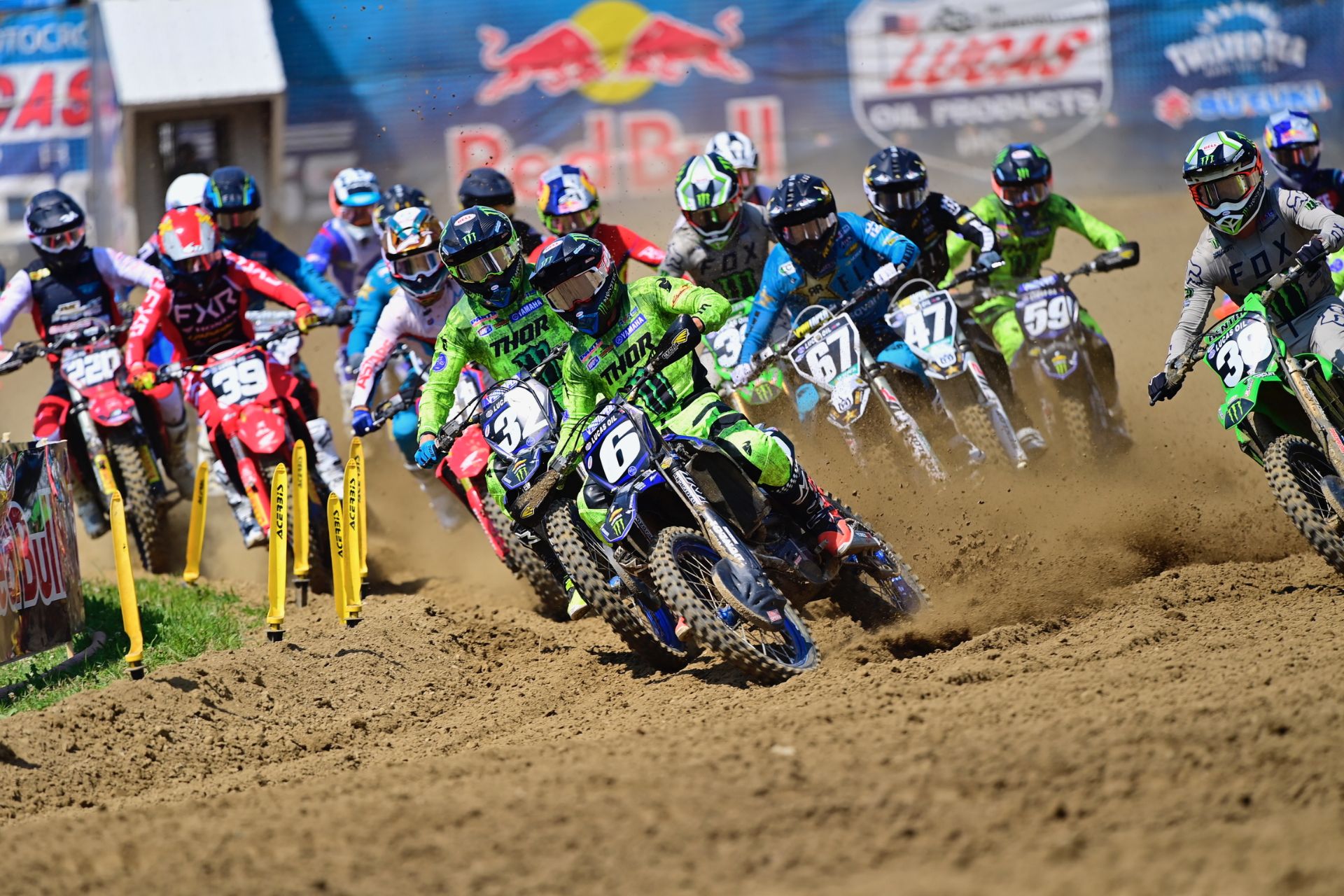 Monster Energy Star Yamaha Racing’s Jeremy Martin came out swinging with a pair of moto wins today for his first overall victory of the season in front of his home crowd at the Spring Creek National. His teammate Justin Cooper finished third overall to leave Millville, Minnesota, with the points lead in the Lucas Oil Pro Motocross 250MX Championship. Colt Nichols joined them inside the top 10 with sixth overall. Jarrett Frye broke the top 10 in Moto 1 but finished 14th overall after getting caught up in a pileup in Moto 2. Unfortunately, Nate Thrasher was sidelined after a crash on the opening lap of the first moto.

The entire team got a great start off of the gate in the first moto with all five riders in the top 10, but it was Cooper, the fastest 250 qualifier, who grabbed his fifth holeshot of the season. The New Yorker checked out and built a solid gap on the competition, but as the moto wore on he started riding tight and Martin closed in on him. Still not feeling 100%, the Minnesotan dug deep for that late moto charge and passed his teammate downhill. From there, Cooper ran his own race to secure the runner-up spot and give the team a stellar 1-2 finish.

Martin built on that first moto with a masterclass performance in Moto 2. He grabbed the holeshot and led start-to-finish to score a dominant victory with an over nine-second margin. His 37th career win in the class propelled him back inside the top five in the standings.

Cooper slotted right behind his teammate after the start, but he struggled to find his flow on a challenging track and was shuffled back to third just before the halfway mark. The third-place finish secured third overall, keeping his podium streak intact and giving him a six-point advantage in the title fight.

Nichols had a solid day inside the top 10. He steadily worked his way from eighth to sixth by Lap 4, but ultimately finished seventh. Starting eighth again in Moto 2, he quickly advanced to fifth but was shuffled back to seventh with three laps to go, ending the day sixth overall.

Frye continued to make progress, getting a great start in the first moto behind his teammates in fourth. He got shuffled back through the roster but hung on to 10th, notching his best moto result of the season. He found himself 13th after the start of Moto 2 and then, unfortunately, got caught up in a multi-rider pileup on Lap 2. The Maryland rider had to pull into the mechanics’ area before rejoining the race a lap down, finishing 29th.

Unfortunately, it was more bad luck for Thrasher. The 18-year-old had had a great start in Moto 1 and was riding in second before being collected by another rider on that opening lap. He sat out the rest of the day with an injured shoulder and will be evaluated further after the weekend.

The Monster Energy Star Yamaha Racing team heads west to Washington State for the Washougal National on July 24, Round 7 of the Lucas Oil Pro Motocross Championship at the Washougal MX Park.

“It was a bittersweet day today. Jeremy rode excellent and stamped a 1-1 for his first-ever sweep at his home track. It was an incredible day and we found a much better setting and it showed exponentially in his riding, which was very impressive. Justin executed two great starts and put himself in a great position, which resulted in us taking the red plate.

“Colt had a decent ride but was just a tick off that next group’s pace. I know he’ll put his head down and be back up there as soon as next weekend. Jarrett was much better from the first lap of practice today and improved immensely which gave him his first top-10 moto finish this year. In the second moto, he was involved in a multi-rider pileup which set him a lap down but there were more positives than negatives to take away from today. The real downside of the day was Nate injuring his shoulder. He had an excellent start and was in second but had a get-together with another rider early in the race that put him out for the day. We will get it checked out and hope to have him back out there as soon as possible.”

“It’s always special to get a win in front of the home crowd. I haven’t been doing some motos because of my wrist and broken fingers, so it was about 20 minutes into the first moto and I was definitely hurting out there. I was also getting tired there in that second moto, but the fans were so awesome; they really kept me going. I’ve been through the wringer this year, but the one thing I’ve learned is that sometimes the cards you are dealt aren’t always ideal, but you’ve got to push through it. It feels really good to get this win!”

“The track was super tricky and hard to find a good flow on, but we had fun today and did what we could. It definitely got rough for us and we struggled a little bit with the bike but scored some good points to leave here with the red plate. We will keep working hard to be better each weekend.”

“It was a tough day. The track was difficult but it was really fun to ride. I felt like I had good speed but I just ran out of steam in both motos. I’m a little disappointed with that, but we’re going to keep plugging away to get better and keep our head high!”

“I had a better day going at Millville. I qualified 11th and then had a good start in Moto 1 and finished 10th. In the second moto, I got caught in that pileup and that was it for the day. I’m taking the positives from the day and moving on to Washougal.”

“I’m just so bummed. I got a great start but had some more bad luck and I hurt my shoulder. We’re going to keep our head high and go get looked at when we get home and hopefully will be back stronger than ever.”

About Michael Le Pard 8208 Articles
"Mr. Totalmotorcycle". Owner and Founder of Total Motorcycle. Supporting over Motorcyclists and Motorcycling for 23 great years. Total Motorcycle is my pride and joy and being able to reach out 375 million people has been incredible but I could not have done it without the support of my visitors, readers and members, thank you so much! You are making a difference to millions of riders worldwide. Thank you.
Website Facebook Instagram Twitter YouTube LinkedIn

Rally Kazakhstan 2021 – Stage 4 Red Bull KTM Factory Racing’s Matthias Walkner has finished as runner-up on stage four of the 2021 Rally Kazakhstan. The result moves him up to second place overall in […]