Monster Energy Yamaha Factory Racing’s Romain Febvre and teammate Jeremy Van Horebeek were far from flawless at the fourteenth round of the FIM Motocross World Championship. The Belgian Grand Prix took place on one of the most brutal and unforgiving motocross tracks in the world – Lommel – where the duo came home in eighth and ninth, respectively. Wilvo Yamaha Official MXGP’s Arnaud Tonus dug-deep to round out the top-ten onboard the all-new 2018 YZ450F.

Lommel is touted as the gnarliest race of the year. It’s taxing on both man and machine, and has a tendency to ‘separate the men from the boys’ – as the saying goes. When the gates fell for the first race of the Belgian Grand Prix, three Yamaha’s made up the top-ten. Monster Energy Yamaha Factory Racing’s Romain Febvre was the best placed, in fifth, and led the blur of blue riders. His teammate Jeremy Van Horebeek was sixth and Wilvo Yamaha Official MXGP’s Arnaud Tonus, who was putting the all-new 2018 YZ450F to the ultimate test, was in eighth.

Many laps have been done in Lommel over the years and their first-hand experience has made them fully aware that races cannot be won in the first half of the race. Anyone who has ridden in the bottomless sand, knows, and it came as no surprise that all three riders took their time in the first 15-minutes as they settled in and found lines that would save energy in the long run.

As they entered the final stages, Febvre kept his YZ450FM light as he made the track, which was like an endless whoop section, look easy on his way past Max Nagl for fourth place. A few laps later and Van Horebeek took his turn as Nagl’s arch nemesis, and it took no more than 1-lap for the Belgian ace to out-brake and lean on the German into a chicane for fifth place. While Febvre had the upper-hand for the best part of the ‘moto’, he ended up throwing it away on the last lap when he washed the front wheel and fell back to eighth, which handed Van Horebeek fourth place in Race 1.

As a master of hard, slick, clay tracks, Tonus loathes Lommel – a track that is the polar opposite. Hard feelings aside, the Swiss sensation was incredible on the all-new 2018 YZ450F as he took the new machine to a top-ten finish in some of the most brutal conditions known to man.

The final race of the day was the ultimate test of physical and mental strength as both Monster Energy Yamaha Factory Racing riders found themselves buried in the pack at turn one. Van Horebeek was around fourteenth while Febvre was even further back in seventeenth, which meant the toughest race of the year was about to become one of the toughest of their careers.

Leaving nothing in the tank, they both had the throttles on their YZ450FM machines twisted as they took no prisoners on the charge forward. Van Horebeek was eager to do something special for his Belgian fans and climbed his way to eleventh place before making an error which dropped him back to sixteenth. From there, it was back to the drawing board.

As riders fell foul to the brutal terrain, Febvre reveled in it. The Frenchman was nothing short of impressive as he danced his way through the savage sand to cross the finish line in seventh place, and eighth overall.

Arnaud Tonus had the best start out of the three official Yamaha riders and was inside the top-ten onboard the cutting edge 2018 YZ450F.  His demonic determination and insane amount of talent saw him finish eighth, which was enough for tenth overall. Van Horebeek came home in thirteenth, and wrapped up his home grand prix in ninth overall.

The next round of the FIM MXGP World Championship will take place next weekend, on August 12th and 13th in Frauenfeld-Gachnang, Switzerland.

“My weekend was not so good although my speed was pretty good, only problem was the mistake I made on the last lap in the first race so I was very disappointed. In the second race I got a good jump off the gate but then lost some time. I don’t know why, but then I was really far back. I got back to seventh, which is okay but it is not the result I am looking for.”

“The first moto was pretty good, but I had to dig deep so I had used too much energy to finish fourth place. In the second race I had a bad start and then I crashed, and I couldn’t find my rhythm after that. It was tough, but it is always tough to get back to race pace after injuries. It’s not easy. I am really happy about the first moto, there were a lot of positive things to take away.” 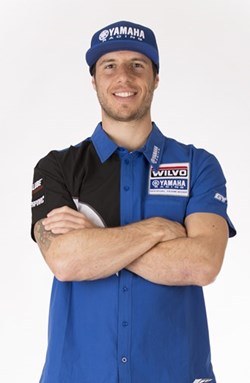 “We had a tough weekend. We had to make some changes for today after having a rough day yesterday. I am on the new bike, so it’s always tough to have a perfect setting and especially on a track like this that is so brutal. I am happy with the progress we are making with the bike. I got tenth and eighth in the moto’s, which is okay I suppose, but there is still some work to do. Overall, there are a lot of positives to take away from this weekend and I look forward to lining up for my first ever home grand prix in Switzerland next weekend.”

Febvre Out for Assen

September 12, 2018 Michael Le Pard News Comments Off on Febvre Out for Assen

Monster Energy Yamaha Factory MXGP’s Romain Febvre, who crashed out of the Turkish Grand Prix 10 days ago, will not participate in the MXGP of The Netherlands that will take place at the Dutch TT […]

Yamaha Riders Set for Strong End to the Season