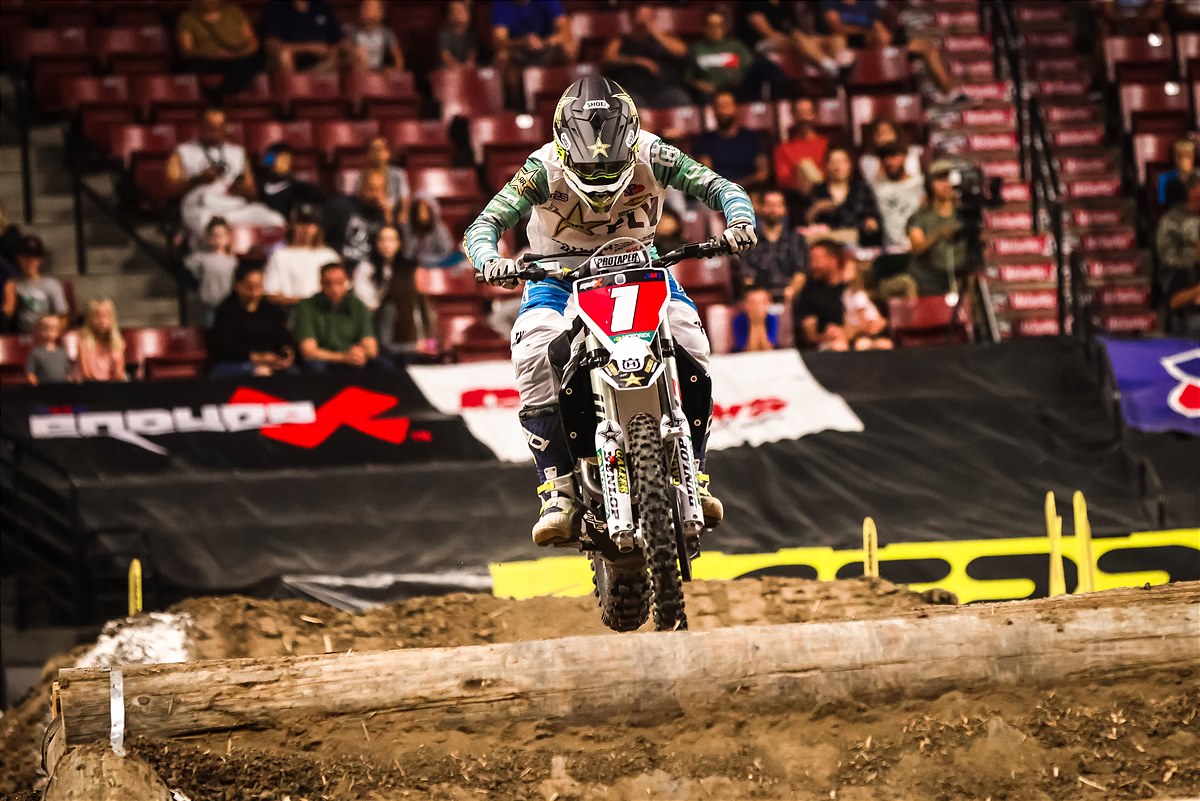 Rockstar Energy Husqvarna Factory Racing’s Colton Haaker claimed a sixth-place finish at the opening round of the 2022 AMA Endurocross Series, held at the Maverik Center in Salt Lake City, Utah. The five-time reigning series champion battled the challenging terrain alongside an international lineup of enduro stars, maintaining a consistent and strong pace to kick off his bid for a sixth-career title.
The day didn’t start off as planned for Haaker, as he suffered a costly crash in the Hot Lap, which seeded him with the last gate pick for the first moto. Always up for a challenge, Haaker charged into the top-five early on but a mistake on the K rail sent him flying upside down off the obstacle and back to 10th. In the end, he worked his way back up to a sixth-place finish. Starting from the second row in Moto 2, Haaker had his work cut out as he fought his way up to fourth early on. Racing just outside of podium contention, he got caught up in the traffic and ended up going down, salvaging another sixth. With a good jump from the front row in the last moto, he got pushed wide into a rock pile and found himself hung up behind a pack of downed riders. Once again fighting from behind, Haaker climbed through the field to claim yet another sixth-place finish in the final race.
“It was a tough night for me, Haaker said. “I had a crash in the Hot Lap that set me in last gate pick for the first race and I kind of dug myself a hole that I couldn’t really get out of too easily. Definitely a tough pill to swallow, I was feeling pretty good coming into this and I’ve been putting in the work but EnduroCross is its own beast and sometimes it’s just not your day. We’ll live to fight another one, put ourselves in the best position possible and try to get up there and make some stuff happen.”
EX Pro Results – Round 1
1. Taddy Blazusiak (GAS) 1-2-1
2. Trystan Hart (KTM) 2-1-2
3. Blake Gutzeit (KTM) 4-5-5
…
6. Colton Haaker – Rockstar Energy Husqvarna Factory Racing, 6-6-6
About Michael Le Pard 8242 Articles
"Mr. Totalmotorcycle". Owner and Founder of Total Motorcycle. Supporting over Motorcyclists and Motorcycling for 23 great years. Total Motorcycle is my pride and joy and being able to reach out 375 million people has been incredible but I could not have done it without the support of my visitors, readers and members, thank you so much! You are making a difference to millions of riders worldwide. Thank you.
Website Facebook Instagram Twitter YouTube LinkedIn