In recent years the Rally Dakar has found its home in South America. But, as the name suggests, that’s not always been the case. The Rally Dakar was born in 1978, taking competitors from Paris, France over 10,000 km through the deserts of Africa to the finish at the famous Lac Rose near Dakar, Senegal. 182 vehicles set off from the French capital on that inaugural trip, 74 of them completed their journey. The event grew steadily through the 80s and 90s and in 2005 a record 688 competitors entered the rally.

In 2008 the event was due to depart from Lisbon, as it had the previous two years. But a terrorist attack in Mauritania late in 2007, in which five French tourists were attacked, caused massive concerns for the organizers. As such the 2008 event was cancelled, creating doubts for the continuing future of the world’s toughest rally.

All was not lost, obviously, with the countries of Chile and Argentina stepping forward to host the event in 2009. The Dakar name remained but the event has been held in South America ever since. KTM continued their winning streak, despite the change of venue, and as of the 2017 Dakar, their run of consecutive victories stands at 16. 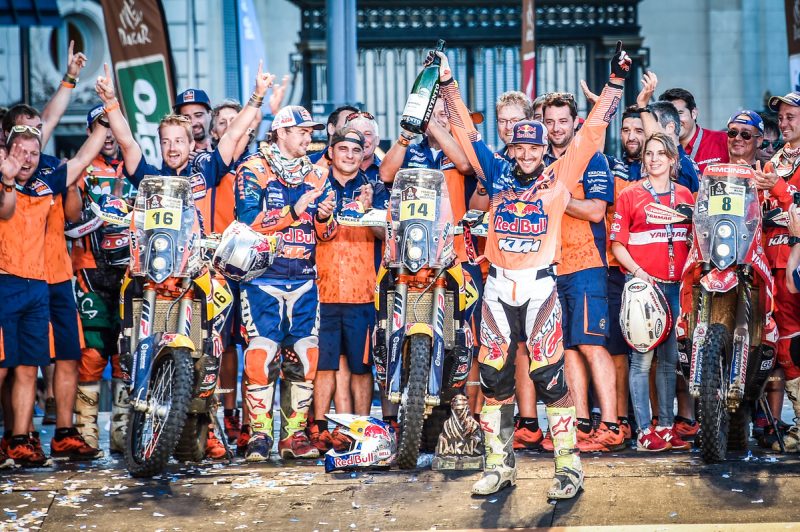 For 2018, the Dakar will cover the three countries of Peru, Bolivia and Argentina. Each country will offer competitors dramatically different terrain – from the sand dunes of Peru, over the mountains of Bolivia to the fast tracks and riverbeds in the heat of Argentina. 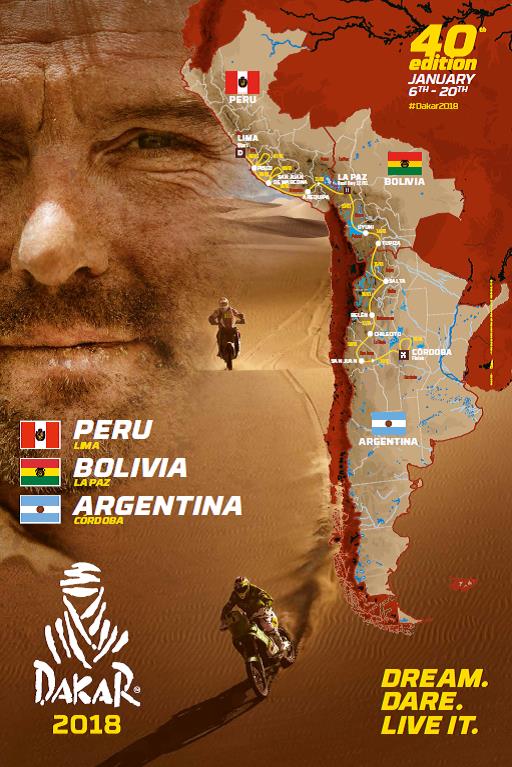 Peru
After being included in the Rally Dakar for the first time in 2012, and then hosting the opening ceremony in 2013, Peru has been absent from the program ever since. The Peruvian government voiced their desire to be part of the rally again at the end of the 2017 event and after working closely with the organizers, ASO, they have made it happen.

Peru will host the opening six stages, which throw competitors straight into the sand dunes of the Peruvian desert. It will be tough from the outset for the riders as the bikes are often first onto each stage. The difficulties of navigating the deep sand and tall dunes will only add to their fatigue.

“I think a lot of the riders have missed the sand over the last couple of years, but after a week in Peru everyone will be sick of it again,” jokes Laia Sanz.

Stage five, which travels from San Juan de Marcona to Arequipa, will really test the competitors’ stamina and navigation skills. The total stage distance is a grueling 770 km, 264 km of which is timed special stage. The bikes and quads will take a separate route to the cars and trucks. Starting at daybreak, the stage takes in 30 km of huge, mountainous dunes. Accurate navigation and the ability to read the terrain will be vital to not only getting a good result, but safely reaching the finish.

On Thursday, January 11, stage six has competitors leave Arequipa in Peru and head to the world’s highest capital city of La Paz in Bolivia. The stage is another long one, covering a total of 758 km and will leave the desert before climbing to an altitude of 2,500 m at the Bolivian Altiplano. 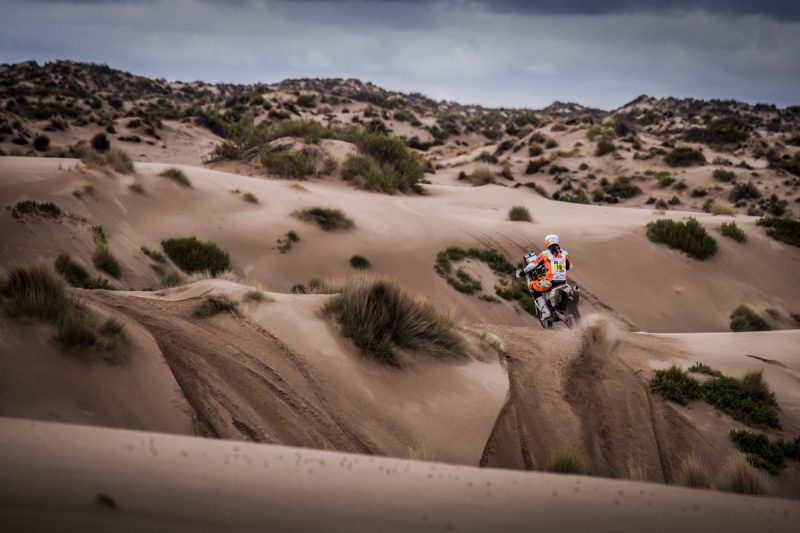 Bolivia
The biggest challenge of racing in Bolivia is the altitude. The rest day on Friday, January 12, is held in the capital, La Paz, sitting at a staggering 3,640 m above sea level. Even after having a day off to rest and acclimatize to the conditions, travelling through Bolivia is going to be tough.

Part of the challenge is overcoming the extra fatigue that is caused by racing at such high altitudes – the level of oxygen is less than that at a lower level. It’s because of this that riders like to train at altitude on the run up to the Dakar, many choosing to ski and exercise in the mountains of Europe before the final trip to South America in January.

“Winter training is important because every rider needs to work on slightly different things. I like to get as much time on the bike as I can but often look at different techniques during the winter such as hiking at altitude, which is really good for fitness,” comments Matthias Walkner.

Stage seven of the rally leaves La Paz and heads for the city of Uyuni. The first of the all-Bolivian stages will offer a new backdrop for the teams and is the first half of the initial marathon stage. Again, good navigation will be required but also vigilance on the difficult tracks leading to Uyuni. After a total of 726 km in the saddle, riders will reach the camp where they will stay for the night. All bike maintenance must be carried out by themselves – no team assistance is allowed.

The second part of the marathon stage includes the longest special stage of the rally. A timed 498 km route faces the riders, which covers sand dunes at over 3,500 m above sea level. This stage will really set apart the strongest from the rest of the field before going into the final six days’ racing.

If things weren’t tough enough already, one of the additional challenges of Bolivia is the weather. At such high altitudes changes in conditions can be dramatic and happen extremely quickly, adding to the difficulty faced by the now exhausted competitors.

“When you add in factors like heat, cold, terrain and altitude it all becomes way harder. That is the toughest thing, the accumulation of days like that, it has a snowball effect and the stress builds on your body and mind,” explains Sam Sunderland. 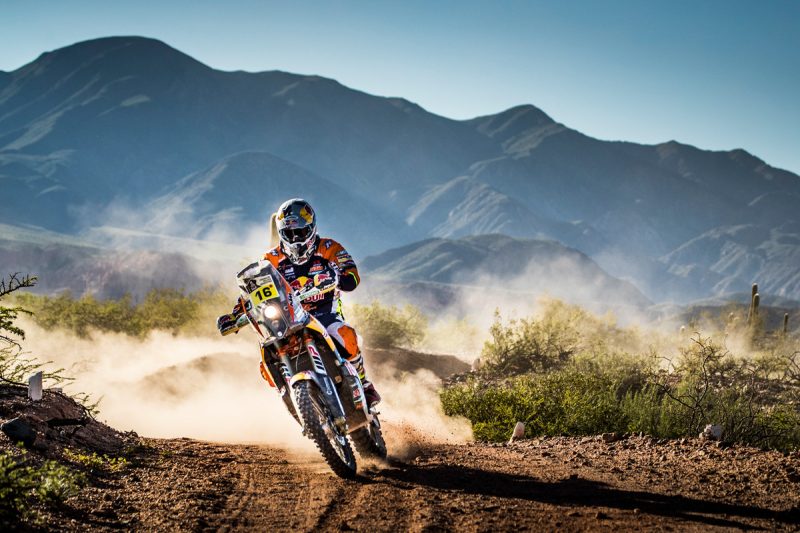 Argentina
The fast tracks and rivers of Argentina have become legendary since the Dakar crossed continents to South America. The treacherous terrain combined with unforgiving heat not only makes it tough for the competitors but also increases the chances of making a mistake. By this point in the rally, riders will have covered close to 5,000 km – their bodies will be tired, and so will their minds. One of the key factors in completing a successful Dakar is minimizing mistakes during the event. Faced with difficult terrain and tough navigation, those mistakes will become all too easy to make for even the most experienced of Dakar regulars.

The bikes and quads will enjoy a second marathon stage in Argentina. Again, no assistance is allowed when the riders camp out after the 484 km, stage 11. Part of the skill when riding these marathon stages is not only conserving your energy but also conserving the bike.

“… you have to ride a little more carefully so you don’t crash and damage the bike, because if you break something it could be the end of your race,” adds Laia Sanz.

After returning from their second marathon stage, the competitors will only have the final two days left to ride. However, January’s stage 13 on Friday 19 will be one of the toughest of the event. Now completely exhausted, the riders will face a 904 km stage that includes 423 km of timed special. Covering the sand dunes of San Juan, the terrain will be incredibly energy sapping especially after nearly two weeks of riding. The leaders will be trying to make up good time here while still riding sensibly – a retirement this close to the finish would be soul-destroying.

The final stage on the outskirts of Cordoba although short at 284 km will still be difficult with riders having to cross around 30 rivers on the way to the chequered flag. Competitors will have to stay focused right to the end in order to successfully complete the rally.

“The Dakar is like no other race, so to get to the finish in itself is a massive achievement. This year I plan to do exactly what I did last year, stay consistent, fast and take each day as it comes. Hopefully it will reward myself and the team with another win,” offers 2017 Dakar winner Sam Sunderland. 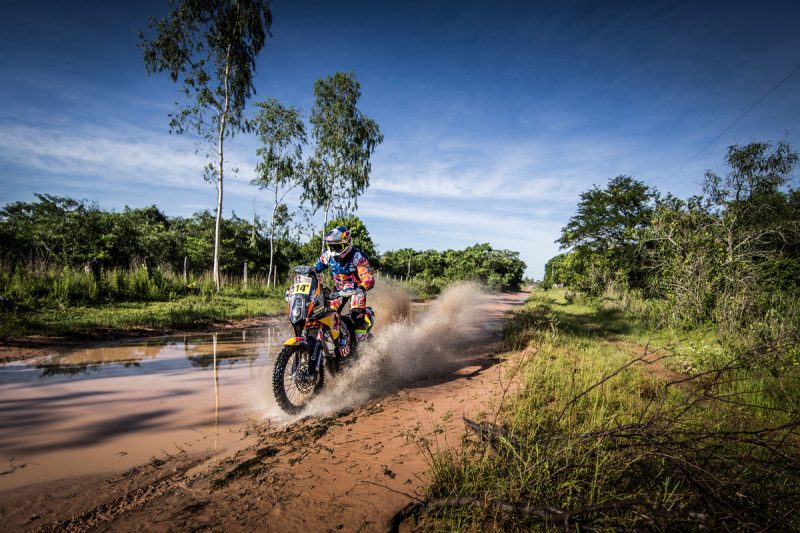 Thanks to Photos from Marcin Kin and Rally Zone | www.dakar.com

In what was yet another challenging day of racing at this year’s Dakar Rally, Rockstar Energy Husqvarna Factory Racing team riders Andrew Short and Pablo Quintanilla enjoyed strong performances during Monday’s stage seven of the […]

Rockstar Energy Husqvarna Factory Racing’s Pablo Quintanilla has claimed second overall at the 42nd edition of the Dakar Rally in Saudi Arabia. Earning his best result at the event by putting in an excellent performance […]