The Red Bull Honda World Superbike Team wraps up the 2017 FIM Superbike World Championship with a solid performance by Jake Gagne, who was twelfth again at the end of the 17-lap, final encounter of the season at the Losail International Circuit. Gagne’s team mate Davide Giugliano was declared unfit to race following an outbreak of gastroenteritis.

Gagne got a good launch from 17th place on the grid and – after a few laps – he got up to speed on board his Honda CBR1000RR Fireblade SP2 machine and made his way into the top-15. In the first half of the race, the 24-year-old American lapped consistently in the 1’59secs – a pace which helped him consolidate twelfth position as the laps went by. Gagne then rode a lonely second part of the final encounter to equal yesterday’s race one result, albeit with a smaller gap to the top.

The Red Bull Honda World Superbike Team will begin preparations for the 2018 FIM Superbike World Championship with a private test on November 22-24 at ‘Circuito de Jerez’ in Spain. 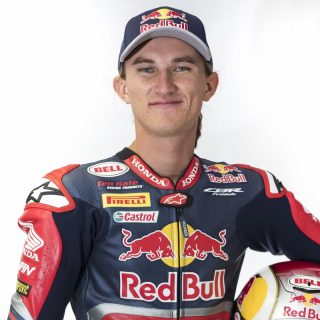 I was happy with the progress made today in warm up because we improved the feeling with the front-end of the bike and the rear grip got better, too. My start to the race was pretty good, but unfortunately I found myself on the outside at turn two and that cost me a couple of places. Because of that, I ended up losing a couple of seconds from the group ahead. It was kind of a bummer, because I think we could have stayed with them and battled for a better finish. But nevertheless I’m happy because we made a lot of progress throughout the weekend and I learned a lot, so thanks to the team and Honda for inviting me back for one more race this year.

It’s a real shame that I was unable to take part into this final race of the season, but unfortunately the gastroenteritis has been debilitating me for a few days now, and today I was in no condition to compete. I want to thank Honda and the team for this great opportunity to get back to the World Superbike paddock this year, it has been a pleasure to work with such a great squad. The boys have done an incredible job and Ronald has put together a great group of people. It has been a tough year for all of them no doubt, but I’m sure things will turn around for the better soon and I think we have done a good job with the bike in these few rounds together, which will hopefully set things into a good direction for the future.

Today it became evident as we got closer to the race that Davide’s physical condition was getting worse and worse, so it was a wise decision by the Medical Director to declare him unfit to compete. We want to thank him for stepping in this year as well as for his contribution and feedback to the development of the Fireblade. Jake managed to equal his best WorldSBK result today to wrap up what was a very positive round for him: he improved session after session and he could have aimed for a top-10 finish had he not lost touch with the group ahead in the early stages. Let’s not forget this was only his third-ever World Superbike round and the first under floodlights – on a track he had never ridden before. So hats off to him for today’s performance and a thank you for racing with us. All in all, it has been a very difficult season from many angles but we will come back stronger and hopefully this year will serve us well for a better 2018.

Cleary & Dry / 29
Saturday 4 Nov 2017, 18:51 UTC
About Michael Le Pard 5305 Articles
"Mr. Totalmotorcycle". Owner and Founder of Total Motorcycle. Supporting over Motorcyclists and Motorcycling for 21 great years. Total Motorcycle is my pride and joy and being able to reach out 330 million people has been incredible but I could not have done it without the support of my visitors, readers and members, thank you so much! You are making a difference to millions of riders worldwide. Thank you.
Website Facebook Instagram Twitter YouTube LinkedIn

Pata Yamaha with Rizla WorldSBK riders, Alex Lowes and Michael van der Mark, both have their sights set firmly on third place in the 2019 FIM Superbike World Championship standings, as they head to the […]

Yamaha Riders Primed for Penultimate Round in Assen

September 13, 2018 Michael Le Pard News Comments Off on Yamaha Riders Primed for Penultimate Round in Assen

Entering the penultimate round, Monster Energy Yamaha Factory MXGP’s Jeremy Van Horebeek and Wilvo Yamaha Official MXGP’s duo of Jeremy Seewer and Shaun Simpson are set for a strong end to the twenty round MXGP […]