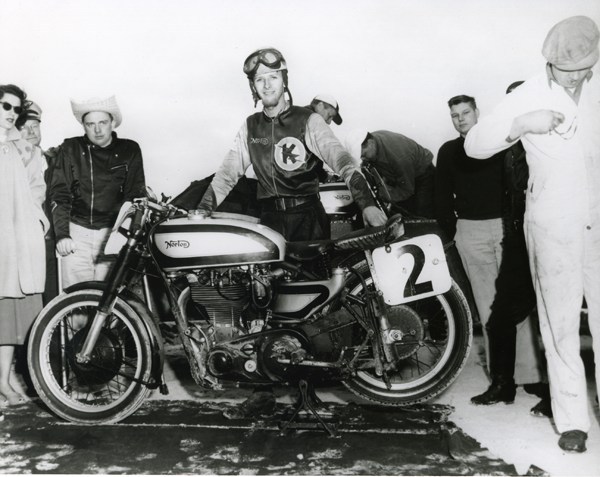 Born in Columbus, Ohio in 1928, Klamfoth began riding motorcycles at the age of 14. He won the DAYTONA 200 on a Norton in his first outing in 1949, following that up with additional victories on the beach course in 1951 and 1952.

From 1954 to 1961, Klamfoth made his mark on the Grand National Championship, finishing in the top 10 each year and scoring five national Half-Mile wins on his BSA. After retiring from racing, he was inducted into the AMA Hall of Fame in 1998 and the Motorsports Hall of Fame of America in 2017.

Klamfoth’s record of three DAYTONA 200 victories held for nearly 50 years but the “King of the Beach” will be synonymous with America’s most historic motorcycle race forever. A perpetual promoter of motorcycle racing, Klamfoth and his wife Bev led the charge to create the Daytona 200 Monument in 2002. Located on the beach near Main Street in Daytona Beach, the monument is dedicated to preserving the history of the legendary beach race that birthed Daytona Bike Week.

Klamfoth’s funeral will be held on Saturday, December 21. In lieu of flowers, donations can be made to the Daytona 200 Monument at https://www.daytona200monument.com.

Professional track cyclist, Jason Kenny, swapped pedal-power for horse-power this week as he obtained his ACU race licence, enabling him to enter a Kawasaki Team Green Cup race on August 4-5 at Oulton Park as […]