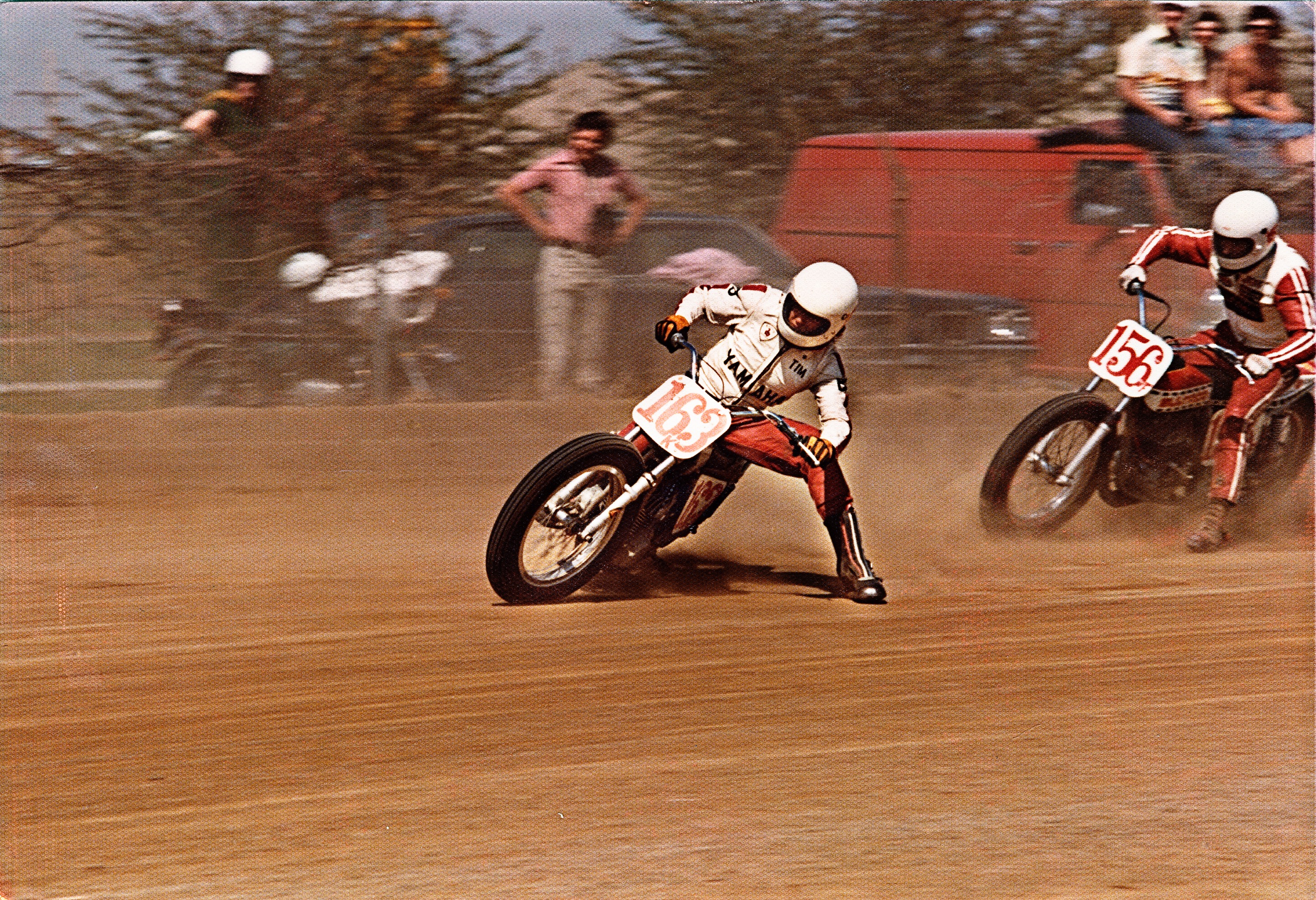 Tim Estenson, the driving force behind the impressive Estenson Racing team in the American Flat Track series, is clearly a man on a mission.

From humble beginnings competing out of a small van with a single rider in 2016, Estenson – who built, ran and later sold his successful trucking firm – has methodically built a race team that in both design and deed has forged itself into a major player in the AFT ranks. It’s also one that in 2019 could’ve easily been – with its massive tents, trailer and brilliant blue-and-white livery – mistaken for a factory Yamaha AMA or World Superbike spread from the glory days of the ’90s or early 2000s.

Step one in Tim Estenson’s flat track trek was an impressive AFT Singles championship in 2017 with Kolby Carlile. Step two was the team’s four victories in 2018, one with Jake Johnson in AFT Twins and three with Carlile in AFT Singles. It got better in 2019 with the milestone victories in the AFT Twins division with roadracer/dirtracker JD Beach winning the inaugural Arizona Super TT and the Buffalo Chip TT (the first twins wins for Yamaha in nearly 40 years); in the AFT Singles division with rookie sensation Dallas Daniels winning the legendary Peoria TT and Ryan Wells winning at Perris, CA; and in Production Twins with Carlile winning at Springfield and in Minnesota, finishing a close third in the championship and having a shot at the title in the season finale.

The next step in Estenson’s impressive journey is the team’s new-for-2020 AFT SuperTwins effort, headlined by the recently announced duo of veteran Beach and up-and-coming twins pilot Carlile on the team’s expertly-tuned for 2020 MT-07 DT race bikes.

As a successful businessman, Estenson’s take on the subject of SuperTwins is, as you’d expect, highly business-oriented.

“I’m not exactly sure everyone out there is getting the whole SuperTwins thing,” says Estenson, “and there’s some partial and misinformation out there among teams and fans. But I believe an exclusive, top-tier class and everything that comes with it is what the sport needs at this point in the game, and I’m behind it 100% for that reason. 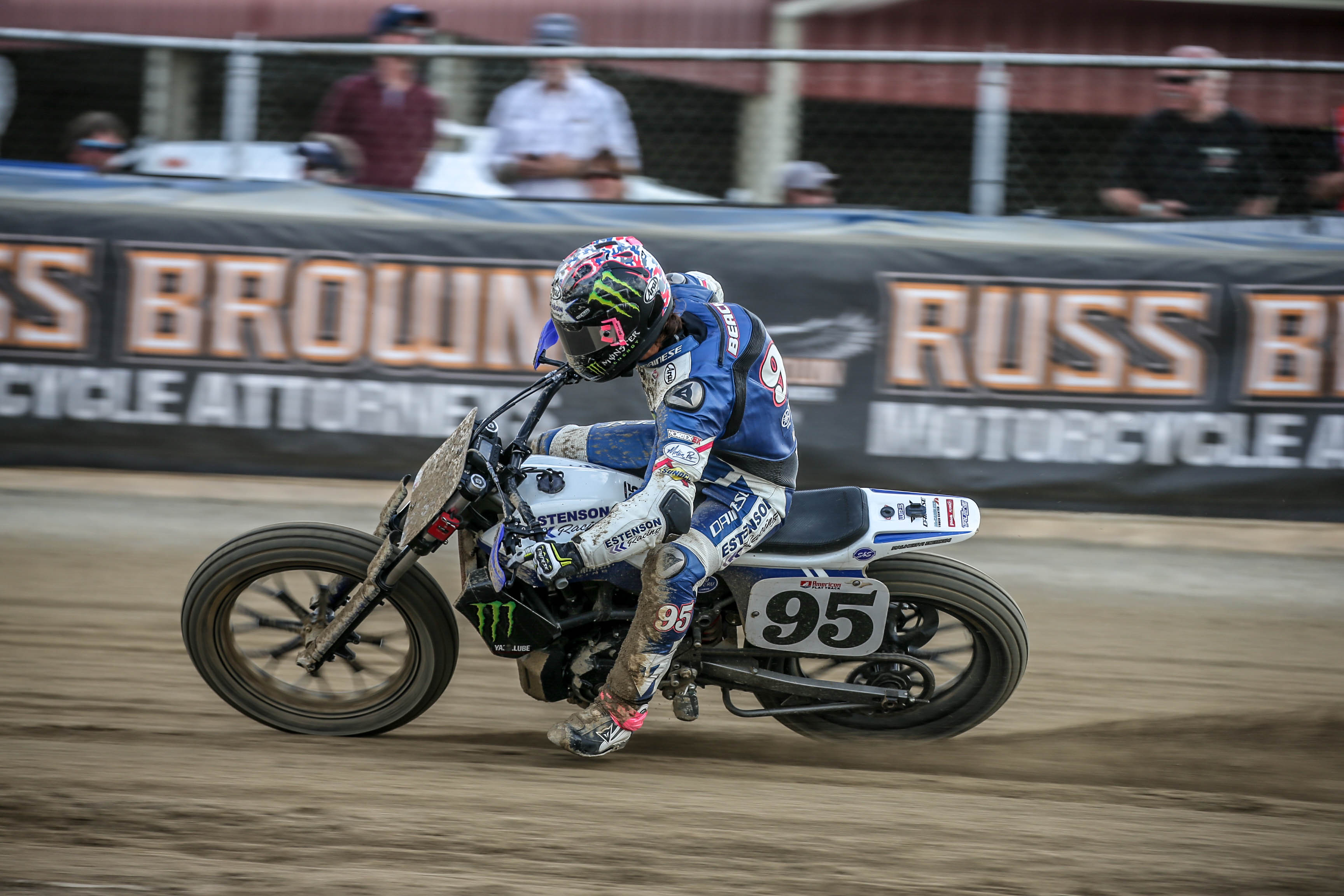 JD Beach, one of the most talented racers on earth, will ride twin-cylinder Yamahas for Estenson Racing again in 2020. He’ll team with Kolby Carlile in AFT’s new SuperTwins division. Scott Hunter.

“Look, motorcycle dirt track racing, even at the professional level, has traditionally been, for lack of a better term, a bit of a ‘good ol’ boy’ sport. It has a family and community vibe, with folks helping one another, mostly small and local sponsors, and of course great racing and lots of fun. I grew up in the sport in the 1970s and experienced a lot of this firsthand. We need to maintain a lot of that flavor; it’s one of the things that makes dirt track racing so special.

“But some things need to change if the sport is to grow and become financially viable, for riders and teams, for sponsors and for the series itself. And I believe that, due to the changes AFT has made over the last few years, the competitive racing environment in general, the partnership with NBCSN and the excitement that’s been generated in our sport in recent years, that the time is now. It’s all quite exciting. You’ve got considerably more OEMs interested, the audience is growing, sponsors are starting to realize the exposure potential, our riders are becoming more well-known nationally and internationally, there’s a lot of R&D going on behind the scenes, etc. It all feels like it’s time to break out, time to shine, and time to create sustainable revenue for all involved. I believe in this, and I think we’re ready for it.

Tim Estenson (163) is no stranger to dirt track racing, having grown up working in a family-owned Yamaha dealership and racing during his younger years. Estenson Archive.

“In my mind, AFT has to do this to keep the sport’s forward momentum moving. Once sponsors see the exposure potential via the promotions, TV and media coverage AFT is planning for the SuperTwins division, I believe things will change.”

In many ways, Estenson Racing has been competing at this higher-tier SuperTwins-esque level for a couple of years. The team’s paddock footprint, transporters, livery, machinery, crew and public relations efforts are truly factory-level.

“It’s not unlike a business venture,” Estenson says. “You do things as professionally and as well as you can, represent your product and your people at a high level, and just do things right. I could see the potential in all this early on, back in about 2017, after talking to Michael Lock, hearing the plans he had, seeing the exciting racing on the track and the vibe in the paddock and feeling that electric excitement from the fans. I had a vision of what I wanted to do: build a great team, be competitive and give back to the fans. I also wanted to represent Yamaha in a highly favorable way while winning races and, hopefully, championships. I kept thinking, ‘Just build it and they will come.’ We did and they are starting to.”

Yamaha is certainly happy with its affiliation with Estenson Racing.

“We’re excited to expand our partnership with Estenson Racing for 2020,” says Yamaha Racing boss Keith McCarty. “Tim Estenson really stepped things up last year, assembling a great group of riders and accomplishing some milestones for his team and for Yamaha. With a great rider lineup in 2020, and with a great crew and top-level equipment, I’m sure good things will happen for the Estenson Racing Yamaha team.” 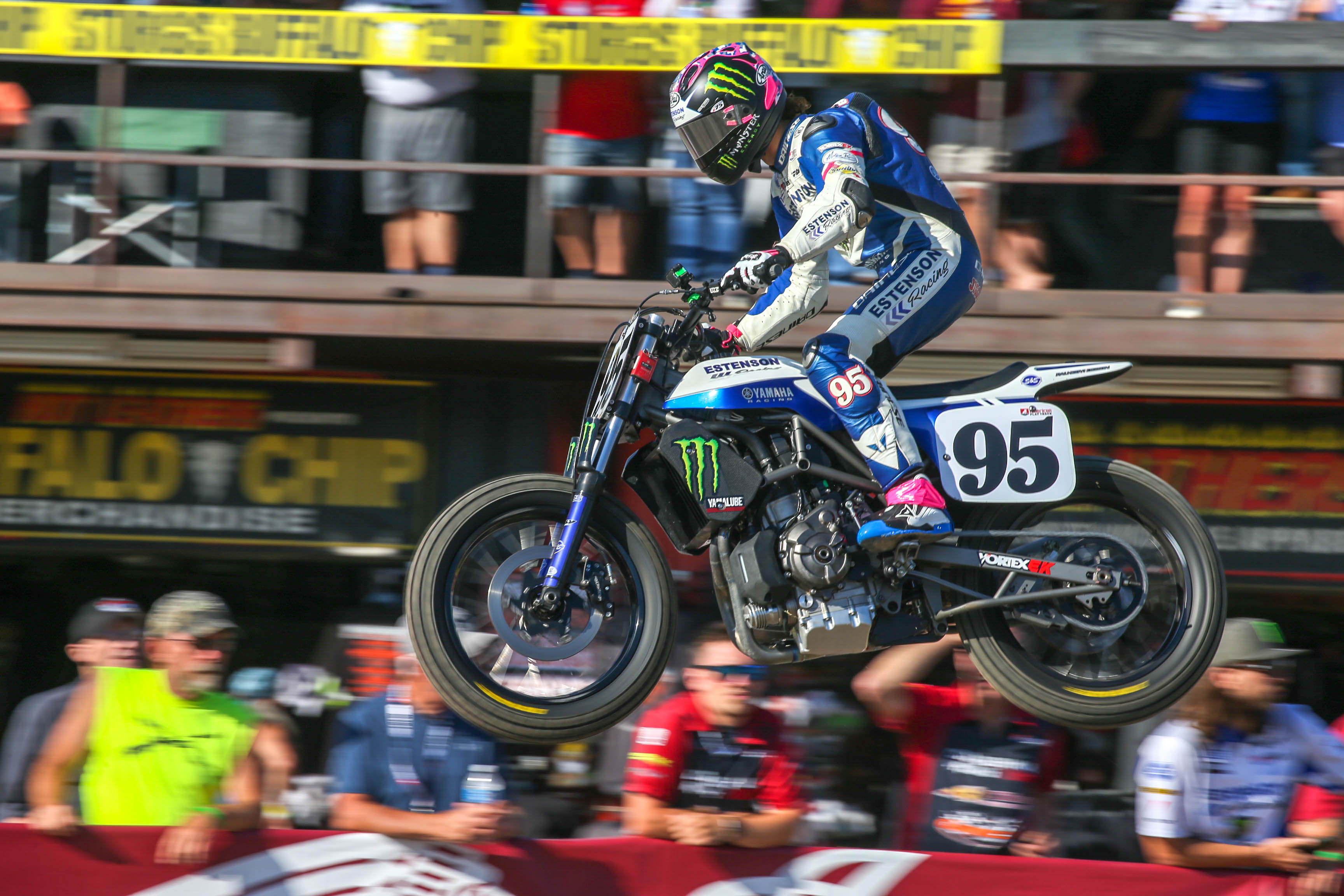 “It’s great to have JD [Beach] back full-time on the twin for 2020,” Estenson says. “He’s an absolutely top-level rider on dirt and asphalt, and he could have gone anywhere he wanted to this year, to any team out there. But he’s loyal and fits in so well with our crew, and we’re just overjoyed to have him back for the entire season. He’s a true professional, and his commitment to the sport, to training and to our team is unmatched. We have such respect for JD, and we’re happy to say he’s signed up again. He’s a bigger-than-life personality, too, and that’ll resonate with fans at the track and those watching online and on NBCSN.

“Kolby did so well on the twins last year,” Estenson adds, “and we’re excited for him and his growth in 2020 in SuperTwins. He started out so strong last year, riding against the big guys in the premier class, but had some mechanicals and, later on, he broke his kneecap. It was a lot worse than most folks knew, but he hung in there and didn’t complain, and came back strong with some great finishes at the end of the year. He probably should have rested it longer, but he’s a competitor, and it was hard to keep him down for long. He’ll continue to grow as a rider and a person. He’s super healthy now and has been riding and testing a lot. He was bummed, as we were, to not win the Production Twins title in 2019 [Carlile finished third overall, just 17 points behind champ Cory Texter, and had a chance at the title before breaking in the season-finale Main event. Ed.]. It was a hard pill to swallow, but he has the right mindset, and he’s close with JD, who’s a mentor to Kolby, so he’s bound to be better than ever this season.” 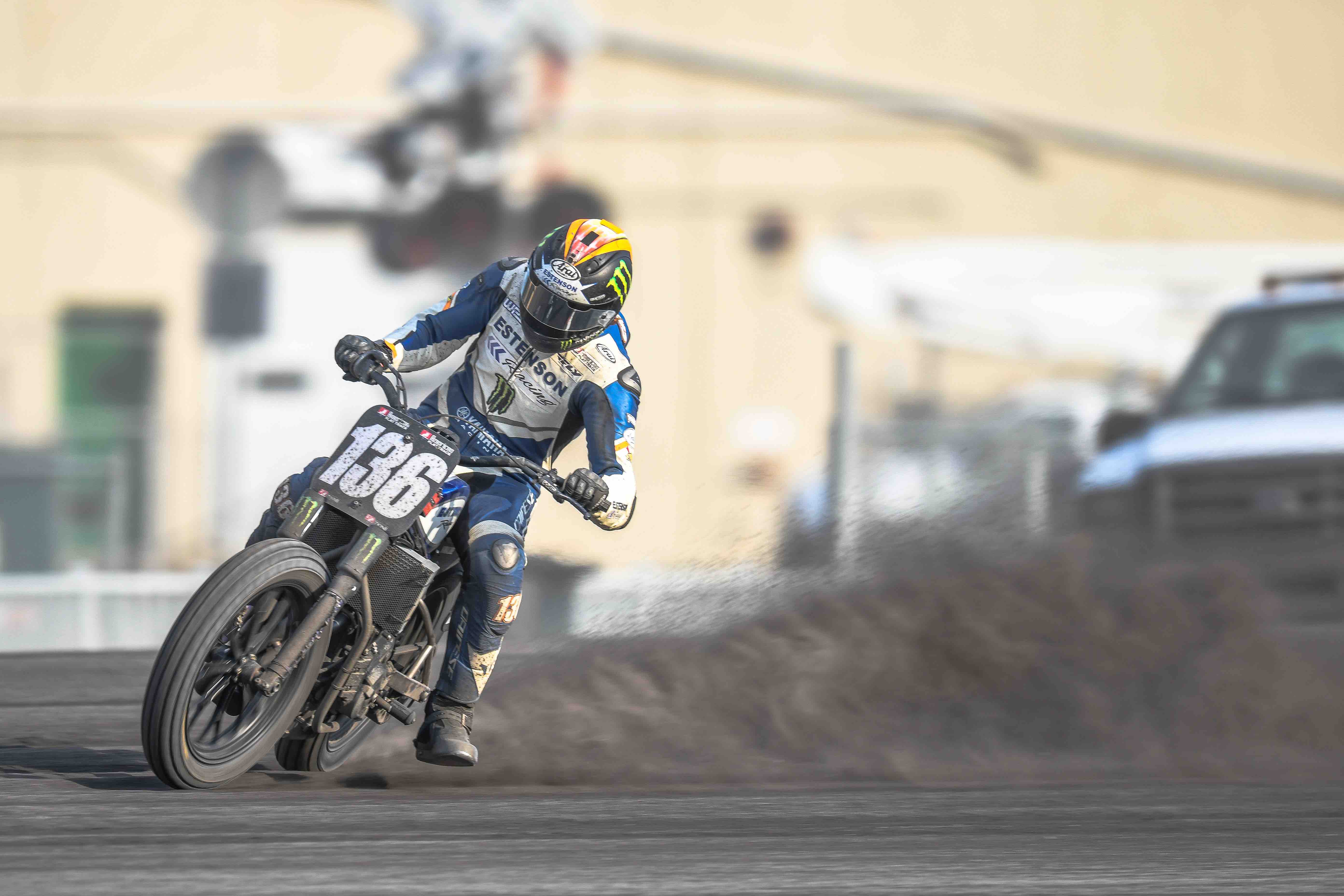 Despite some mechanical DNFs and a broken kneecap, Kolby Carlile rode brilliantly during 2019, finishing third overall in AFT Production Twins and keeping eventual Production Twins champion Cory Texter honest right through the final Main of the season at the Meadowlands. Scott Cavalari.

Estenson has a solid history with Yamaha, too, all of which strengthens his current relationship with the tuning-fork company. “I grew up kicking around our family’s Yamaha shop back in North Dakota and racing on the weekends,” he says. “So I guess I have plenty of yellow and black – and blue and white – flowing in my veins. It’s funny, but I never would have dreamed I’d have Yamaha Motor Company supporting me. Even when I first started this back in 2016. I simply tried to do things the right way, and hoped they’d notice and maybe help out. At first, no one there was interested, but then we started doing well, and I met Keith McCarty, and little by little I think they were impressed, and it just grew from there. Keith has a passion for flat track, and he’s got so much experience on the motocross and Supercross and road racing side of things. What we were doing, and the dirt track design project he and Derek Brooks built a few years ago…it all sort of came together, and here we are. It’s such a great company with such amazing racing history… we keep all that in mind with everything we do. It’s an honor to represent Yamaha, for sure.” 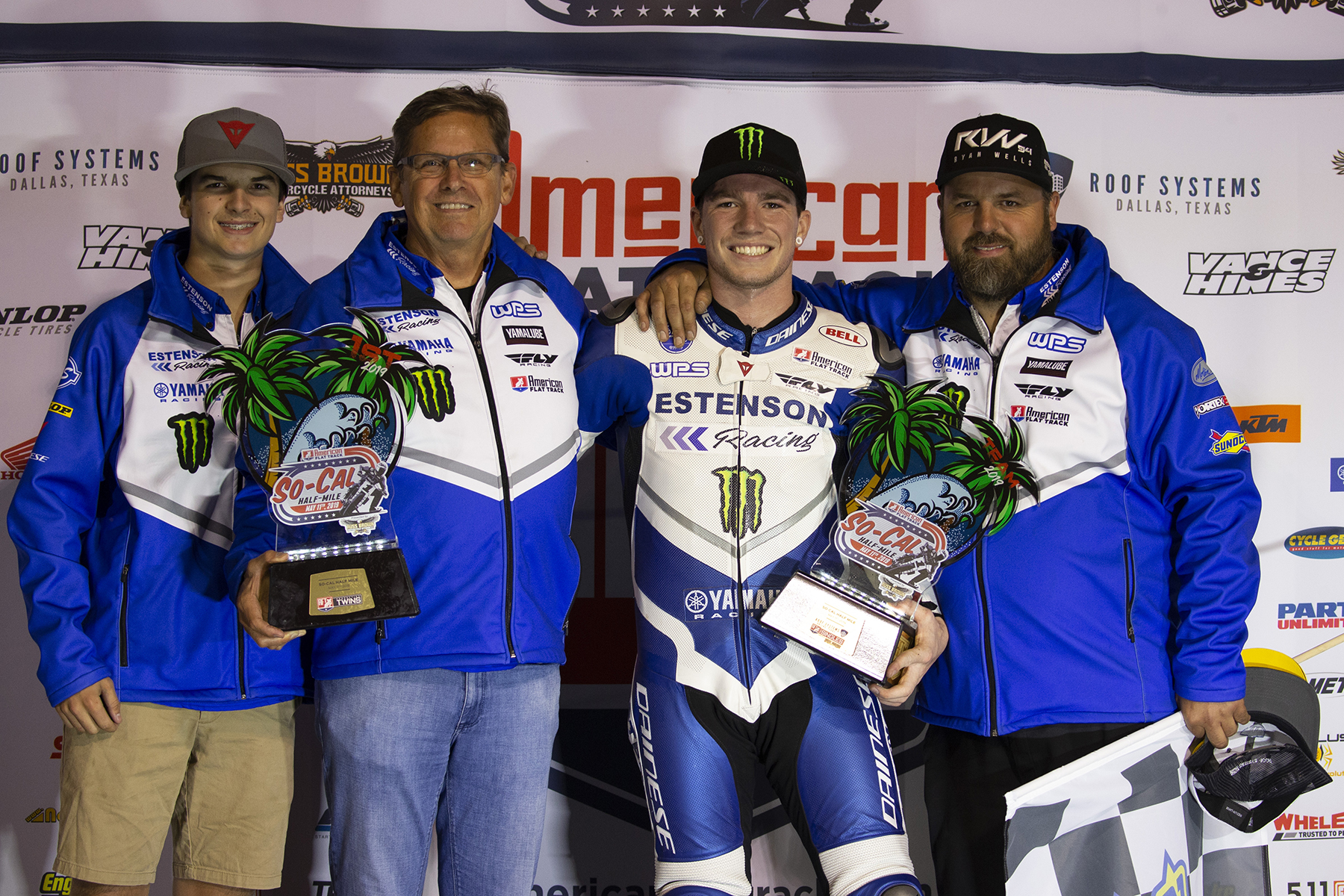 The team’s been working hard in the off-season, as most do, but it goes farther than that. “We actually started before the 2019 season ended,” Estenson says. “We have a big challenge in front of us, obviously. The Indian is so good, and the Harleys were better last year and are bound to improve with Ricky Howerton involved, so we need to keep up and improve as well. I talk to Howerton a lot; in 2019, we were in much of the same boat, with parallel-twin engines competing against the V-twins. We went in different directions, and they saw improved performances at the end of the season. I’m happy he and Bryan landed [at Harley-Davidson]. It’ll be interesting, for sure!

“I’m really excited about Daytona,” Estenson says. “I’m hearing there’ll be a bit more asphalt this year, which will be a good thing for us. I’m looking forward to the Springfield doubleheader, too. And the Buffalo Chip… we’ve had good success there, and the environment … wow! It’s just amazing. The action, the racing, the electric vibe and the great fans. Good stuff for sure.”

And that about sums up Estenson’s plan for 2020, and specifically his SuperTwins efforts with JD Beach and Kolby Carlile in the saddles of the team’s MT-07 DT race bikes: The action. The racing. The vibe. And the fans.

You really can’t beat that mix. 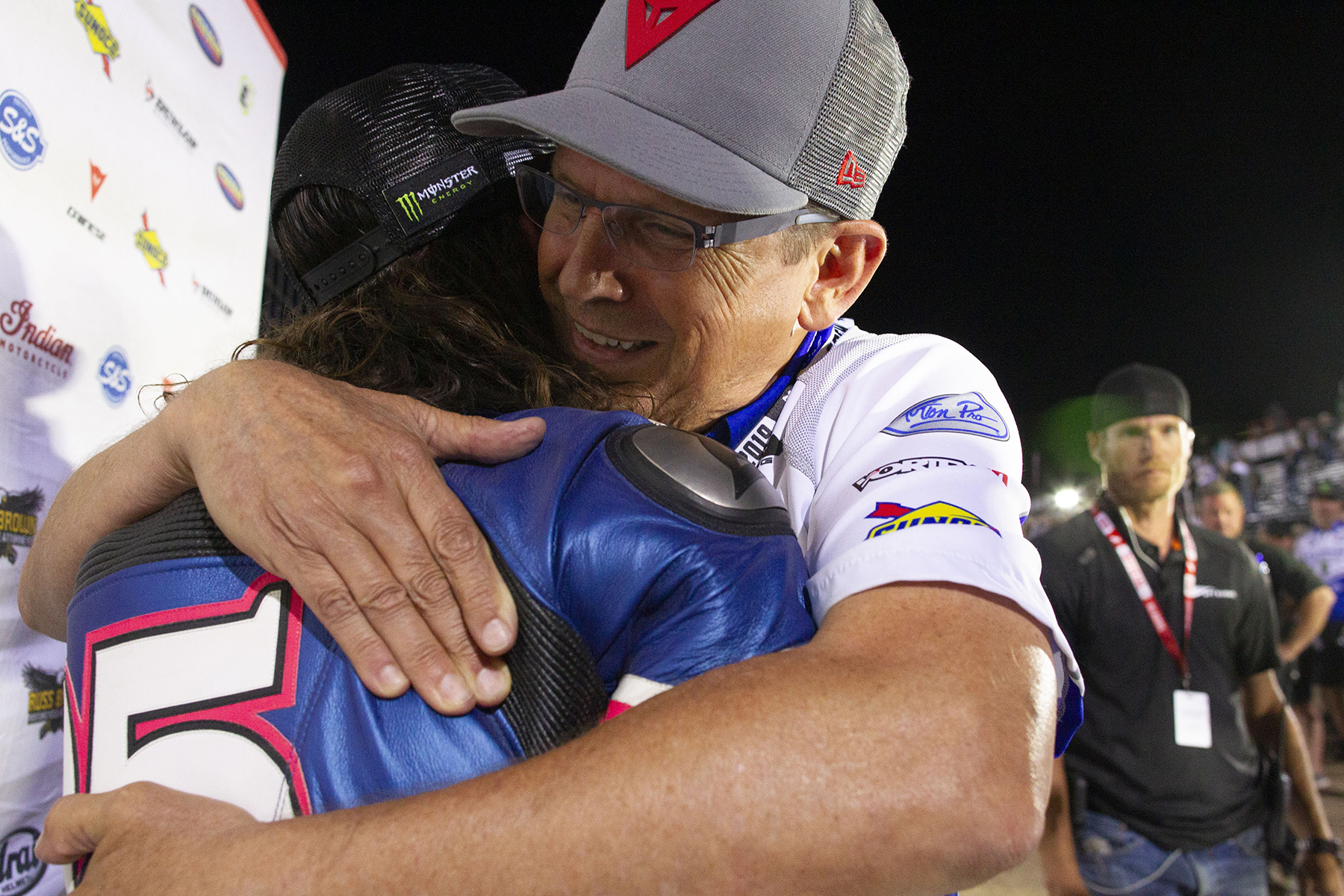 Estenson, congratulating JD Beach after his dramatic win at the Arizona Super TT in early 2019, feels there’s more of this to come during the 2020 AFT SuperTwins season. Andrea Wilson.

The GRT Yamaha Official WorldSSP Team got off to an almost perfect start on Friday at Magny-Cours, round ten of the 2017 FIM Supersport World Championship. Title contender Lucas Mahias dominated proceedings at his home […]

Spanish rider Álvaro Bautista powered to his twelfth win of the season at the Jerez de la Frontera circuit with a dominating performance in Race 1 of the Spanish World Superbike Round held today. Starting […]