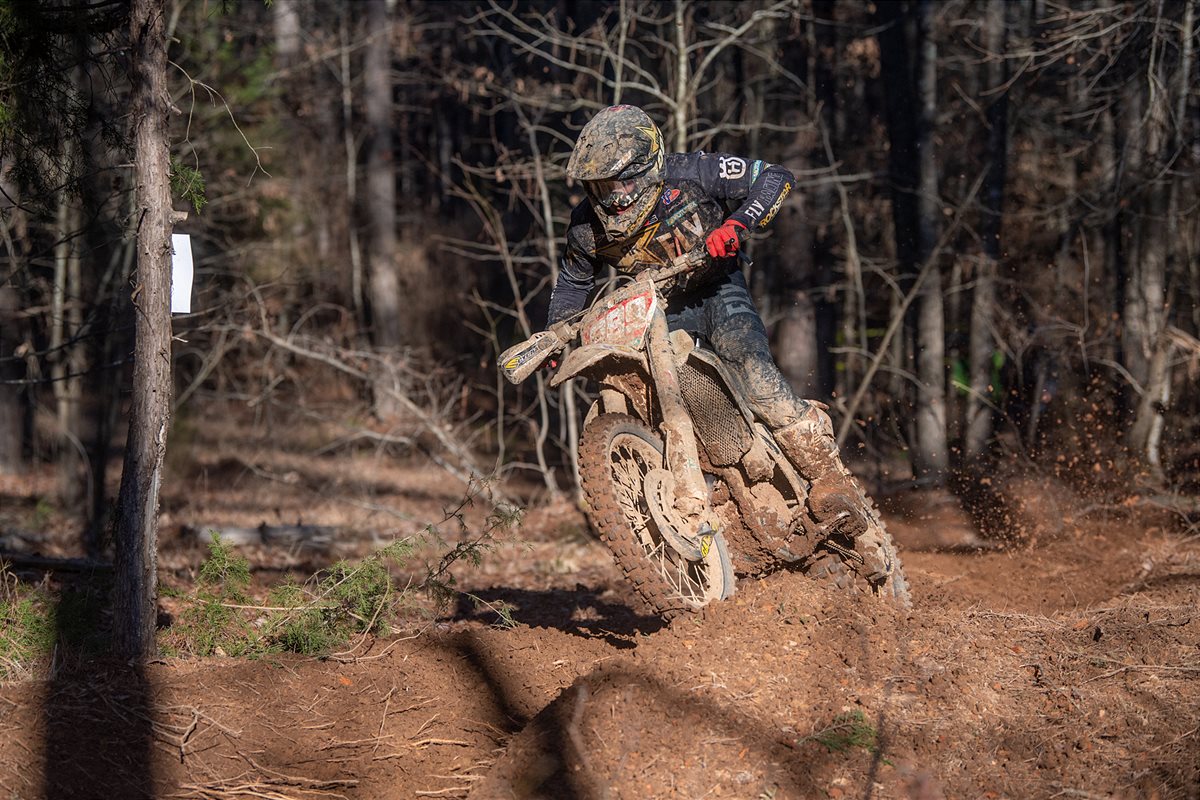 The Rockstar Energy Husqvarna Factory Racing Team got off to a strong start in the 2021 Grand National Cross Country (GNCC) Series on Sunday as teammates Thad DuVall and Craig DeLong each secured runner-up finishes in their respective classes at the Big Buck GNCC opener in Union, South Carolina.
With unseasonably cold temperatures and rain leading up to the race weekend, Sunday’s Big Buck course delivered optimal race conditions for the season opener. As the green flag waived for the start of the XC1 Open Pro race, DuVall found himself down in the first turn but he quickly charged into a top-five position by the end of lap one. He worked his way up to the lead group during the second lap and he made his move into the lead before the halfway point. With an 11-mile course and a large turnout of riders at Round 1, the leaders hit lapped traffic pretty early in the three-hour race and that’s when DuVall settled into the second-place spot. He upheld a strong pace through the second half of the race but keeping his sights on the bigger championship picture, DuVall reeled it in for a comfortable second-place finish at the opening round.
“I felt like I rode really good all day,” DuVall said. “I just put my head down and came from behind to get into the lead and once I did, we got into the lappers and I kind of got stuck. I knew Grant was coming so I just tried to ride my own race and he got around me. He was riding a little out of my comfort zone and I knew with it being the first race I didn’t want to be laying on the ground. I’m happy with second, I rode the best I could and I felt like I was strong all day.”
In the XC2 250 Pro class, defending champion Craig DeLong put forth a great comeback charge after running into the back of another rider and going down off the start. Beginning his race in dead last, DeLong was able to make quick work of the field by lap two as he climbed into second before taking over the lead later in the lap. It wasn’t long before he was joined by a hard-charging group of riders up front and he ended up getting shuffled back to third around the midway point. He put on another charge with two laps to go, reclaiming the second-place spot and carrying it through the checkers for a solid start to his title defense.
“I’m happy with a second-place finish considering how I started,” DeLong said. “I went in a little too hot in the first turn and ran into the back of someone’s bike and down I went. I kind of played catch up the first two laps and then I made a big charge to get into the lead halfway through the second lap but they went back by me pretty quick and I settled into third for a while. I kind of struggled halfway through the race but I was able to capitalize on Johnny there at the end. All-in-all, second place, I’m happy.”
Next Round: Palatka, Florida – March 7, 2021
Big Buck GNCC Results
XC1 Open Pro Class
1. Grant Baylor (GAS)
2. Thad DuVall – Rockstar Energy Husqvarna Factory Racing Team
3. Josh Strang (KAW)
XC2 250 Pro Class
1. Mike Witkowski (YAM)
2. Craig DeLong – Rockstar Energy Husqvarna Factory Racing Team
3. Lyndon Snodgrass (KAW)
4. Evan Smith (HQV)
Overall Championship Standings
1. Grant Baylor – 30 points
2. Thad DuVall – Rockstar Energy Husqvarna Factory Racing Team – 25 points
3. Josh Strang – 21 points
XC2 250 Pro Class Championship Standings
1. Mike Witkowski – 30 points
2. Craig DeLong – Rockstar Energy Factory Racing Team – 25 points

BMW Says This Business Model is Still Future-Proof After Crisis

May 6, 2020 Michael Le Pard News Comments Off on BMW Says This Business Model is Still Future-Proof After Crisis

Munich. The BMW Group is well prepared to react swiftly and decisively at all times to new developments during the corona pandemic by systematically identifying potential scenarios. This approach is all the more important given that […]