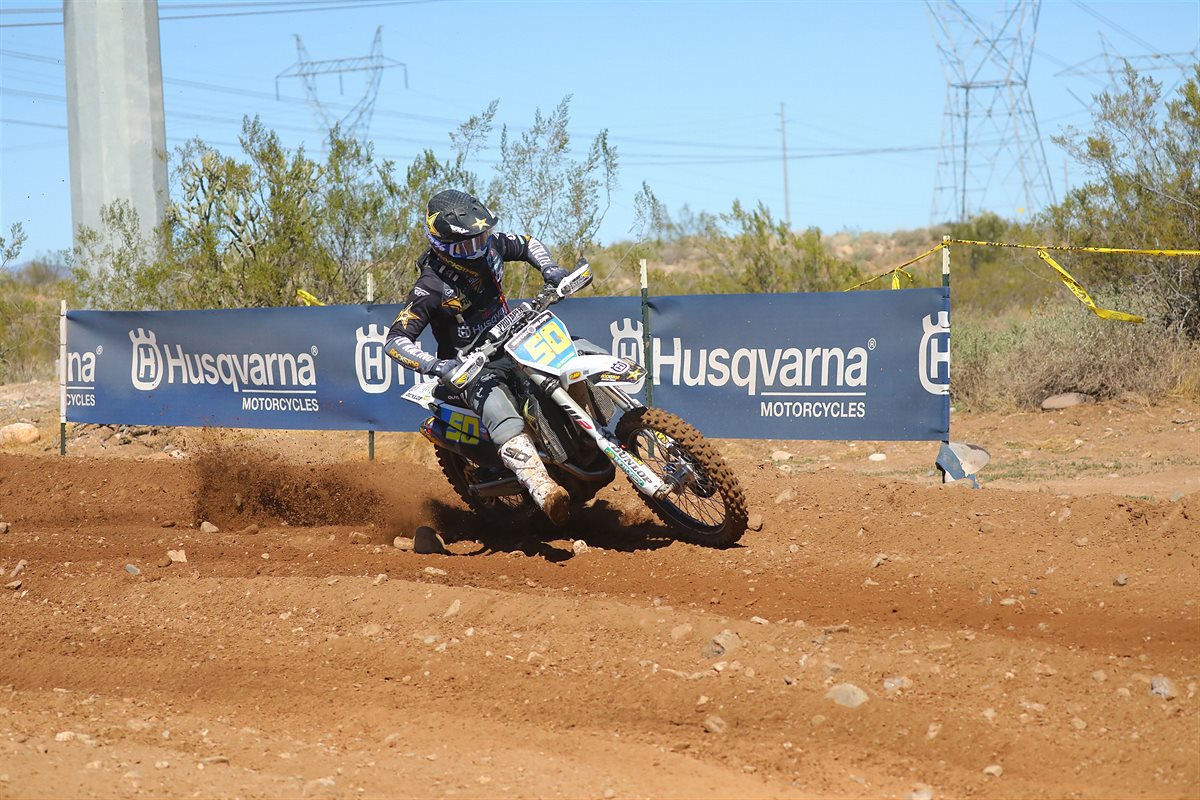 Austin Walton and the Rockstar Energy Husqvarna Factory Racing Team made their way to Peoria, Arizona on Sunday for Round 2 of the 2021 World Off-Road Championship Series (WORCS) at Canyon MX. Walton raced his way to a sixth-place finish in the Pro 450 class after battling through a challenging day of racing.
With a good jump off the start, Walton found himself up front early on as he battled in the second-place position. He made a mistake in the tire section early on and from there he struggled to carry momentum through the technical sections. He held on to fifth for a majority of the race, dropping back to sixth with three laps to go, where he ultimately finished for the day.
Walton: “Today started off really good but I had some struggles out there. I was running second for the first two laps and made one mistake in the tire section and that kind of set the tone for my race. We’ve got some things to work on but all-in-all it was a learning weekend and I know what I can do better for the next one.”
Next Round: Havasu, Arizona – March 26-28, 2021
Pro 450 (MC) Round 2 Results
1. Taylor Robert (KTM)
2. Dante Oliveira (KTM)
3. Zach Bell (KAW)
…
6. Austin Walton – Rockstar Energy Husqvarna Factory Racing
Pro 450 (MC) Championship Standings
1. Taylor Robert – 47 points
2. Dante Oliveira – 47 points
3. Cole Martinez – 33 points
4. Austin Walton – Rockstar Energy Husqvarna Factory Racing – 33 points
About Michael Le Pard 5308 Articles
"Mr. Totalmotorcycle". Owner and Founder of Total Motorcycle. Supporting over Motorcyclists and Motorcycling for 21 great years. Total Motorcycle is my pride and joy and being able to reach out 330 million people has been incredible but I could not have done it without the support of my visitors, readers and members, thank you so much! You are making a difference to millions of riders worldwide. Thank you.
Website Facebook Instagram Twitter YouTube LinkedIn

June 26, 2019 Michael Le Pard News Comments Off on Kenichi Kuroyama Takes to Podium in 2nd with TY-E at First Round of FIM Trial-E Cup

Round 1 of the FIM Trial-E Cup was held from June 22 to 23 in Zelhem in the Netherlands alongside Round 3 of the FIM Trial World Championship. The Yamaha Factory Racing Team’s Kenichi Kuroyama […]