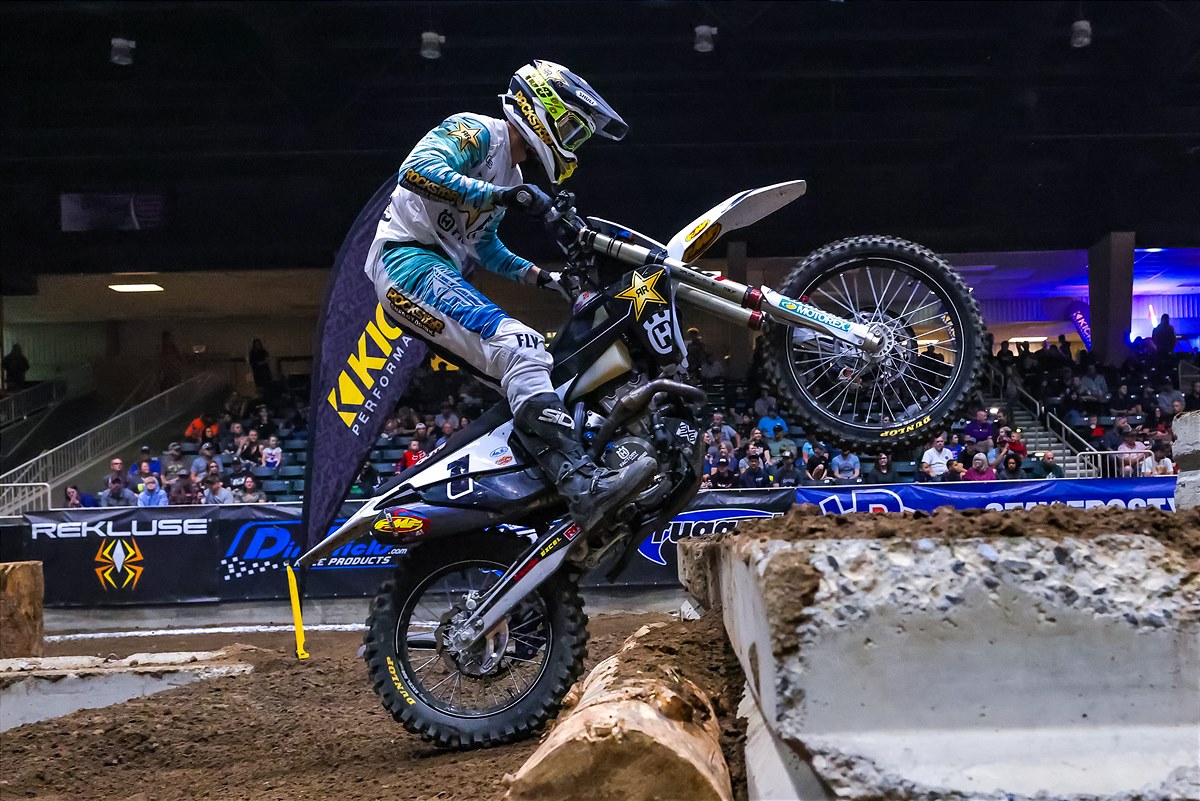 Rockstar Energy Husqvarna Factory Racing’s Colton Haaker made his first podium appearance of the 2022 AMA Endurocross Series, kicking off the second round of racing with a runner-up finish in Moto 1. Securing fifth and sixth-place finishes in the next two races, Haaker narrowly missed the overall podium in fourth, finishing just behind Husqvarna Motorcycles-mounted Ryder LeBlond, who claimed third.
It’s been a challenging start to the season for the five-time reigning series champion but he continues to build momentum early in the championship season. Although Haaker took fourth in the hot laps, his best time was incredibly close to the front-runners at just over one second off of the leader’s pace. In Moto 1, he claimed the early lead. Haaker continued to battle the obstacles on the course, but, after a few laps, he had slipped to second. He remained there until the checkers flew. Haaker then had his work cut out for him in the second moto, where he had to make the climb from 11th early on. Lap after lap, he steadily conquered the terrain and was able to make his way up to fifth by the end of the race. In the final moto, a fourth-place start seemed promising. However, just before the halfway mark, some mistakes caused Haaker to slip back to sixth where he ultimately crossed the finish line. His results earned him fourth on the night.
“Round two of EnduroCross was a tough night to take, Haaker said. “After a dismal round one, I was looking to rebound here and get the train back on the tracks. The night started off smooth and strong with a second in race one, but the next two races I had some costly errors that left me off the podium for the night. It’s been a tough start to the season, but everything is there to make it happen. I’m confident we will get back on form and in the winner’s circle soon.”
Husqvarna Motorcycles-mounted Ryder LeBlond placed seventh in hot laps and was hoping for a strong start to the night’s competition. However, Moto 1 would prove to be difficult for him. Starting inside of the top five, he struggled on the second lap and dropped several positions. He would ultimately finish ninth. Moto 2 was full of ups and downs for LeBlond. Starting off in second, he was quickly shuffled back to third. He rebounded and was able to power into the lead by the third lap, but he was only able to hold the spot for a few laps before falling back to second, where he finished the moto. LeBlond put in another stellar performance at the end of the night, holding the lead for almost the entire last moto before slipping to second on the final lap. His scores allowed him to claim third place overall.
“It was a good race at Round 2 of EnduroCross in Oregon,” LeBlond said. “I finally found my groove out on the track and was able to lead multiple laps in Moto 2 and 3 battling for the win. I ended up with 9-2-2 moto scores for third overall. I’m happy to put my Husqvarna on the box!”
Round 3 of the 2022 AMA EnduroCross Championship will take place on Saturday, October 1 in Denver, Colorado.
EX Pro Results – Round 2
1. Jonny Walker (BET) 1-1-1
2. Cody Webb (SHR) 3-4-1
3. Ryder LeBlond (HQV) 9-2-2
4. Colton Haaker – Rockstar Energy Husqvarna Factory Racing, 2-5-6
Overall Championship Standings
1. Taddy Blazusiak, 46 points
2. Jonny Walker, 43 points
3. Trystan Hart, 37 points
4. Ryder LeBlond, 33 points
5. Colton Haaker – Rockstar Energy Husqvarna Factory Racing, 33 point
About Michael Le Pard 8444 Articles
"Mr. Totalmotorcycle". Owner and Founder of Total Motorcycle. Supporting over Motorcyclists and Motorcycling for 23 great years. Total Motorcycle is my pride and joy and being able to reach out 375 million people has been incredible but I could not have done it without the support of my visitors, readers and members, thank you so much! You are making a difference to millions of riders worldwide. Thank you.
Website Facebook Instagram Twitter YouTube LinkedIn

Red Bull KTM Factory Racing are ready to take on the 2022 Rallye du Maroc. The five-stage event marks the third round of this year’s FIM World Rally-Raid Championship. With Matthias Walkner still recovering from […]