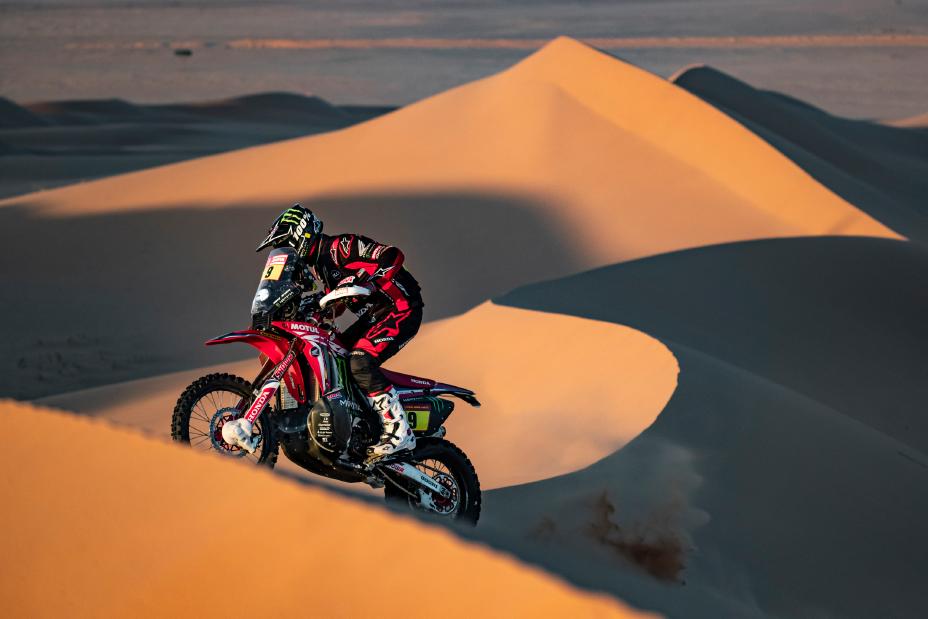 With a second-place finish in today’s final stage of the 2020 Dakar Rally, Ricky Brabec wrapped up the overall victory in the grueling international endurance event. Riding a CRF450 Rally dirt bike for Monster Energy Honda (Honda Racing Corporation’s factory rally effort) the 28-year-old completed the nearly 5,000-mile route across 11 days of racing, with a combined total time of 40 hours, 2 minutes, 36 seconds, becoming the first American to win what is generally considered to be the most grueling off-road motorsports competition in the world.

The 2020 Dakar Rally started on January 5 in Jeddah and passed through cities including Al Wajh, Neom and Riyadh before today’s 267-mile stage from Haradh to Qiddiya. Brabec topped Stage 3 and assumed an overall lead that he never relinquished, adding a second win on Stage 6. The entire Monster Energy Honda team turned in a masterful performance, with Chilean José Ignacio Cornejo topping Stages 4 and 12, Argentine Kevin Benavides winning Stage 7 and Spaniard Joan Barreda taking Stage 10. On two occasions, the team swept the stage podium. Stage 8 was cancelled in memory of former Monster Energy Honda rider Paolo Gonçalves, who lost his life in a Stage 7 crash.

The Dakar Rally began in 1979 and traditionally ran from Paris, France, to the Senegalese capital whose name it still uses. In 2009 it was moved to South America, and this 2020 edition was the first to be held in the Middle East, entirely within the Kingdom of Saudi Arabia. Prior to this year, Honda had a total of five victories in the motorcycle class (all in the 1980s), at the hands of Italian Edi Orioli and Frenchmen Cyril Neveu and Gilles Lalay. No American rider had topped the Dakar Rally before Brabec’s accomplishment today, with Danny LaPorte, Jimmy Lewis and Chris Blais being the only U.S. riders to have finished on the podium.

A native of Southern California (Born in Mira Loma, currently living in Oak Hills), Brabec grew up racing in the Mojave Desert, eventually earning a Baja 1000 win in 2014 and AMA Hare & Hound National Championships in 2014 and 2016. This was his fifth attempt at the Dakar Rally, and last year saw him take his first stage win and assume the overall lead near the end, only to have a mechanical issue force him out of the race. This year he returned with a larger American support crew, including Chief Mechanic Hidenori Hanawa, consultant Johnny Campbell and technician Kendall Norman.

“I’m really excited to be here for Honda and for America as well,” Brabec said. “To be the only American to accomplish this goal is amazing. I think it’s really a dream come true. Now we’ve got to set our goals higher and accomplish more…. It was a big, tough race. A lot of kilometers. The team worked great together. The riders were good and the whole team worked well together so I’m really happy. The bikes were really good. We are all here. We are all happy and safe. That was the first goal. I can’t thank everyone enough – Honda, Monster and every one of the sponsors behind us. Thank you all so much.”

“Everyone at American Honda is so proud of Ricky for this historic Dakar Rally win,” said Chuck Boderman, Vice President of Powersports at American Honda. “We’ve enjoyed watching him grow and mature under the mentorship of Johnny Campbell over the past few years, and we knew after last year that he had taken a big step. For the past couple weeks, we and our customers have cheered for Ricky and his team as we watched him close in on his dream, and now that he has pulled it off, we’re delighted that it was an American who has put Honda back on top in the granddaddy of rally racing.”

Next-generation Automated Driving Technology on Hold due to Economy

Munich/Stuttgart. The BMW Group and Mercedes-Benz AG are putting their cooperation on development of next-generation technology for automated driving temporarily on hold. Following extensive review, the two companies have arrived at a mutual and amicable agreement […]

Yamaha Motor Europe is pleased to announce that MJC Yamaha Official EMX125 Team will field an all new, young and exciting three-rider line-up for the 2020 EMX125 Championship. The team has recruited Kay Karssemakers and […]