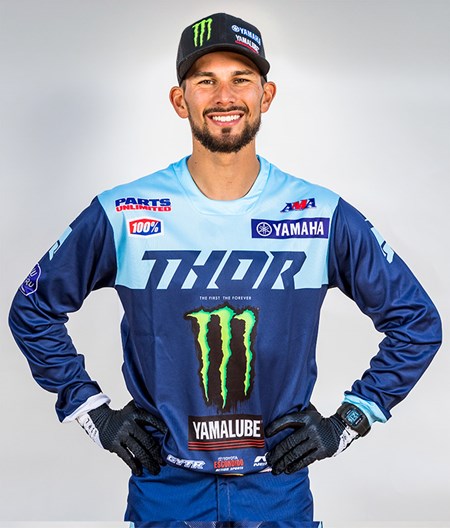 Dylan Ferrandis and Colt Nichols found themselves back on the podium at the Monster Energy AMA Supercross round on Saturday night, finishing second and third, respectively. Broncos Stadium at Mile High hosted a cold and sometimes snowy day of racing of the penultimate round of the Western Regional 250SX championship, but the Monster Energy Star Yamaha Racing duo rode through it and came out with a double podium for the team.

The conditions were quite different from the start of the day to the main event, but one thing that didn’t change was the cold. Ferrandis got out to around a seventh place start in the main event and did his best to work through the pack on the tight track. He worked his way back up to third by lap seven and eventually made it into the runner up spot by lap 13, but it wasn’t enough time for him to make a run for the leader and was forced to bring home his fifth second-place finish of the season.

Nichols started the night off with a heat race win and looked more like himself from the start of the season. When the gate dropped, Nichols fell in right behind his teammate around eighth and was forced to make a charge to the front. By lap five he was already in fifth but with the tight track it took him longer than he wanted to make the pass stick for the podium on lap 17. The third-place finish was Nichols’ fifth podium of the season.

Ferrandis’ second-place finish kept him in the title fight for the Western Regional 250SX championship just eight points back with one round remaining for the west. With his third-place finish, Nichols slightly extended his cushion in third in the standings.

“The track tonight was very basic, so you had to capitalize on the start and we didn’t. Our bike was great thanks to our great technical staff. I’m proud of the guys and we will fight all the way through Vegas where we know anything can happen.”

“The track was difficult to pass on tonight and that really cost me after starting around eighth. I didn’t struggle with the altitude so much as I did with the cold. I never felt like I could get warm and it was tough. But it is how it is. It’s not the scenario we were hoping for after two very good weekends. We have a weekend off and will use that time to keep working. We will give it everything we’ve got in Las Vegas and make sure it goes down to the final lap for the championship.”

“It was a good night at the Mile High Stadium overall. I felt I had the speed to contest for the win but just didn’t execute the start. I ended up messing it up and got pushed out, so I had to come through the pack. The team really did our homework coming into this race so the bike felt awesome and I could really push through the pack. After the start I really had to work for it, but I rode like myself and I’m leaving this race happy knowing that I left it all out there on the track, which is about all I can do. It’s all good though, I’ve got a few weeks to clean it up and to come out swinging at Vegas”

Varese, Italy, September 19, 2020 – MV Agusta Motor S.p.A. has announced a new strategic partnership with QJ-Motor Co. for the distribution of the brand’s motorcycles in China. QJ Group is one of the largest […]

Husqvarna Motorcycles North America, Inc. is pleased to announce details for its 2021 Contingency Support Program on Husqvarna-Motorcycles, offering competitive earnings for amateur and professional racers across all major forms of racing in the U.S. Heading […]