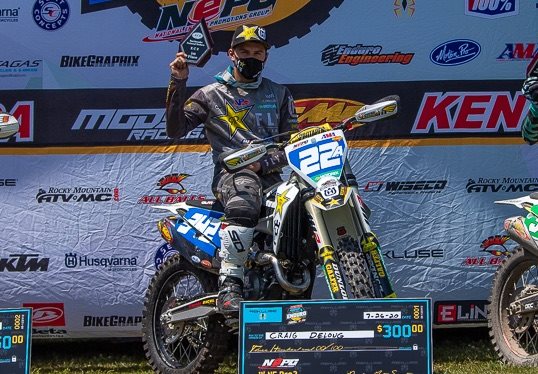 Rockstar Energy Husqvarna Factory Racing Team’s Craig DeLong raced his way to the center of the NE Pro2 podium on Sunday with a dominant performance at Round 3 of the AMA National Enduro Series in Cross Fork, Pennsylvania.
DeLong came out swinging as he captured the first two test-wins of the day, establishing a clear lead early on. He maintained consistency and poise throughout the six tests as he remained inside the top-two all afternoon with a total of four wins and two runner-up scores. DeLong missed the opening round of the series but he remains in title contention early on as he sits second overall after three rounds of racing.
Craig DeLong: “It was a good day, I had no crashes and rode pretty solid all day long. The tests were good all day – I would say test four was the most challenging because it was really rocky so you had to really read the trail and know where you were going. All-in-all, I had a fun day and I’m happy to get the win.”
Next Race: Round 4 – Little Racoon National – August 2, 2020
Rattlesnake National Enduro Results
NE Pro2 Results
1. Craig DeLong – Rockstar Energy Husqvarna Factory Racing Team
2. Cody Barnes (BET)
3. Benjamin Nelko (HON)
NE Pro2 Championship Standings
1. Cody Barnes – 80 points
2. Craig DeLong, Rockstar Energy Husqvarna Factory Racing Team – 55 points
3. Jonathan Johnson – 51 points
About Michael Le Pard 5066 Articles
"Mr. Totalmotorcycle". Owner and Founder of Total Motorcycle. Supporting over Motorcyclists and Motorcycling for 21 great years. Total Motorcycle is my pride and joy and being able to reach out 330 million people has been incredible but I could not have done it without the support of my visitors, readers and members, thank you so much! You are making a difference to millions of riders worldwide. Thank you.
Website Facebook Instagram Twitter YouTube LinkedIn

Following six long and challenging days of racing in South America, the duo of Adrien Van Beveren and Xavier de Soultrait find themselves well-placed inside the top four of the 2018 Dakar Rally’s provisional overall […]

When it comes to upgrading motorcycle performance, one popular option is exhausts. It’s one of the first customizations owners make, and it’s easy to understand why. In terms of complexity, cost, and potential gains, you […]

THE EUROPEAN KTM ADVENTURE RALLY GOES INTO THE THIRD ROUND

December 13, 2018 Michael Le Pard News Comments Off on THE EUROPEAN KTM ADVENTURE RALLY GOES INTO THE THIRD ROUND