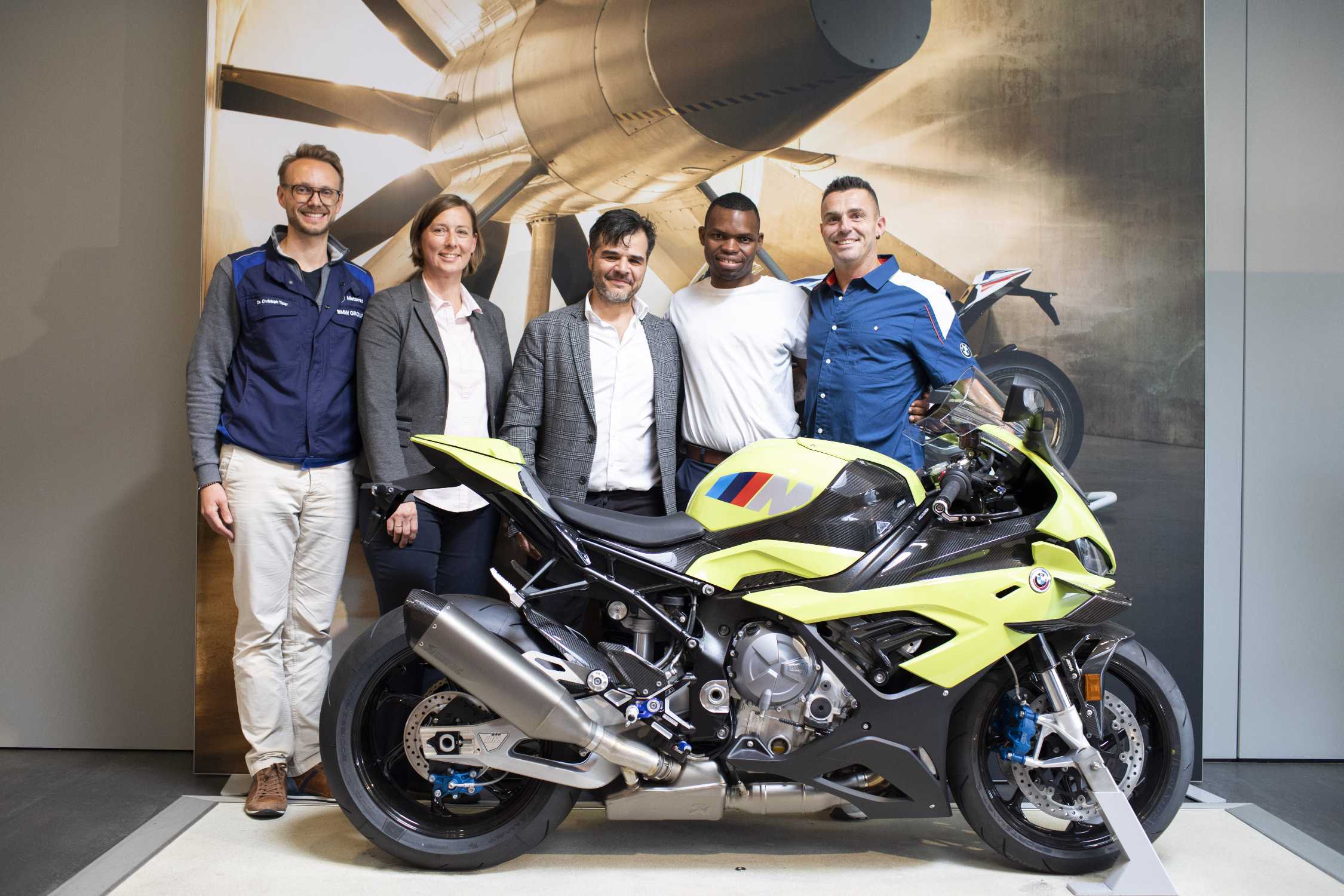 Berlin. Two days before the BMW BERLIN-MARATHON gets underway, Emiliano Malagoli and Nyasha Derera, two of the entrants in Germany’s biggest marathon and the fastest marathon in the world, visited the BMW Group plant in Berlin. The all-electric BMW CE 04 is just one of the models made at the home of international BMW Motorrad production. This model will be in action at the BMW BERLIN-MARATHON as the route and official vehicle.

It is the first time taking on the almost 42 kilometres in the German capital for both athletes – but they have both already overcome other, far greater challenges. Malagoli’s right leg, below the knee, had to be amputated after an accident, but that did not end his career as a motorcycle racer. Derera had a difficult childhood and adolescence as a result of difficulties with cognitive development, but went on to fight for inclusion and recognition through running, and is now an ambassador for the Special Olympics movement and the Special Olympics World Games 2023 in Berlin.

There is another thing that the duo has in common: their commitment to their fellow human beings, to equality and participation, and to the unifying power of sport. The Italian set up a foundation that supports people who have had similar experiences to him. Through various initiatives, he makes sport and motorcycles accessible to people with physical limitations.

As a Special Olympics ambassador, Derara is a global advocate for equal opportunities for people with disabilities, and motivates other athletes not to give up on their dreams despite all the obstacles.

At BMW Group Plant Berlin, the two athletes met employees ahead of the BMW BERLIN-MARATHON, including the Head of Human Resources Davide Vitolo, the Head of the Medical Service Christoph Tisler, and Dorothea Grützmann from Corporate Integration Management, to discuss inclusion and the significance of sport.

“I am running to send a message to every city: Inclusion is important. I also want to represent my fellow athletes, and to show them that they also can do it,” Derara said. “Thank you to BMW for setting a standard and making difference to so many people. Thank you for being champions of inclusion. The world is a better place when people come together despite disability, despite colour or whatever. We need to accept each other as we are.”

Malagoli said: “When we all are running together on Sunday, including world-record holder Eliud Kipchoge and many more, we are all athletes, not people with a disability or not. We are athletes. Period. That’s how it always should be.”

“At the BMW Group , we all work together, there is no separation. We all are one team and share one goal,” Vitolo said. “It’s the same like in a marathon, except our goal is to produce motorcycles.”

With 45,000 athletes taking part this year, the BMW BERLIN-MARATHON is the biggest marathon event in Germany. The route through the German capital is the fastest in the world and the scene of numerous world records. The BMW BERLIN-MARATHON is one of the sixth biggest and most important marathon events in the world, which together make up the Abbott World Marathon Majors. BMW has been the title partner since 2011.

Emiliano Malagoli is an Italian motorcycle racer who has been competing in the Bridgestone Championship Challenge since 2007. He lost his right leg below the knee in a road accident in 2011, and still has pins in his left leg to this day. Before even leaving the hospital, he had already decided that he was not going to let this be the end of his career. Just seven months after his accident, he was back on his bike taking part in test rides, and just 400 days after the last of twelve operations he was contesting races once again.

With support from BMW Italy, the 27-year-old has been racing in the Italian Octo Cup and the European Handy Bridgestone Cup, on a specially modified BMW 1000 RR, ever since.

Malagoli, who hails from Lucca in Tuscany and was unable to walk even 100 metres on his prosthetic leg initially, took up running in 2019 – a pastime that soon became his second sporting passion. He completed the New York Marathon that same year. On Sunday, Malagoli will make his debut in the BMW BERLIN MARATHON, alongside his friend Omar Bortolacelli, who will be competing on a handbike.

However, Malagoli didn’t settle for making an impressive comeback and mastering a new sport – he also wanted to help other people overcome similar challenges. In 2013, he launched the foundation “Di.Di. Diversamente Disabili”, to give young people with disabilities access to sport as a good opportunity for getting involved in something and to aid recovery. The foundation also offers training courses covering topics including road safety and healthy living.

“Di.Di. Diversamente Disabili” also runs a riding school for obtaining the special motorcycle licence for disabled persons, uses its expertise to help provide specially modified motorcycles, and helps riders get back out on the racetrack – in national and European championships for disabled persons, launched by Malagoli himself.

Nyasha Derera is a runner from Zimbabwe, International Global Messenger for the Special Olympics, and will be fulfilling a dream at the BMW BERLIN MARATHON when he takes to the route alongside some of the biggest names in the sport, including Olympic champion Eliud Kipchoge from Kenya. The 25-year-old from Harare in Zimbabwe has a personal best of 2:23 hours, a respectable time, but his achievements go way beyond mere figures – they are more about respect. Something he has had to work – or run – hard to achieve.

Derera lost both parents as a small child and was brought up by his grandmother. He became isolated at an early age and struggled to be accepted by those around him. Instead, he was teased and labelled ‘crazy’. In school, he was kept separate from his fellow students, and so began his battle with internal isolation and external separation. Derera was aware of his cognitive impairment, but when he discovered running there was simply no stopping him, despite constantly facing rejection. Time and again he was told that he was good for nothing.

Derera found stability and motivation in his daily training. Then, roughly ten years ago, the Special Olympics Programme was launched in his homeland. The inclusive sport portfolio gave Derera a breath-taking boost. Much changed around this time; athletes with and without disabilities were now training together, people with mental disabilities were viewed in a totally different way, and the focus was now on speed, stamina, sporting performance and team spirit. Inclusion put the wind in Derera’s sails and he won no fewer than 17 national gold medals over various distances.

Derera wants to spread the virtue of sport and the Special Olympics. As an International Global Messenger and Health Messenger, he fights for equal opportunity for people with disabilities and encourages other athletes to hold onto their dreams. It is in this role that Derera starts at the BMW BERLIN MARATHON. In June 2023, the Special Olympics World Games will take place in Germany for the first time – also in the capital. He is here to ensure that the 7,000 athletes set to attend these games receive the attention they deserve – and to give them the same boost that changed Derera’s life forever.

About Michael Le Pard 8444 Articles
"Mr. Totalmotorcycle". Owner and Founder of Total Motorcycle. Supporting over Motorcyclists and Motorcycling for 23 great years. Total Motorcycle is my pride and joy and being able to reach out 375 million people has been incredible but I could not have done it without the support of my visitors, readers and members, thank you so much! You are making a difference to millions of riders worldwide. Thank you.
Website Facebook Instagram Twitter YouTube LinkedIn