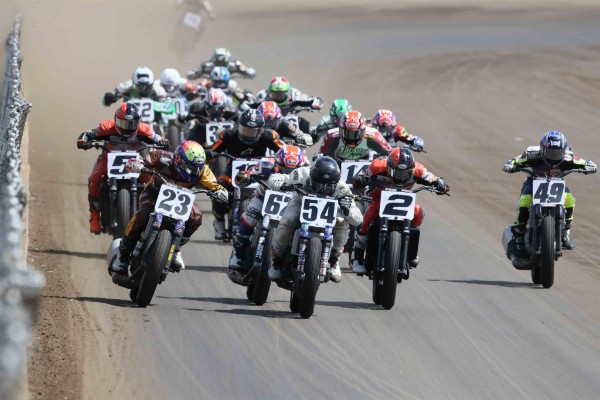 DAYTONA BEACH, Fla. (February 21, 2018) – American Flat Track (AFT) is proud to confirm that Cycle Gear has renewed its commitment to serve as a proud sponsor of the world’s preeminent dirt track championship in 2018.

As America’s largest retailer of motorcycle parts and apparel with over 130 stores in 35 states, Cycle Gear and its staff of knowledgeable professionals are ideally positioned to spread the word of the new golden age of flat track racing to motorcyclists all across the nation. As part of that effort, Cycle Gear will provide fans with a means of purchasing race tickets for key events at select brick-and-mortar locations, while also spearheading an digital outreach campaign.

“Cycle Gear is one of the motorcycle business’s great success stories and we are delighted to partner with them again in 2018,” said Michael Lock, CEO of AFT. “They serve both street and dirt customers, and their support of AFT – the fastest growing motorcycle sport – is very welcome.”

Following the blueprint laid out by last year’s highly-successful partnership, promotional events will lead up to select AFT rounds featuring bike nights, pre-race parties, and giveaway opportunities, including a chance to obtain race day tickets. American Flat Track will again be featured as a contributing sponsor at each bike night while assisting in the in-store giveaways and the promotion of the series at Cyclegear.com.

In addition to its series sponsorship, Cycle Gear is committed as an event sponsor at select rounds this season, including the Calistoga Half-Mile on May 5 and the Harley-Davidson Sacramento Mile on May 19.

Following Pablo Quintanilla’s victorious outing in the United Arab Emirates less than a month ago, the Chilean rally star has been joined by his team-mate Andrew Short in Morocco, with the Rockstar Energy Husqvarna Factory […]

Team Suzuki Press Office – January 8. It is often considered that defending a title can be tougher than winning it in the first place, but Auckland’s Suzuki rider Daniel Mettam is quietly confident that […]