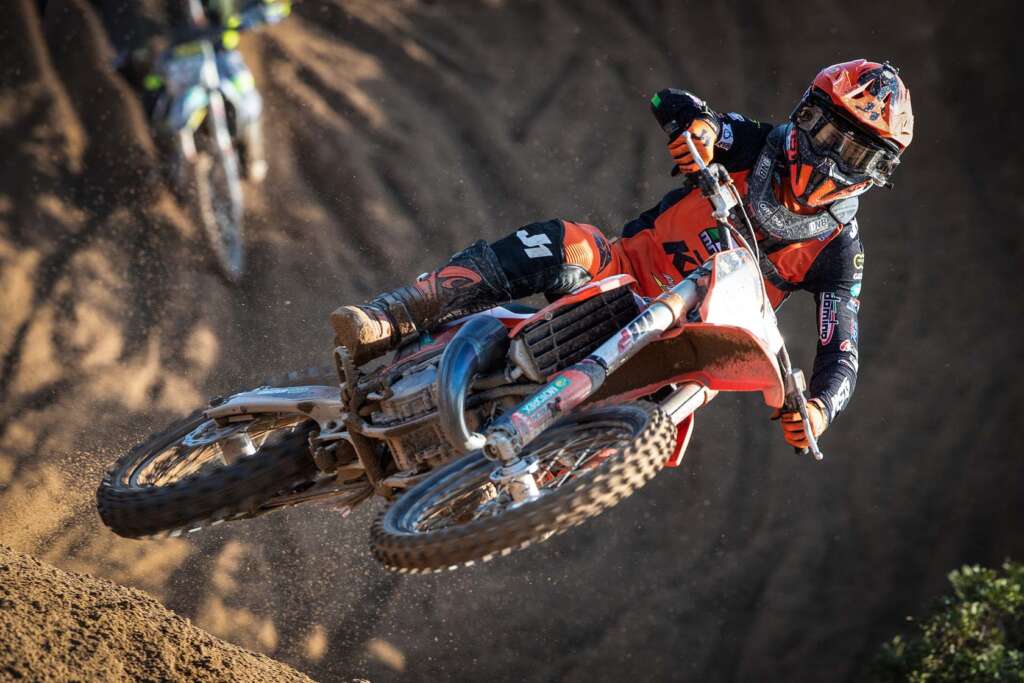 Monster Energy Yamaha Factory MX2’s Maxime Renaux made his seventh podium appearance today at the ninth round of the FIM Motocross World Championship in Afyonkarahisar, Turkey. The Frenchman finished on the same points as the defending World Champion Tom Vialle but was summoned to the second step of the podium, as the result of the final race decided the Grand Prix overall. Nevertheless, the ‘959’ leaves Turkey with an even greater championship lead. Thibault Benistant finished fourth overall, narrowly missing the podium by 2-points, while Jago Geerts finished eighth overall after a fall in the final race.

Following a podium performance two days ago, Renaux returned to the Afyon circuit today beaming with confidence. The French ace felt great aboard his YZ250FM right from the get-go and instantly proved his prowess by setting the fastest lap in Timed Practice to start from pole position for the second time this season. His teammates, Thibault Benistant and Jago Geerts, ended the qualifying session in 13th and 14th, respectively.

Consolidating his place at the top of the MX2 Championship Standings, Renaux quickly moved from third up into second position in Race 1 before executing an extraordinary pass on the defending world champion Tom Vialle to take the lead on lap 4.

As Renaux claimed his fifth victory of the 2021 season by a margin of 17-seconds, Geerts battled his way from eighth up into fifth in the first two laps. Showing some solid speed, the ’93’ was able to capitalize on a mistake from Mathijs Boisrame in the latter stages to secure fourth position.

With a good start being essential to a good result at a fast, one-lined track such as Afyon, Benistant had to work hard as he rallied his way up into the top-10 after starting outside the top-15. With many riders to pass on his way to the front, the rookie brawled his way to a seventh place finish.

In the second and final race of the weekend, Renaux was again impressive. The 21-year-old hounded the race leader, Vialle, for the first 15-minutes before a rock hit his goggles and popped the lens out. In order to reduce the risk of getting a stone or roost in his eyes, the YZ250FM racing star had to back off and settle for second position, and consequently, second overall.

Also in Race 2, a phenomenal start had Benistant in a prime position to latch onto the back of the much more experienced MX2 riders, Renaux and Vialle. While the young YZ250FM rider could not quite match the pace of his French compatriots, he still rode a strong race and maintained third position for all but three laps. He eventually finished fourth, which was enough for fourth overall.

Meanwhile, Geerts finished 11th after falling from ninth position on lap 16, and ended up eighth in the overall classification.

After two Grand Prix rounds in Turkey, all three Monster Energy Yamaha Factory MX2 riders remain inside the top-five in the MX2 Championship Standings. Renaux now leads by 49-points over Mattia Guadagnini, while Geerts is a further 22-points adrift in third position. Benistant is currently 100-points off the lead. He rounds out the top-five.

After another postitive MX2 Grand Prix, Yamaha continues to lead the 2021 Manufacturer’s Championship by 16-points.

“The main goal is to keep extending the lead, and we managed to do that today. I am happy with that, but I also have to say I am a little bit disappointed that I finished second today because I am here to win, and second in the second race meant I was only second today and I wanted to win. I felt I could have won but I had a small problem in the second moto with the lens coming out of the goggles at the bottom because I was hit by a rock off the back wheel of Tom (Vialle). No excuses, though. I am really happy to have a 49-point lead in the championship, so I will keep building from here.”

“I felt better today than I did in the weekend at the last GP here. I struggled a little bit to get a good lap time this morning, but in the races, I felt really good. The starts were quite difficult because of my time in qualifying. I had to start really far outside. I still managed in the second race to have a good start, but I wasn’t riding like I know I can in the second moto, so I lost one position to Jed (Beaton) and finished fourth. Sometimes we have days like these. Fourth is not so bad.”

“The first heat was pretty good. I started ninth and was able to work my way up to fourth in the end and I was really happy with that. In the second race, I was just not riding good. I had a bad start and then a crash and finished 11th, so I am not happy with that. There is not a lot more I can say. I will just work hard to be better at the next GP.”

About Michael Le Pard 6335 Articles
"Mr. Totalmotorcycle". Owner and Founder of Total Motorcycle. Supporting over Motorcyclists and Motorcycling for 21 great years. Total Motorcycle is my pride and joy and being able to reach out 330 million people has been incredible but I could not have done it without the support of my visitors, readers and members, thank you so much! You are making a difference to millions of riders worldwide. Thank you.
Website Facebook Instagram Twitter YouTube LinkedIn