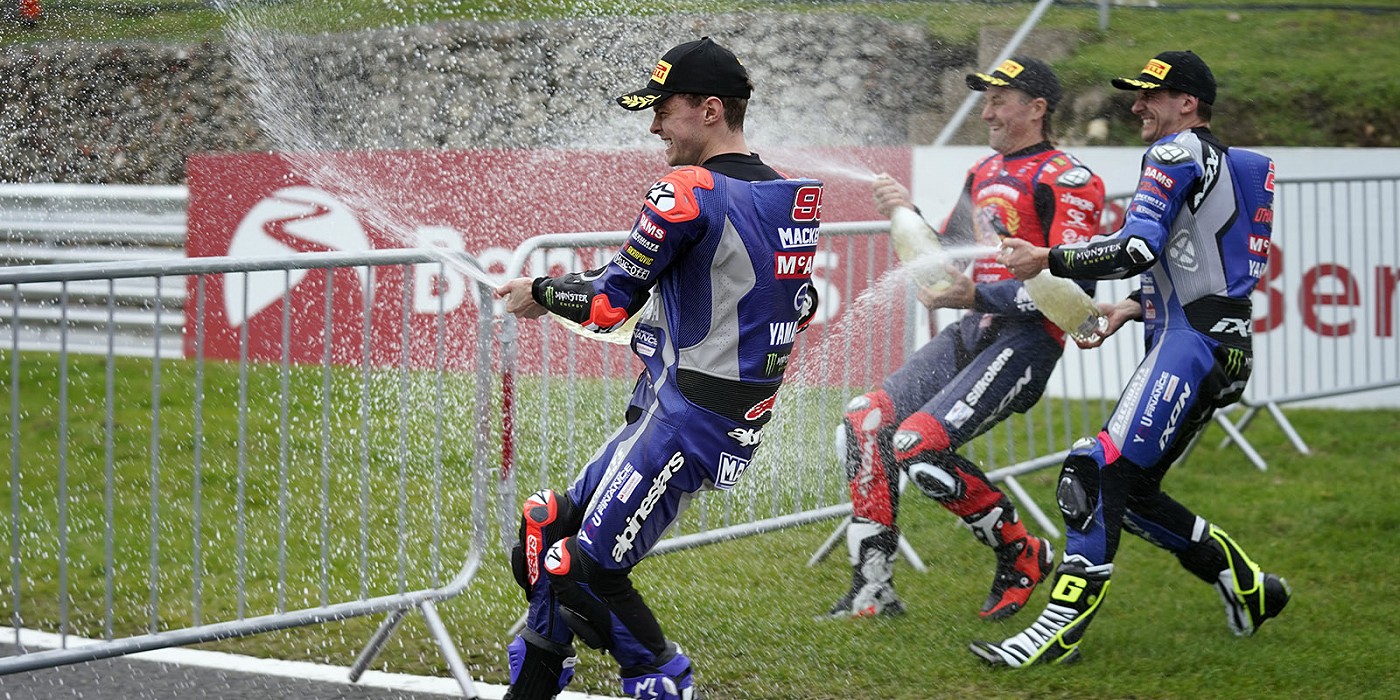 The final round of the 2020 Bennetts British Superbike championship was a mostly successful one for McAMS Yamaha, taking a win on Saturday and three further podium finishes in Sunday’s 20-lap races at an overcast Brands Hatch circuit meaning Jason O’Halloran would finish a career-best second n the 2020 title chase.

Just seven points adrift in the title hunt, O’Halloran was determined to fight for victory in the two 20-lap races at the Kent circuit. Starting from pole, the Australian slipped to fourth in the early stages of round 17 but quickly regained ground, passing Christian Iddon for third and set after team-mate Tarran Mackenzie who had held his second-place grid slot.

Chasing race-leader Josh Brookes, the 24-year-old made a costly mistake, crashing out of the race at Druids on lap eight, promoting his Aussie team-mate into second and taking him out of the title fight. The leading pair traded fastest laps, with the gap fluctuating between 1.8 and two seconds. With the hammer down, O’Halloran closed the gap, but the 32-year-old came just short of his second victory of the weekend but did limit the damage done in the title chase.

Twelve points behind going into the final race of the year, O’Halloran once again made a bright start, jumping to second at the halfway point of the opening lap. Mackenzie also had a promising start, although slipping to third from his pole position, the two-time winner looked comfortable as the leading trio escaped the chasing group.

The former British Supersport champion rode shotgun to his team-mate hoping to see the team take the title, but when it became clear Brookes was getting away he made a move and tried to spice it up that way. Having a few out-of-the-seat moments, he battled on but couldn’t get close enough to make the pass on the leader, settling for second with O’Halloran taking a comfortable third to solidify his second position in the 2020 BSB standings.

The 2020 YZF-R1’s maiden season was nothing but remarkable, securing a total of five wins and 12 further podium finishes, ending the year second in the manufacturers’ standings. McAMS Yamaha finished an incredible season second in the team’s trophy championship, picking up 333.5 points throughout the 2020 season – marking the team’s best ever year in the Superbike class.

“We gave it our all this weekend, of course I am disappointed not to have won the championship but we need to remember that this has been our best year in British Superbikes. 11 podiums including three victories is not bad considering we’ve only done half a season, so I’m pretty happy. I knew I had to win on Saturday to keep us in with a chance and we did exactly that, but Josh upped the game today and fair play to him he beat us fair and square, but as I say, we can’t be too disappointed as it’s been a great year for both me and the team.”

“It’s been a good season, my best so far in the Superbike class with more wins and podiums than any other year. We didn’t get the best of starts to the season at Donington and Snetterton, but since then it has been pretty good. I felt pretty good in the race yesterday so coming into today I felt strong, we got a good start and I was closing in on Josh but I went in too deep at Druids and crashed out. In the final race, I sat behind Jason for a while to see whether he was going to make a pass, and when it looked like he wasn’t going to I decided to pass him and see if I could make an inroad on Josh, which I did. When I got close enough, I had a massive moment out of Sheene, and then about every single corner! I knew on the last gap he might back of slightly so I went for it, but it wasn’t quite enough. I was happy to bounce back with a podium, another double podium for the team to end a strong year. Congratulations to Jason with second in the championship.”

“It’s hard not to be disappointed when you walk away second as that’s not what we are here to do. We come racing to win and we gave it our all this weekend to make it happen but it wasn’t quite enough. I can’t fault how Jason rode this weekend, his win on Saturday came in one of the best races I have seen in a very long time – you have to be on the very top of your game to win a race like that.

“We couldn’t quite do enough to beat Josh today, but it is what it is, we have had our best ever year in the superbike class and it’s only our fourth year.

“Taz rode really well this weekend too, it was a shame to see him crash in race two but he was pushing! He did all he could in the final race too, so it was good to see him take another podium to round off a strong year for the whole team.”

Varese, May 28, 2020 – MV Agusta is announcing the appointment of Filippo Bassoli to the position of Group Marketing Director, effective June 1st, 2020. Bassoli will report to MV Agusta’s CEO Timur Sardarov and […]