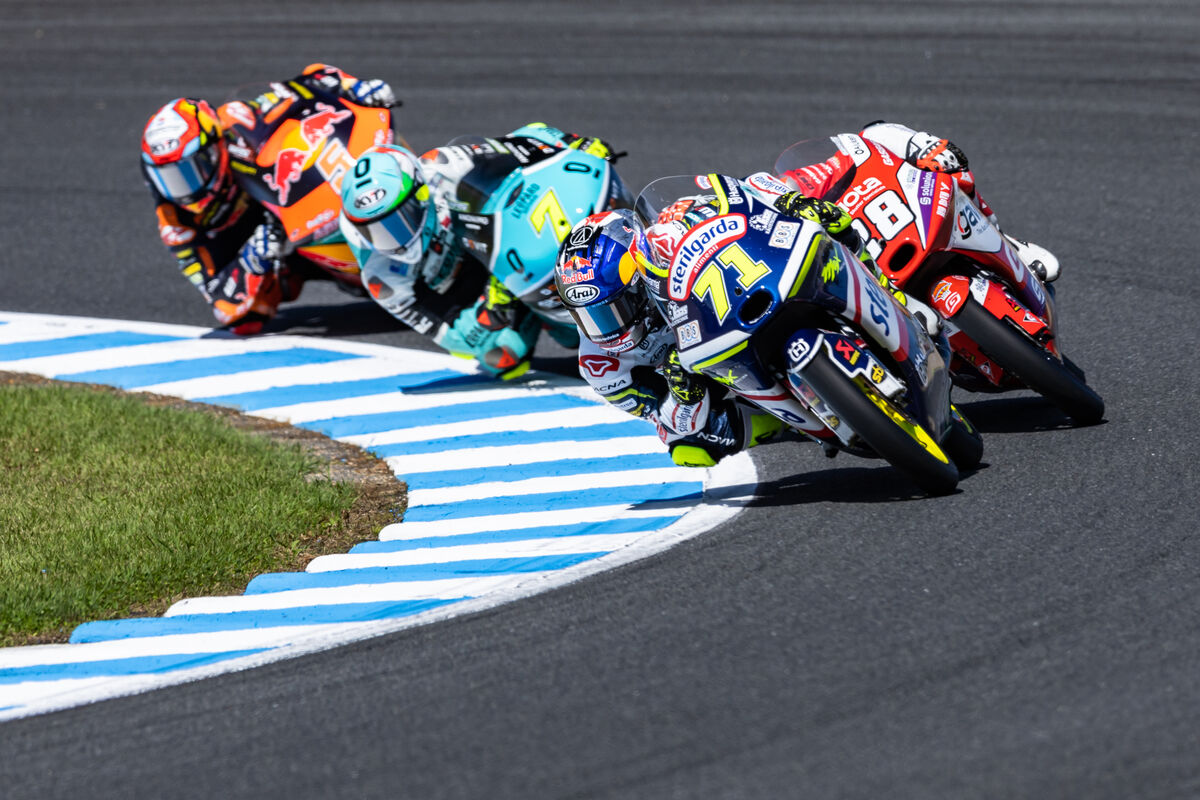 MotoGP travelled swiftly east across the time zones from Spain to Japan for round sixteen of twenty in 2022. For the Sterilgarda Max Racing Team the second consecutive weekend of action took place on a vastly different ‘platform’, with the Mobility Resort Motegi circuit flat, fast and with tough demands on braking and hard acceleration.

The team were optimistic of more podium prizes, particularly with Ayumu Sasaki feeling the warmth of home support for the first time since 2019. The 21-year-old had finished runner-up in Aragon last week and carried the hopes and gaze of the Japanese public who braved wet and humid conditions at Motegi on Friday and Saturday. Both Ayumu and teammate John McPhee used their FR 250 GP motorcycles to slot into the top five of the opening (and extended) Free Practice session and were separated from provisional Pole Position by just three tenths of a second.

After a wet set of FP periods and the Q2 run on Saturday, the pair gained 4th and 12th on the grid and were set for the 20-lap distance. Sunday dawned warm, sunny and with bright blue skies. Sasaki and McPhee both started inside the top ten and the former was at the front of the pack with Izan Guevara for company from the outset. The battle for the lead was formed by a quartet with Sasaki often setting the pace. By the final stages of the race Ayumu was feeling the effects of rear tyre wear and was not able to threaten Guevara or Dennis Foggia. He became the first Japanese on a home podium for almost fifteen years in 3rd spot. It was Sasaki’s seventh rostrum appearance of the season.
McPhee was in the second gaggle and eventually crossed the finish line in 7th for 9 points.
After rising to 4th place in the championship table in the wake of the Grand Prix at MotorLand Aragon, Sasaki banked 16 points in Japan and keeps the same slot; 17 points from the top three. McPhee is 17th. Sterilgarda Max Racing Team are 4th in the teams’ contest.
MotoGP ploughs ahead with its continent-hopping trajectory. The third Grand Prix in a row will take the championship to the hot climes of Buriram and the Chang International Circuit for the OR Thailand Grand Prix.
Ayumu Sasaki: “Yeah, I’m happy to finish on the podium but I expected a bit more, especially as I was leading quite a lot of laps. Near the end I started to feel the rear tyre drop and then it was difficult to fight. Anyway, the podium is good and we have to try and improve for Thailand. I’m happy I could give this third place to all the Japanese fans here.”
John McPhee: “Today I was able to fight well in the race; this has been a weak point for me so far this season because I’ve had the speed but not been able to battle. We ticked this box today but I think I was against the three hardest brakers in the category. I did what I could and I’m happy with how I am riding. This was a step in the right direction.”

The Rockstar Energy Husqvarna Factory Racing Team headed to Mechanicsville, MD for the penultimate round of the 2017 Pro Motocross Championship and recorded a milestone day after Zach Osborne piloted his Husqvarna FC 250 to […]