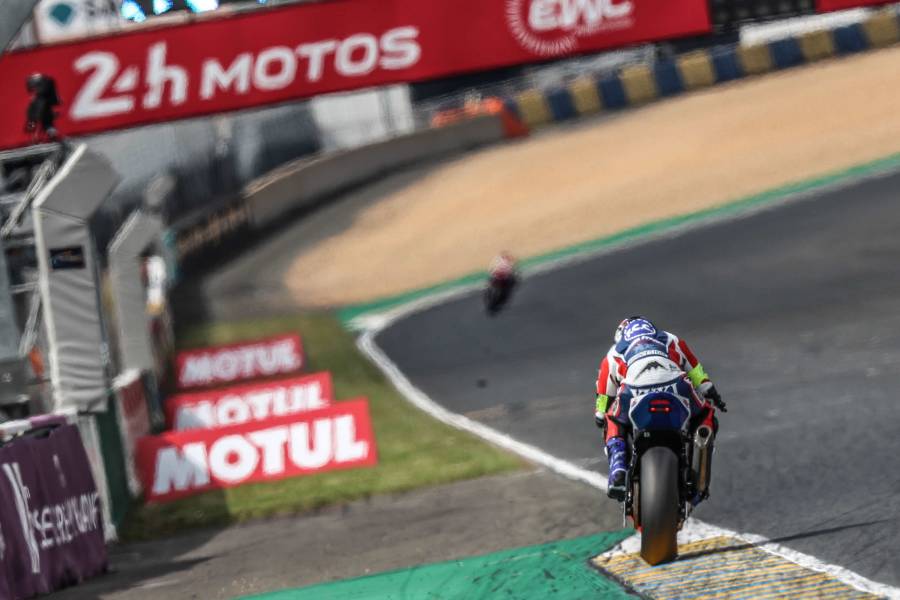 After two very warm qualifying sessions at the Bugatti circuit, FIM Endurance World Championship team F.C.C. TSR Honda France will start from sixth position on the grid for the 24 Heures Motos at Le Mans aboard the Honda CBR1000RR-R Fireblade SP. In the Superstock category, RAC41 Chromeburner started strongly to line up third in class for tomorrow’s race.

On Thursday, last year’s winners of the event finished the first qualifying in fifth place with a best lap time in 1:37.221, saving some tyres for the final qualifying as the opening session proved too hot to set a real qualifying pace.

The team also obtained the fifth best time with a 1:36.789 lap during the second qualifying session at Le Mans on Friday. The team wanted to test a new front tyre as the day ended up being much hotter than expected, so it was important to gain data on the harder compound which will be needed for the race. In the third session of the qualifying, a crash from Mike prevented the team from improving the lap time.

The combined qualifying times gave the Honda’s endurance specialists Josh Hook, Mike Di Meglio and Yuki Takahashi, an average lap of 1:36.789 and the team, qualified on sixth place aboard the Fireblade SP.

Further Honda teams lining up for the 24 Heures Motos on the CBR1000RR-R Fireblade SP include the RAC41 Chromeburner that obtained a strong qualifying, where they finished 14th fastest overall (1:38.518) and third best lap time in the Superstock Category while National Motos will start 18th overall.

About Michael Le Pard 6031 Articles
"Mr. Totalmotorcycle". Owner and Founder of Total Motorcycle. Supporting over Motorcyclists and Motorcycling for 21 great years. Total Motorcycle is my pride and joy and being able to reach out 330 million people has been incredible but I could not have done it without the support of my visitors, readers and members, thank you so much! You are making a difference to millions of riders worldwide. Thank you.
Website Facebook Instagram Twitter YouTube LinkedIn

May 20, 2020 Michael Le Pard News Comments Off on RIDE 4 Video Game Schools Riders to Graduate from MotoGP and MXGP to Road Bikes