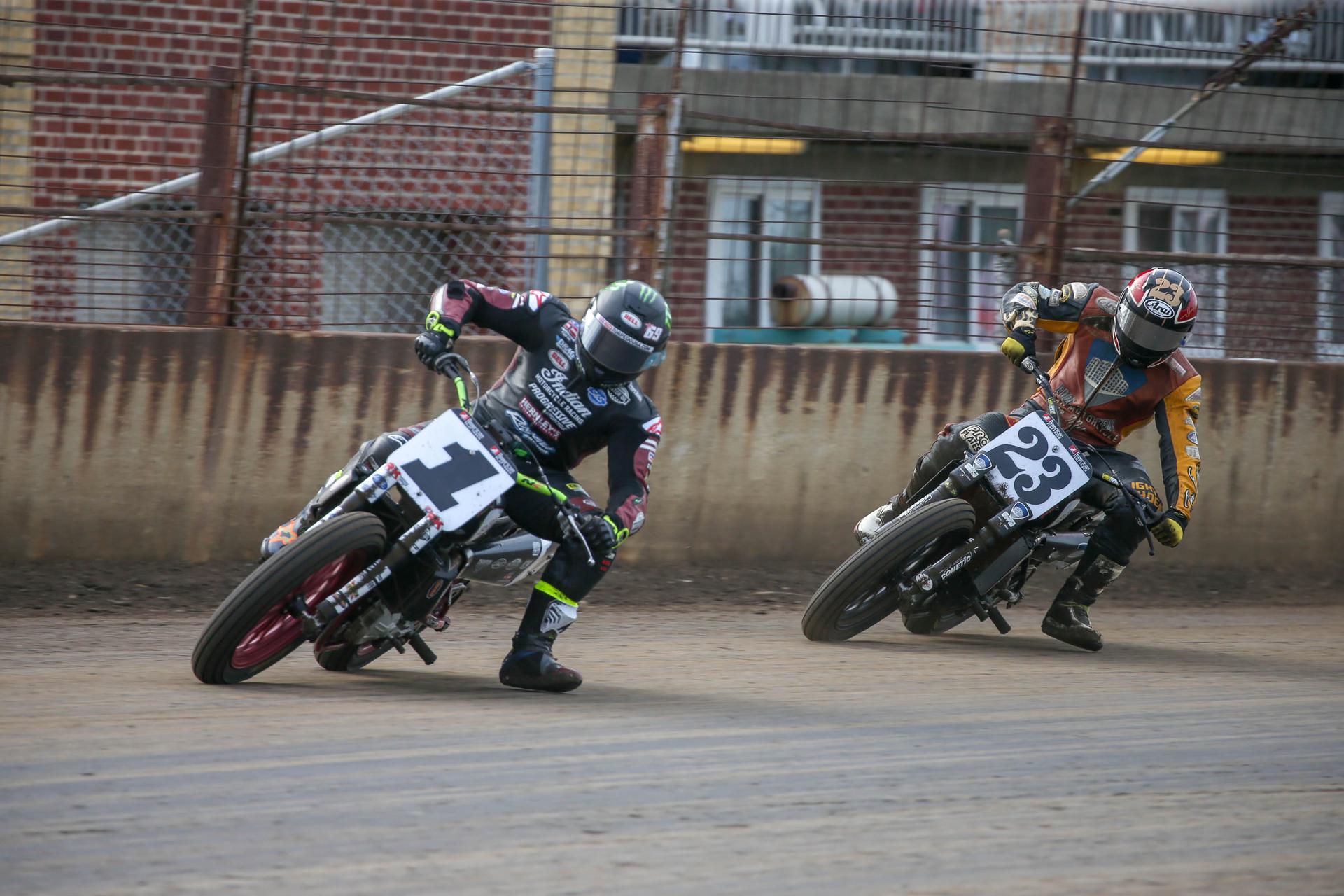 Mees and 2018 Springfield Mile I winner Jeffrey Carver Jr. (No. 23 Roof-Systems of Dallas/Indian of Metro Milwaukee FTR750) transformed the race into a two-rider duel for the win from the start. The pair immediately broke free from the pack, and subsequently waged a 25-mile test of skill and tactics.

Carver seemed content to plant himself on the rear wheel of Mees over the opening half of the AFT Twins Main Event. However, the home-state hero brought the fans lining the grandstands to their feet by driving underneath the defending champ on lap 13.

Mees regrouped and reassumed his position at the front in short order. Carver made two more attempts to wrestle away the lead, and it appeared he finally succeeded for good when he powered by with three laps remaining. However, Mees ducked under Carver entering Turn 3 on the final lap, only to see Carver slide back up the inside as the worked through 4.

Mees was ready for the move, and perfectly positioned himself for the decisive sprint to the flag; he stole the advantage back on exit and held it to the flag by 0.239 seconds.

After the race, Mees said, “I knew going out there if I got the holeshot, I wanted to press the pace right away and create some separation. I think Jeffrey knew exactly what I was doing because he was just pacing me. I looked back a couple times, and right there was the ‘23’.

“He was basically just riding my tail and at one point I rolled out of it and let him go by. I wanted to know where he was stronger, and he had a really good line in 3 and 4. I saw that he tried it a couple times, and he did the exact same thing in the heat. On the last lap, when I felt him dive-bomb the bottom, I had a good counter for his move. I think he blew the corner a little bit coming off of it, and that allowed me to have a big gap out of Turn 4.”

While Mees made up some ground in the title fight as a result of claiming his fifth win this year, it probably wasn’t by quite as much as he may have anticipated when he took the checkered flag.

Championship leader Briar Bauman (No. 14 Indian Motorcycle/Progressive Insurance FTR750) was forced to use a provisional start to advance into the Main Event after suffering a mechanical issue in his Semi.

Despite starting from dead last, Bauman somehow carved his way into seventh by the conclusion of lap 1 and established himself as one of five riders embroiled in a race-long battle for the final spot on the podium. Indeed, Bauman ultimately won that battle, finishing in third 0.122 seconds ahead of brother/teammate Bronson Bauman (No. 37 Indian Motorcycle/Progressive Insurance FTR750).

Gauthier’s arcing high lines may have allowed his rivals to keep him relatively contained during the opening stages of the 15-lap Main Event, but once he finally stretched open enough of an advantage to prevent his opponents from blocking his preferred path, those same lines made him simply unstoppable.

The triumph was not just his second of the weekend, it was also his second in succession in the AFT Production Twins class; he delivered the XG750R a second win in the first possible opportunity after scoring its historic maiden win last time out in the Sacramento Mile.

Gauthier said, “I have to thank Jarod Vanderkooi for telling me to go there (to the high line) after the Semi, so shout out to him. After the second or third lap I went up there and I was like, ‘Yeah, it’s hooking up. So I stayed up there and tried to ride consistent laps and break away and that’s what happened.

“I have to thank everybody at Harley-Davidson, Black Hills Harley-Davidson, Vance & Hines and everyone else who has gotten this bike working this great. It’s been awesome, and I’m having a lot of fun.”

The two actually managed to cut into Gauthier’s lead while waging their duel, which came down to the race’s final corner. Carlile sailed past Cose to open the last lap, but Cose switched-up his opponent driving through Turns 3 and 4. However, the Estenson pilot managed a counter of his own while they streaked down the start/finish straight, nipping Cose by 0.101 seconds at the flag to finish as the race’s runner-up.

Second-ranked Ryan Varnes (No. 68 Varnes Racing/RoyBuilt Kawasaki Ninja 650) continued his consistent AFT Production Twins title campaign with his fifth top-five result of the year by taking fourth. Kevin Stollings (No. 999 Roof Systems/Motion Pro/Hinson Clutches Kawasaki Ninja 650) was just 0.002 seconds back of Varnes to round out the top five.

Catch the feature broadcast of the Springfield weekend on NBCSN with flag-to-flag coverage of the Main Events, enhanced by exclusive features and cutting-edge aerial drone and onboard footage. The broadcast will debut on Sunday, September 8, at 1:30 p.m. ET/10:30 p.m. PT and will re-air on Thursday, September 19, at 1:00 p.m. ET/10:00 a.m. PT.

Honda Racing’s David Johnson took his first Isle of Man TT podium in sensational fashion in today’s Superstock race, getting the better of Michael Dunlop by just 0.2seconds. With the weather finally giving an uninterrupted […]

Unleash a new level The all-new Yamaha YZF-R125 arrived on the scene in January 2019 as the most advanced 125cc Supersport created by Yamaha. This YZF-R125 is instilled with R-World and racing DNA, building on […]

Stage One Victory For Van Beveren At Merzouga Rally

Yamalube Yamaha Rally Team rider Adrien Van Beveren has got his participation in the 2019 Merzouga Rally off to an impressive start, winning the first full stage of the event on his WR450F rally machine. […]