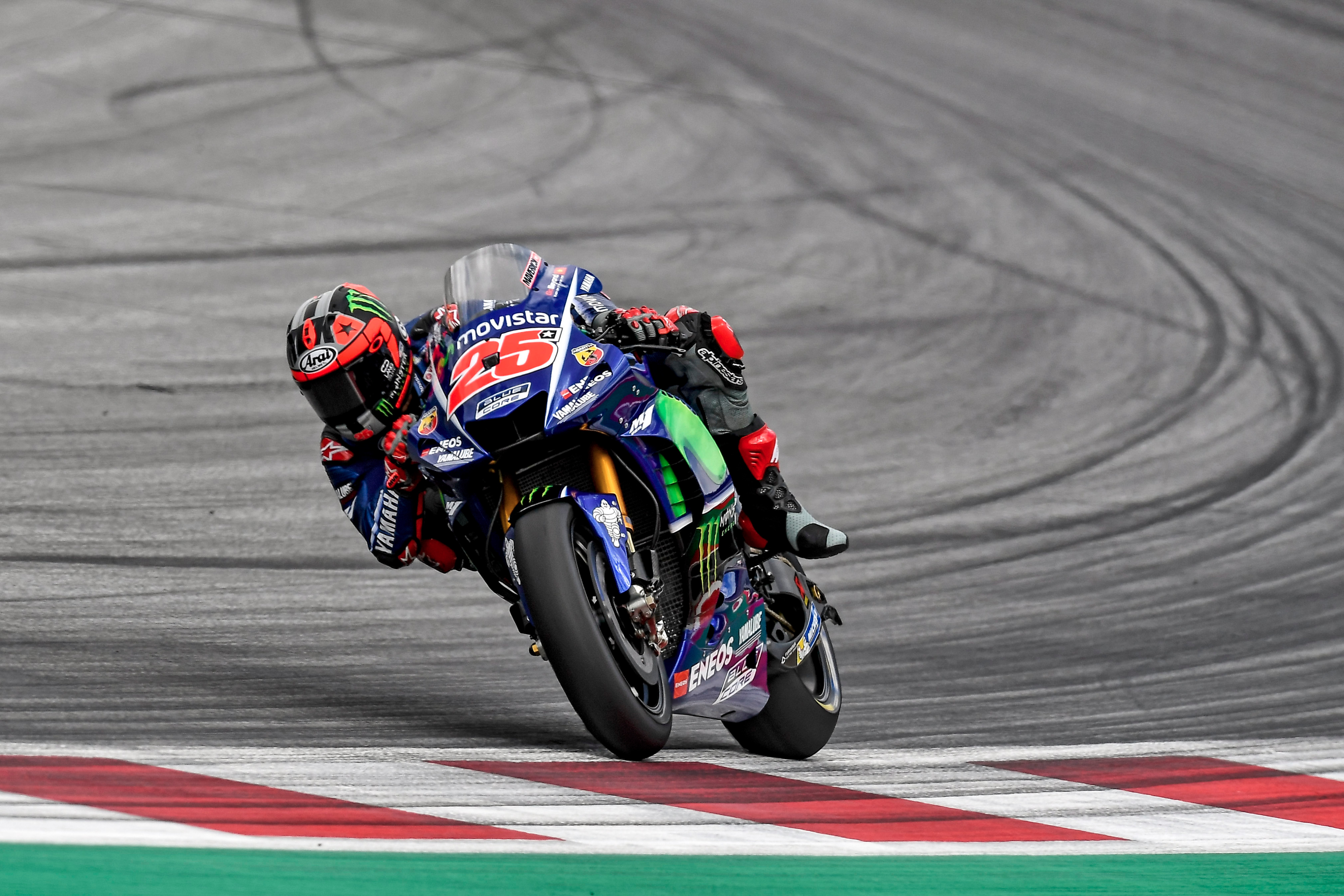 Movistar Yamaha MotoGPs Maverick Viñales and Valentino Rossi had the throttle fully open at the NeroGiardini Motorrad Grand Prix von Österreich, as they contended in a seven-rider fight at the front in the early stages of the race. The teammates lost some time, running wide in turn 1 in separate incidents, but they put their heads down to collect crucial championship points, taking sixth and seventh place respectively.

Viñales had a good start and held on to his fourth place going into the first corner. He briefly made a move on Rossi on lap 3, but couldnt make it stick. He was eager to have another go in turn 1 on the next lap, but ran wide and fell back to seventh place.

The young Spaniard didnt let the small error upset his rhythm and, with 15 laps to go, he was back behind his teammate, ready to join the seven-rider fight for the lead. As Rossi went wide in turn one, Viñales moved up to sixth. On lap 17 the young gun was ready to take on Johann Zarco. He was looking threatening behind the satellite rider for the remainder of the race, but was not able to squeeze his number 25 bike past the Frenchman, and crossed the line in sixth place, 7.447s from the front.

Starting the race from seventh on the grid, Rossi slotted into fifth place storming towards turn 1, and quickly fought his way to fourth past his teammate. He withstood the pressure Viñales put on him in the opening laps, as he chased the leading trio.

The Doctor reached the back of Marc Marquezs bike on lap eight, bringing Zarco with him, but encountered a set-back. A block pass from the fellow Yamaha rider pushed the Italian back to sixth behind the chasing Dani Pedrosa. Running wide in turn 1, with 15 laps to go, Rossi soon fell back behind Viñales to seventh. He was eager to follow his teammate, but was unable to keep up a consistent pace in the high 124s and low 125s, and decided to focus on bringing home his bike in seventh place, 8.995s from first.

Today’s race results see Viñales move back to third in the championship standings, 24 points behind the leader and 9 points ahead of Rossi. The Movistar Yamaha MotoGP Team holds second place in the team rankings, with a 22-point margin to the front. In the Constructor championship, Yamaha holds the top spot. They are on equal points with Honda, each having earned 211 in total and both scored four GP wins, but Yamaha earned one more second place so far this season.

The Movistar Yamaha MotoGP team will have a private test at the Misano World Circuit Marco Simoncelli next week on Sunday, August 20th. After that the team will be back in action in two weeks time for the Octo British Grand Prix at the Silverstone Circuit.

“I suffered from a big drop in grip of the rear tyre for almost the entire race. When I went wide as I was fighting with Valentino, I just tried to calm down, make the tyre work until the end, but it was totally impossible. Not only with other manufacturers, but also with Zarco, it was really difficult to keep following them. We have to work really hard if we want to fight for this championship. I like Silverstone a lot, it is one of the best tracks on the calendar. I always like going there, I really like the lay-out. I will go for the best result possible, trying to be on top.”

“Today the problems started after ten or twelve laps. Unfortunately, we stressed the rear tyre too much, so the rear tyre dropped a lot and we lost a lot of performance and speed. From that moment on it was very difficult to control the bike and I also made a mistake on the brakes. I didnt have the pace in the second half of the race, I suffered too much from a lack of grip. Its a shame because we worked a lot, but it looks like it’s the same problem as we had in Jerez and Barcelona. When we use the rear tyre too much, the bike becomes slower and more difficult to ride in the second half of the race. For sure we have to work a lot mechanically and also on the electronics to improve this problem.”

“We had anticipated that this would be a challenging race, that would be hard on the tyres. We decided to go with the hard rear spec this morning, but in the end this didnt pay off as we had hoped. The start of the race went well: both Maverick and Valentino were able to compete at the front of the field, but after 10 laps they started to suffer from a lack of grip from the rear tyre. It was unfortunate that this cost us some valuable points in the championship challenge, but the riders did well to hold on to sixth and seventh place and bring home the best results possible under these circumstances. The team will work hard to find a solution for the issue before the race at Silverstone, at the private test in Misano next weekend.”

Johann Zarco rocked the Austrian hills and delivered a highly impressive performance to clinch 5th and the top independent honours in the memorable round 11 fight. The French star began the Grand Prix from the rear of the second row and immediately fought in the leading group when it began. He broke the race lap record on the 6th lap and superbly held off a late charge from Maverick Viñales before powering across the finish line to record his sixth top five result in his rookie year.

On the other hand, Jonas Folgers fight came to a premature end after a technical issue forced the rapid German, who is celebrating his 24th birthday today, to pull into the pits and retire on the third lap. Ahead of the race, Folger determinedly eyed up a top six finish and he began from 13th on the grid. The young gun undertook a rocket start and fought through the first laps before his unfortunate retirement.

“It was a good Sunday and Im very happy with what we achieved. This morning, the warm up was difficult for me and I was a bit worried about how things would be in the race. Yet, this afternoon, the temperature was high and it was the warmest that it has been throughout the weekend and so the soft compound was the best tyre option. However, it had a great feeling but we were still a bit unsure about what would happen in the GP. Anyway, I am pleased about the start and I was able to fight in the first lap. Then I felt really strong after the fifth lap but it was too tricky to overtake. When I claimed 5th position, the tyres dropped a bit so I tried to manage it. I wanted to catch Lorenzo in 4th however, it was not possible today, and at the same time, I wanted to keep hold of 5th because Viñales was behind me and he was pushing. In the end, it was a perfect finish and I am so happy to be back in the top five. This result is great for the championship as well as my confidence and battling with the leading guys is very exciting.”

“I have to admit that it was a really hard weekend for us and there were many ups and downs. We tried a new chassis but we were unsure if it was better or not at this circuit, and I think in the end I was not getting confident with the track. However, I felt good in the warm up, even if my position was quite low because I was using old tyres. Plus, my qualifying performance was not so bad if we look at the lap time. Therefore, I was feeling confident for the race, but then we experienced a technical issue and I had to retire. This is a shame because I think that we could have done a great job and taken some valuable championship points. Now, we have to analyse what happened so that it wont occur again.”

“It was an incredible battle at the front of the field and the Monster Yamaha Tech3 team is proud to have been part of that fight until half way through the race. Johann did an incredible job and got past both Yamaha riders, even though it was tough, and he also broke the race lap record. Maverick and Valentino were both using the hard compound tyres and our rider was running with the soft so I thought that the second part of the GP could have been challenging, but Johann did incredibly well to preserve his tyres and keep both of them behind him. He was the best independent rider by far and also the leading rookie by even more of a distance. We are pleased with a top five finish and he completed the weekend as the first Yamaha which means that we have gained 11 points for the constructors’ championship which will help Yamaha. I am proud of what Johann did today because it was tough and the pressure from Maverick and Valentino was so intense. As for Jonas, I feel very sorry for him. After the big disappointment in the Czech Republic, the weekend was a bit more difficult for him here but he had a great start and I think he would have been inside the top 8. Unfortunately, he encountered a brake issue, which was really strange. We are working with Brembo at the moment to work out what happened because this has never occurred before. Today is Jonas birthday and we were hoping that he could have scored a good result to celebrate his day, but sadly, this didnt happen which is a big shame. We know that he is on form and I want to wish him a happy birthday and I hope hes going to forget this disappointment quickly. Silverstone is coming so let’s hope that our two guys will be fighting for top positions there. Thanks to the whole team because it was a tough way to restart the championship after the summer break but now we have a few days to relax so that we can come back stronger.”

The Movistar Yamaha MotoGP Team are celebrating at the Phillip Island Grand Prix Circuit today, as they have returned to the top step of the podium with Maverick Viñales taking a stunning win. Valentino Rossi […]