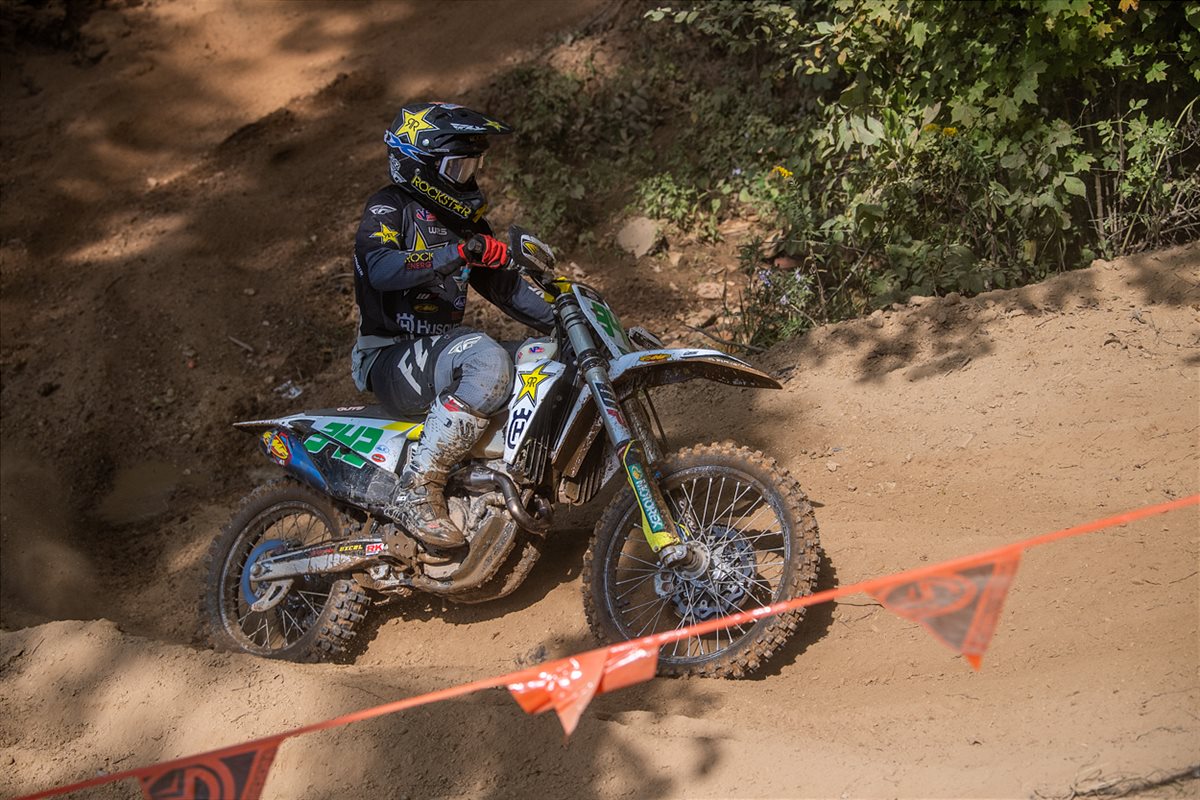 Rockstar Energy Husqvarna Factory Racing Team’s Craig DeLong secured a third-place podium finish in the highly-competitive XC2 250 Pro class on Sunday with a solid come-from-behind performance at Round 10 of the Grand National Cross Country (GNCC) Series in Millfield, Ohio.
As the green flag waived for the start, DeLong got off to a good jump but he was quickly funneled to the back of the pack after bumping into another rider’s wheel in the second turn. He fought his way through the dusty opening lap to bring himself up to sixth after getting started outside the top-10. It took him about three laps to reach the podium battle and from there he put on a charge to close the gap on the front-runners ahead. With second-place in sight, DeLong had to make a final stop for fuel, which allowed his competitors to gain valuable time late in the race. Despite a hard-fought effort, DeLong wasn’t able to make up the deficit before the checkers and he brought it home for third.
“I got a decent jump off the start but I just wasn’t aggressive enough and I got shuffled back in the first couple corners, forcing myself to have to play catch up again,” DeLong said. “I was able to reel in second but I had to stop for gas and I kind of lost my flow and wasn’t able to make up any time up on first or second again. I’m disappointed in today and I’ll work on some things to be ready for the next one.”
Next Event: Round 11 – Mason-Dixon GNCC – October 11, 2020
Burr Oak GNCC Results
XC2 250 Pro Class Results
1. Jonathan Girroir (KTM)
2. Mike Witkowski (YAM)
3. Craig DeLong – Rockstar Energy Factory Racing Team
XC2 250 Pro Championship Standings
1. Jonathan Girroir – 254 points
2. Craig DeLong, Rockstar Energy Factory Racing Team – 245 points
3. Mike Witkowski – 234 points
About Michael Le Pard 4929 Articles
"Mr. Totalmotorcycle". Owner and Founder of Total Motorcycle. Supporting over Motorcyclists and Motorcycling for 21 great years. Total Motorcycle is my pride and joy and being able to reach out 330 million people has been incredible but I could not have done it without the support of my visitors, readers and members, thank you so much! You are making a difference to millions of riders worldwide. Thank you.
Website Facebook Instagram Twitter YouTube LinkedIn