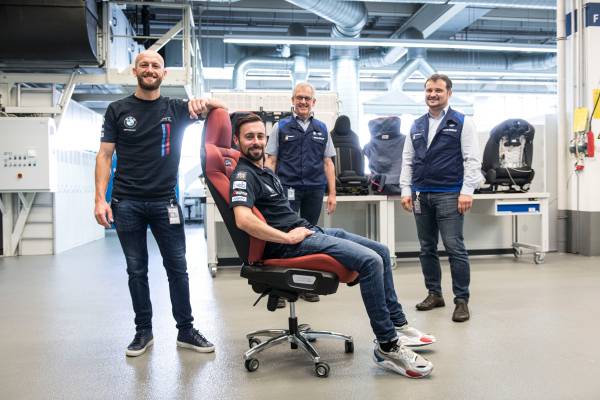 Munich. The two riders in the BMW Motorrad WorldSBK Team, Tom Sykes (GBR) and Eugene Laverty (IRL), naturally spend a lot of time in the saddle of their BMW S 1000 RR. However, during tests and at race weekends in the FIM Superbike World Championship (WorldSBK), they also spend a lot of time sitting with their team in the garage between and during sessions. These meetings play an important role in development and set-up work. Sykes and Laverty must no longer forego the kind of comfort of their BMW M cars they have become accustomed to. Instead of standard chairs, they now have original BMW M sport seats in their pit areas – 100% made in Munich (GER) for use at racetracks in WorldSBK.

The two seats used by Sykes and Laverty are optional equipment for the BMW M4 Competition, with high-class Merino leather covers. They weigh roughly 30 kilograms each. They were converted into chairs in the BMW Research Centre in Munich, by Alois Widbiller, Head of System Integration Seats, and his team.

“We regularly make specials like this, so we suggested that we could also build special seats for the BMW Motorrad WorldSBK Team. We had great fun with the project,” explained Widbiller. It took him and his team roughly 60 working hours to convert the special model for the BMW M4 Competition into a garage seat.

The task was to make a chair on rollers from a seat usually installed in a car. “That is really complex, as you cannot simply mount the seat on castors,” Widbiller explained. “For example, we had to design and produce special connecting pieces. They included an adapter, which we screw into the seat to form the connection with the rolling base. In the case of the rolling base, it was important to us that it sat nice and low to give both riders the most comfortable seating position possible. And the two chairs have obviously also been given a plaque with the words ‘BMW Motorrad WorldSBK Team’. It is located where the inside of the seat would be in a car. We had space there, and designed a special cover, on which we could mount the plaque.”

Sykes and Laverty were presented with their new chairs by Dr. Markus Schramm. The Head of BMW Motorrad took the opportunity to wish them and the team a successful restart to the 2020 WorldSBK season. The two riders also used a trip to Munich to visit the BMW research centre, where they gained an impression of the prototype seats workshop and met Widbiller and his team. “It was very interesting for them to come to the place where parts are made for the cars. They don’t usually get to see areas like that,” said Widbiller. “It was excellent to welcome the two guys, and we obviously have our fingers crossed for a successful remainder of the season.”

“People often underestimate how much time our riders actually spend sitting in the garage,” confirmed BMW Motorrad Motorsport Director Marc Bongers. “This is particularly true during practice sessions. Before they take to the track, they prepare for their outings. Between runs they return to the garage and, while the crew works on the bike, the riders chat to their crew chiefs and engineers and give feedback on the bike. After all the sessions, including qualifying and the race, they head straight to the debrief with the team, in which all the details of how the bike responded in individual sections of the track are discussed and sector times are analysed. All that forms the basis for our set-up work during a race weekend. And the riders obviously also spend the final few minutes before they take to the grid in their garage, where they enter their final phase of concentration.” Thanks to their new BMW M chairs, they can now do this in ultimate comfort.

5th Invitational WHY WE RIDE to The Quail charity motorcycle trek

April 25, 2019 Michael Le Pard Events, News Comments Off on 5th Invitational WHY WE RIDE to The Quail charity motorcycle trek

August 16, 2018 Michael Le Pard News Comments Off on PABLO QUINTANILLA INSIDE THE TOP SIX ON THE ATACAMA RALLY’S LONGEST STAGE

Reaching the end of a gruelling stage two at this year’s Atacama Rally, Pablo Quintanilla is currently second in the event’s provisional overall standings. Wrapping up the rally’s longest stage with a strong sixth place […]