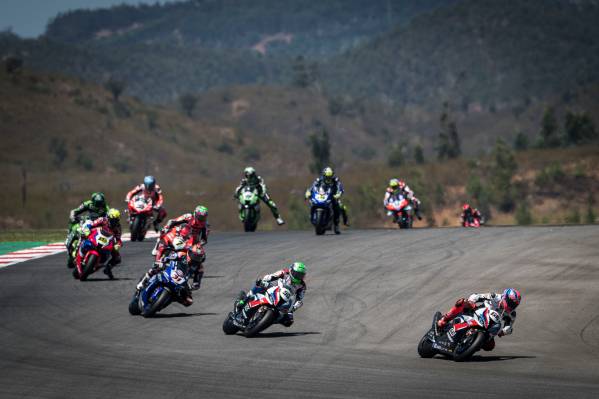 Portimão. Just one week after the race weekend at Jerez de la Frontera (ESP), the BMW Motorrad WorldSBK Team is now competing with the BMW S 1000 RR at Portimão, Portugal. The ‘Autódromo Internacional do Algarve’ is hosting the third round of the 2020 FIM Superbike World Championship (WorldSBK). In Saturday’s race, Tom Sykes (GBR) and Eugene Laverty (IRL) both reached the top ten, finishing in eighth and tenth positions.

Sykes just missed out on a front row spot as he finished fourth in Superpole qualification on Saturday morning. His team-mate Laverty struggled with a technical issue during the morning practice session. However, the team managed to get his bike ready for action in time for Superpole. Laverty secured ninth position on the grid.

The air temperature rose to 30 degrees Celsius during the race, while the track temperature of 44 degrees was a little cooler than the previous week in Spain. Sykes did not make an ideal start and fell back to ninth place. Laverty was right behind him in tenth. Both were able to maintain a fast pace throughout the race and stayed in touch with the front runners. In the final stage of the race, Sykes closed in on the group battling for fifth place but he had no opportunity to overtake. Sykes finished eighth after 20 laps, three seconds behind the podium positions. Laverty crossed the line in tenth place shortly afterwards.

Quotes after race one at Portimão.

Marc Bongers, BMW Motorrad Motorsport Director: “After unsatisfactory results at Jerez, we worked hard throughout the week, installing new parts and focusing on race performance. Yesterday, we were able to improve when testing over long distances and noticed that we are well positioned. Unfortunately, we had a small engine defect in this morning’s free practice – no engine damage so we can repair it. There was an oil leak which we will take a closer look at later. The team then did an outstanding job in preparing the motorcycle as it was before practice within an hour, including replacing the engine. Positions four and nine in Superpole were okay. You can see that Eugene is slowly getting on it. In the race, we unfortunately lost a few positions at the start, with Tom five positions in the first four corners. After that we were able to keep up with the group and over the race distance, our lap times have remained almost ‘atypically stable’ under these conditions. Unfortunately, we still have deficits in engine performance, which means that we can’t get past the other riders during the race. We would definitely have a chance, but we lose a few tenths per lap due to the engine and as a result we have almost no chance in the fight for positions. Our conclusion on the first day of racing was that it was definitely a huge improvement compared to Jerez, but we have to keep working hard to catch up with the leaders under these conditions. We will analyse the data now. Hopefully we can get off to a better start tomorrow. If both riders could slip from the top ten into the top eight, I would be happy for this weekend.”

Shaun Muir, Team Principal BMW Motorrad WorldSBK Team: “I am pretty happy with this morning’s practice and Superpole. We got second and third row on the grid. There was potentially a little bit more left with both riders but we got be happy with the grid positions for race one. Overall we are satisfied with race one but at the same time there is a fair degree of frustration in there because we know what we are missing and once we have what we are missing, which is a little bit more of horsepower then clearly that regular podium is in sight. And that’s what’s holding us up in the moment. Both riders brought the bike home in solid positions but at the same time it’s what could have been and what can be. That sums up the race for our riders. They did not really put a step wrong. Tom was in the group that was battling for the third podium place until the latter part of the race. The results do not tell the efforts that is going into to get those results and sadly we have just fallen short of that podium place. It takes some more horsepower to propel us forward into that leading group and make passing more possible.”

Tom Sykes: “To get P4 in qualifying today, I was a little disappointed, but realistically it was not a bad thing. Initially we had a good start, but as soon as I selected 2nd and 3rd gear into T1 we lost multiple track positions. We are still giving away some deficit in terms of horsepower, but if you look at sectors two and three, we are extracting good performance from the chassis on the BMW S 1000 RR. The only downside to the race was the fact that I had to ride the bike differently. I felt in the corner entry and in mid corners that I was being held up, which is fine, however it doesn’t allow me to carry the speed onto the straights as I am not able to sling shot out of the exits. I believe If we had the same engine performance as some of the competition we could have had great potential in that race.”

Eugene Laverty: “The team in the garage worked really hard today due to the engine problem in the morning. There was actually a big question mark if we even could get into Superpole, so a big thanks to the team – the guys worked full gas, it was very close, but they made it in time. So the Superpole result today was the main thing after this morning and I was fine with it. Afterwards the race itself was hard, but okay for me. I lost a few positions at the start, had a good race in the middle, but lost the gap in the group in front. Tomorrow I will try to do another step and try to get the maximum out.”

Rockstar Energy Husqvarna Factory Racing’s Pablo Quintanilla and Luciano Benavides will today take to the start of the 2021 Dakar Rally. The South American duo have completed their Shakedown tests and all administrative checks and […]