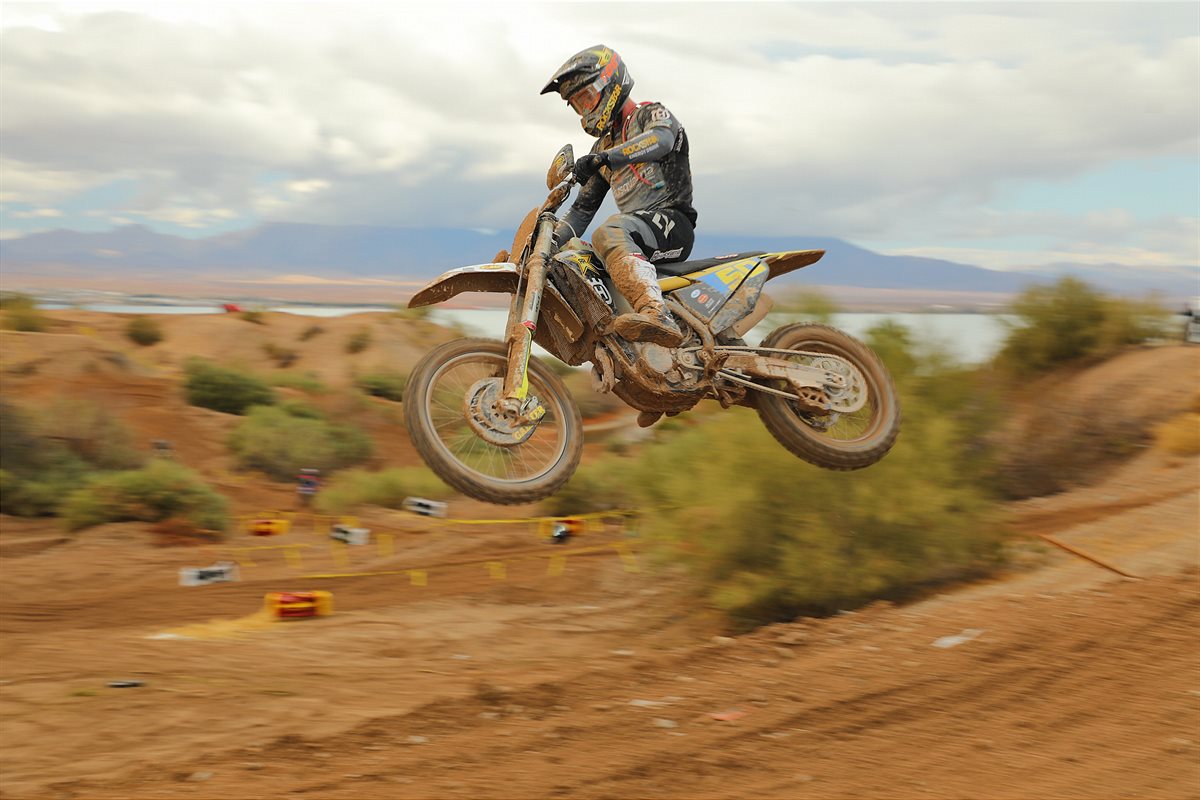 Rockstar Energy Husqvarna Factory Racing’s Austin Walton had a solid start to the 2021 World Off-Road Championship Series (WORCS) on Sunday, finishing just off the Pro 450 class podium with a hard-fought fourth-place in Havasu, Arizona.
The season opener proved to be a challenging one with course conditions on the rougher side due to rainfall throughout the weekend but Walton came prepared with an optimum setup aboard his FX 450. Getting off to a top-10 start, Walton charged his way up to a top-five position by lap eight and he set his sights on the fourth-place battle ahead. At the halfway mark, Walton made his move to overtake fourth and from there he maintained a steady pace to finish just off the Pro 450 podium in fourth.
Walton: “It was definitely a challenge today. I had a couple little spills just coming in a little too hot and getting a little too lazy coming into the corners. That track is very demanding but my suspension was awesome. I made a last minute decision before this race today and I was very happy with it. It was a grueling race but I’m happy to be walking away safe and done with the first round.”
Privateer Justin Hoeft put forth an impressive performance in the Pro 450 class to come away with an impressive third-place podium finish at the season opener.
Next Round: Blythe, California – February 19-21, 2021
Pro (MC) Round 1 Results
1. Dante Oliveira (KTM)
2. Taylor Robert (KTM)
3. Justin Hoeft (HQV)
4. Austin Walton (HQV)
About Michael Le Pard 7738 Articles
"Mr. Totalmotorcycle". Owner and Founder of Total Motorcycle. Supporting over Motorcyclists and Motorcycling for 23 great years. Total Motorcycle is my pride and joy and being able to reach out 375 million people has been incredible but I could not have done it without the support of my visitors, readers and members, thank you so much! You are making a difference to millions of riders worldwide. Thank you.
Website Facebook Instagram Twitter YouTube LinkedIn

Match Point to Mahias in WorldSSP at Jerez

October 18, 2017 Michael Le Pard News Comments Off on Match Point to Mahias in WorldSSP at Jerez

GRT Yamaha Official WorldSSP Team’s Lucas Mahias arrives at the penultimate round of the 2017 FIM Supersport World Championship in Jerez this weekend with a chance of being crowned champion. The 28-year-old French rider leads […]

Gettysburg, PA (June 1, 2020) – For the first time in its 19-year history, Gettysburg Bike Week will not hold its annual gathering. One of the premiere motorcycle rallies in the country, the event normally takes place at the […]

The Incredible Last Chapter of our Escape from Cuba. They say a photo is worth a 1000 words, and I think this unbelievable photo from my passenger seat aboard Sunwing flight WG200D says it all. […]