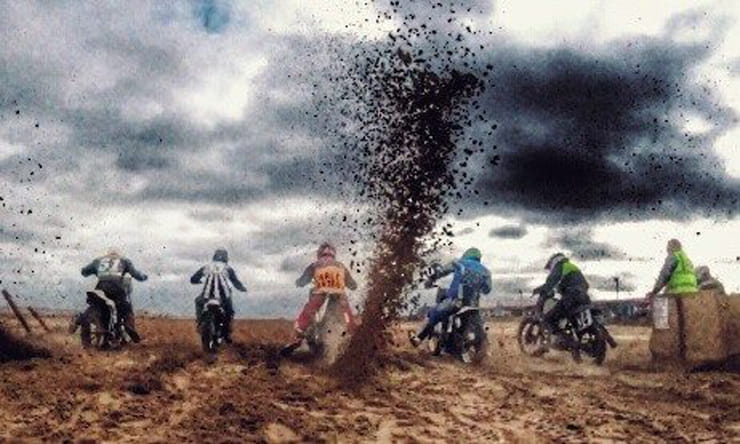 The front wheel is nudging the start line marker tape. I’m already knackered just from pushing and pulling the stripped down Harley Street Rod in and out of the sand ruts. I’ve dug my toes into the sand and am wondering if sitting in or on the rut will give me anymore grip on the launch.

I visualise my line across the deeply rutted and churned up beach. Mentally I’m already at turn one, which is the other side of a wide (and deep) expanse of cold, salty water. Turn in point is where the sea was half an hour ago when the tide was in, apex is marked by what appears to be seaweed.

Green flag; the riders gun their engines. My eyes are on the starter tape, but the more experienced riders watch the hand of the marshal that pulls the tape.

His hand moves and the bikes blast through the tape. I have the Harley in second gear with the throttle half open as I drop the clutch. Four bikes are already carving across my perfect line, their 50mph jetski-like rooster tails of wet sand blasting me in the face. All I can see is… ok I can’t see anything.  The engine is redlining and the bike is ploughing, not skimming like the others. Deep ruts kick the back left and right. I hang on and look into the distance. The bikes ahead hit the pool and the sand roosters become a tidal wave in my face. Turn one here we come. I turn the bike in and the knobbly-look road tyre struggles for grip. The back comes around and only my steel shoe is holding the bike up.

My boot digs in and I’m nearly pulled off the bike. Turn one survived, gun the motor and see if I can make turn two. 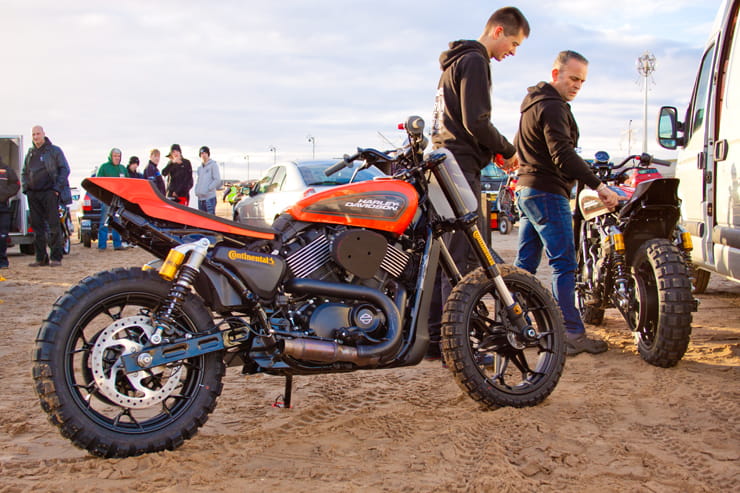 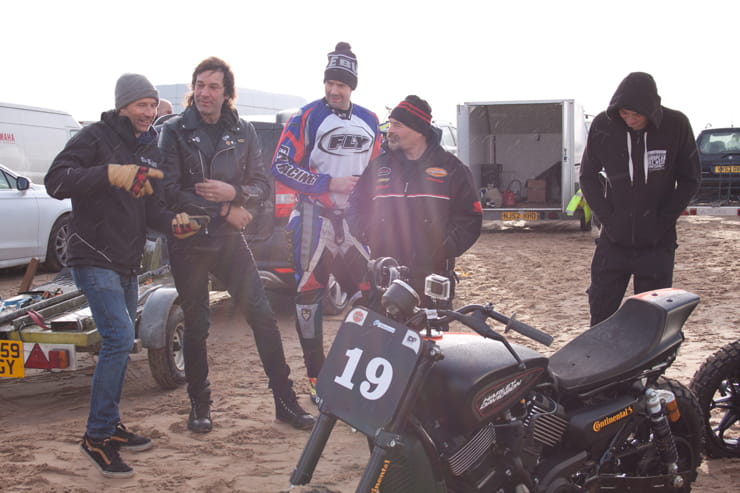 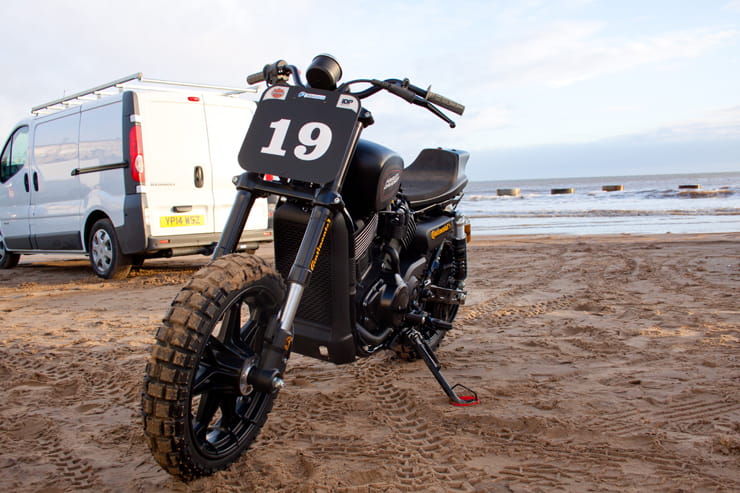 Mablethorpe Sand Racing Club having been competing on the Lincolnshire beach for nearly 30 years. They race every other Sunday from late-October to March. The race entry fee funds public liability insurance and the public turn up in the hundreds to view the spectacle. Not even adverse weather prevents a great turn out. Think of it like Mad Max meets Wacky Racers meets Ben-Hur.

Racing ends when your bike breaks down, your body breaks down or the tide comes in – whichever comes first. 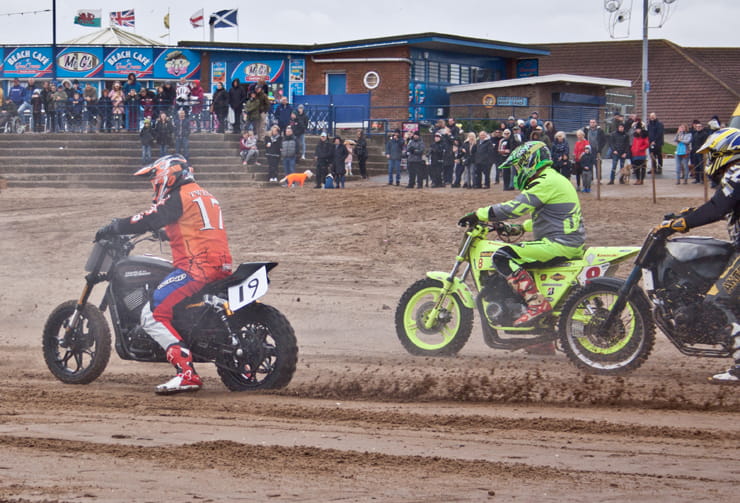 The day after the race the club secretary called me to ask me if I had enjoyed my day and asked if I would be coming back. I wonder if Dorna do the same after MotoGP. They are keen to get new riders involved and genuinely welcome all.

Sign on is in the beach café and standing in the queue the conversation was friendly and the talk was all bikes. The breadth of machinery is amazing, from speedway and grass-track machines, through to motocross bikes and a huge range of converted roadsters.

I’d been looking at the Harley Street Rod that BikeSocial has on long term test, wondering how long it would take to strip and rebuild it. Turned out that H-D UK have had the same idea and are building a fleet of converted Street Rods for dirt track racing via their partnership with the Dirtquake event. A quick call persuaded them that Mablethorpe would make a great shakedown for the project. Not only did they send two bikes but they sent my very own “factory” team to look after me.

Harley have a fleet of 15 Street Rod 750’s. The bikes are road bikes that are in development. IDP Moto upgrade the standard bike and, once developed, the components will be offered as a kit. When the kit is ready you can have a street version with an LED headlight and number plate. The tracker will have these removed and will not have the front brake. The inspiration comes from the original factory flat track prototype. 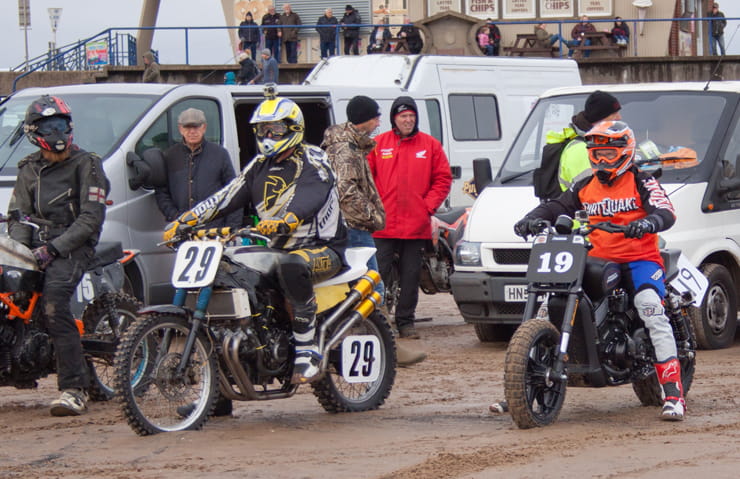 Modifications so far include:

Still to be done: 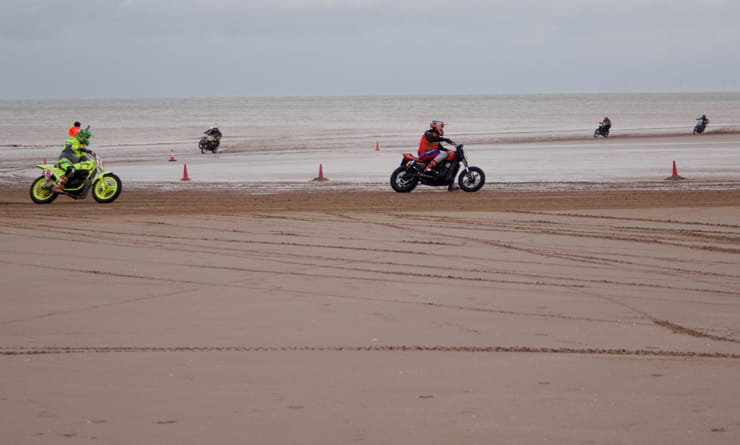 As the bikes are in development and still set up as flat trackers, I was to be the sand racing test pilot and we all learned a few things. The first comments were that the bikes were too good to be riding on the beach, swiftly followed by the front wheel needed to be bigger with a narrow width MX tyre for traction when you turn in. The best combination is 21inch front and 18 inch back.

I wasn’t too concerned as I didn’t know any better – just happy to be there. Launching off the line I was only aware of the faster riders ahead of me. It was only later when I saw the photos that I realised that I wasn’t last. 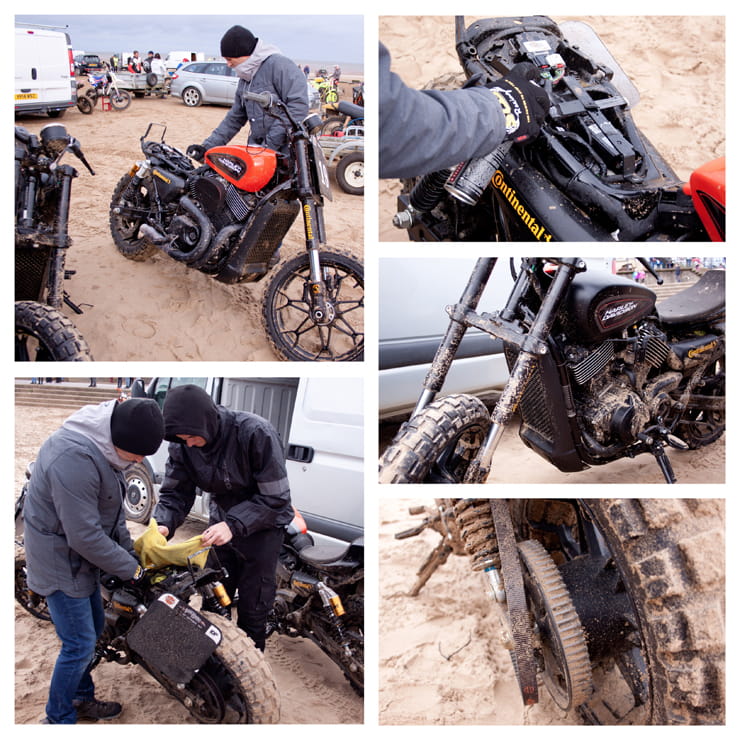 The Harleys have seen some action on the flat track and they have already made modifications based on the experience they have had so far. Number one of those will be to change the belt to chain drives before Snow Quake. They say that chain will perform better in the extreme temperature than belts which may become brittle.

On the beach, the sand that builds up filters through the sprockets with chain drive. With a belt on the beach the sand builds up under the belt and it comes off the rear hub. Made worse because riding through sea water also binds the sand too.

The belt came off twice both in turn-one. The first time it came off on the right side of the hub which locked the back wheel. I thought I had just over cooked my lean angle and the back had got away from me. The second time it came off the left side of the hub, this was unfortunate. When I rolled off expecting engine braking, there was none and I ran wide just as another rider turned in across my nose. I couldn’t help but use him as a brake. Sorry. He was very gracious, simply saying “that’s racing”. 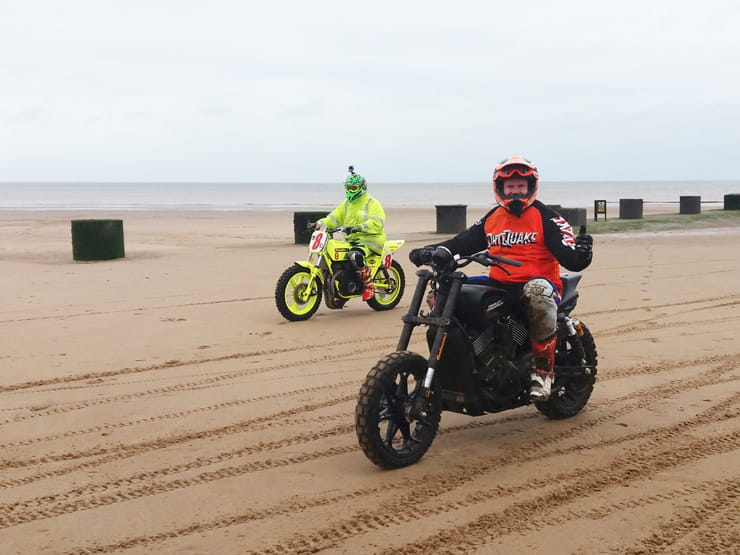 Since the race I’ve been tagged in some great photos on social media and had some fun messages from riders and spectators. It’s a social club with great people. The last time they’d seen someone wrestle with such an inappropriate bike on road tyres was when Guy Martin turned up. Guy went back a second time with a better set up and did much better. This means I have to go back.

Three weeks on I am still finding sand in places it shouldn’t be. Bikes need to be jet washed the same day and then pretty much dipped in WD40 or equivalent. I am currently scanning the classifieds and looking forward to riding and developing my own Mad Max machine and seeing the new friends that I made at the club again.

Special thanks to Bennetts Insurance and Bike Source for bringing today’s Rider Inspiration Story to our readers! We wish them the very best of success at Mablethorpe 2020!

Munich/Stuttgart. Right on time for the nationwide start of the season on 17 March 2018, BMW Motorrad was once again pleased to receive numerous distinctions at the annual readers’ vote held by the magazine MOTORRAD. BMW […]