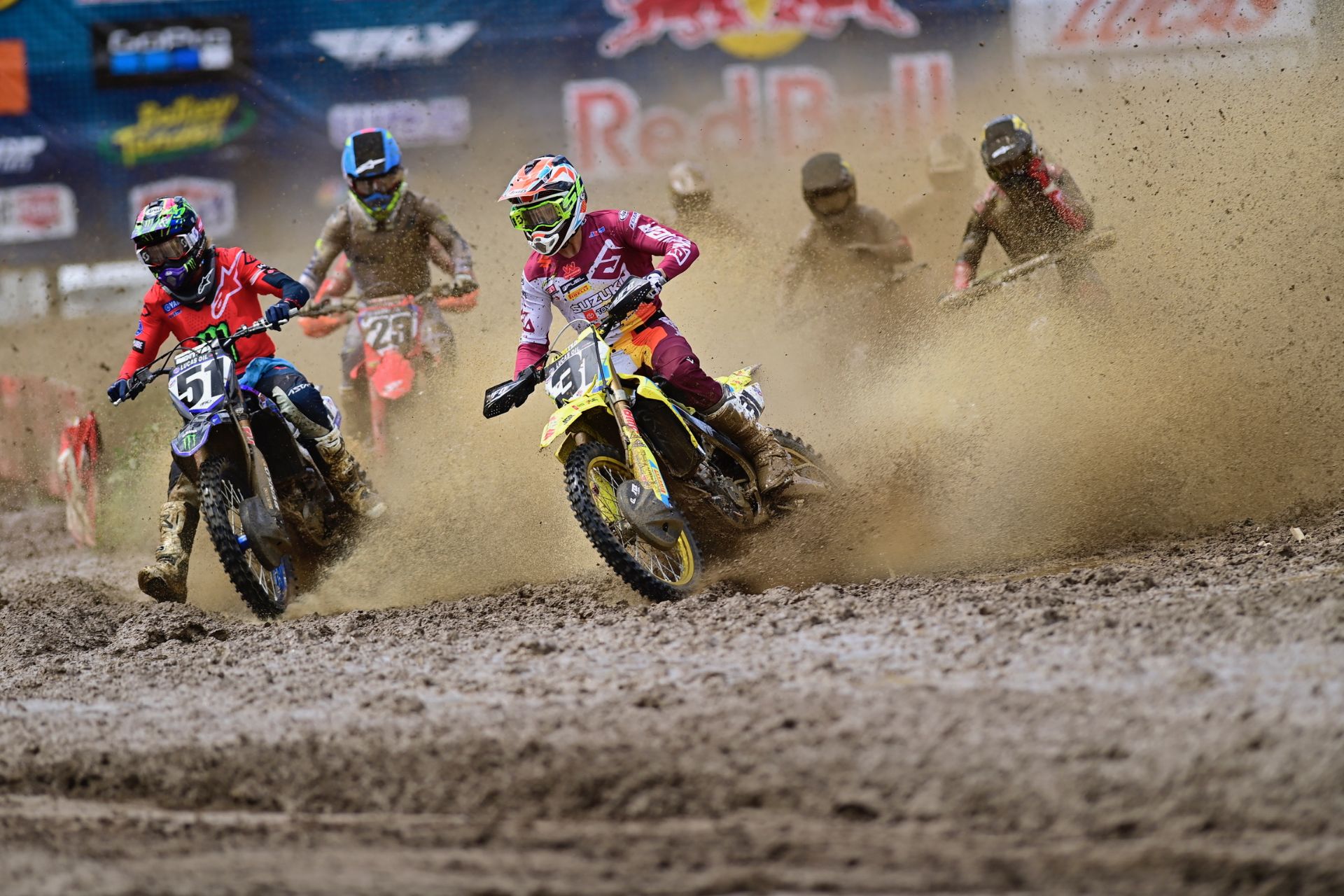 Monster Energy Yamaha Factory Racing Team’s Justin Barcia and Broc Tickle recorded a superb 1-2 finish in the first 450MX moto at the second round of the Lucas Oil Pro Motocross Championship at Loretta Lynn’s Ranch. In the second moto, Tickle scored a ninth-place finish to end the day fourth overall, and unfortunately, Barcia was unable to finish, resulting in seventh overall.

In only his second race with the team, Tickle made a lot of progress. After qualifying 14th on Saturday, he made a strong getaway, storming to third by the end of the first lap behind Barcia. Running a smart race, he advanced to second to join his teammate on the podium. In the second moto, Tickle struggled at the gate drop and was down in 15th, but managed to put his head down and battled his way back up the field to finish ninth for a solid fourth overall.

After a strong qualifying in third place, Barcia came out swinging in the first moto with the holeshot. After a short battle for the lead, he solidified his place at the top of the field and completely checked out, building a gap as large as 59 seconds over second-placed Tickle by the halfway stage. Barcia controlled his pace with ease and took the flag comfortably to record his first moto win since the 2018 Ironman National.

The second moto was a tough ride for the Florida rider. Barcia worked his way to fifth before a tip over that dropped him to the back of the field as he pulled in for a goggle swap. He mounted a solid comeback lap after lap to reach 15th, but unfortunately, the conditions took their toll and Barcia was unable to complete the moto. With a strong win in the bag, Barcia ended the second round in seventh overall with a 1-32 tally, giving him third place in the championship standings.

Monster Energy Yamaha Factory Racing Team returns to the dirt at the Ironman in Crawfordsville, Indiana, next Saturday, August 29, for Round 3 of the Lucas Oil Pro Motocross Championship.

“Today was a little bit of a roller coaster here at Loretta Lynn’s with a heavy mud race. There was lots of rain overnight and during the day. It started out great with Justin getting the holeshot in Moto 1 and went on to lead every lap for the win. Broc finished second, so a 1-2 for the Monster Energy Factory Yamaha Racing Team was a high point.

“In the second moto, Justin got out to about fifth place and we immediately found we had a problem. He tried to manage it throughout the race, but ultimately it ended up in a DNF. Broc on the other hand finished ninth and just missed the podium. It was a strong finish in just his second race with the team. Overall, it was a great performance by both riders, and we showed what we could, unfortunately, the DNF really cost us. We’re going to regroup from that and come back to Ironman next weekend and go for another 1-2 finish.”

“Loretta Lynn’s II was a huge step in the right direction for myself. The track conditions were really, really gnarly. The conditions in the second moto got a little better, but it was tough out there in both motos. I’m stoked with the progress we made throughout the day and during the week with the team. I’m getting more comfortable on the bike and learning what I like about it and what I need to do to make it more comfortable for myself. I trust everybody that I’m working with on the team. I think that’s awesome to have the same goals and the same desire to keep pushing forward. I’m looking forward to Ironman as well. I’ve had decent results there in the past.

“This weekend was awesome. It’s going to be good to build off of it. I’m hoping for dry conditions, but if not we’ll make the best out of the wet conditions. The goal from here on out is to show up and be the best we can each time we hit the track.”

“We had a great day going. I got the holeshot in the first moto and checked out to over a minute lead at one point. I won the race by a lot. It was a really good race. I felt awesome and everything was working well. The track conditions were brutal, it was super difficult. In the second moto, I had a little crash so I had to pull in and get some fresh goggles. I was putting on a good charge until we had an issue with the bike which was definitely a bummer. We won and then had a DNF. We need to work on that to give ourselves a better opportunity for the championship fight. I’m definitely looking forward to next week in Indiana.”

About Michael Le Pard 4699 Articles
"Mr. Totalmotorcycle". Owner and Founder of Total Motorcycle. Supporting over Motorcyclists and Motorcycling for 21 great years. Total Motorcycle is my pride and joy and being able to reach out 330 million people has been incredible but I could not have done it without the support of my visitors, readers and members, thank you so much! You are making a difference to millions of riders worldwide. Thank you.
Website Facebook Instagram Twitter YouTube LinkedIn

Mahias in the Mood for Donington Park

May 24, 2018 Michael Le Pard News Comments Off on Mahias in the Mood for Donington Park

The GRT Yamaha Official WorldSSP Team are determined to hit the ground running at Donington Park for Round 6 of the 2018 FIM Supersport World Championship this weekend. Reigning WorldSSP Champion, Lucas Mahias, is aiming […]