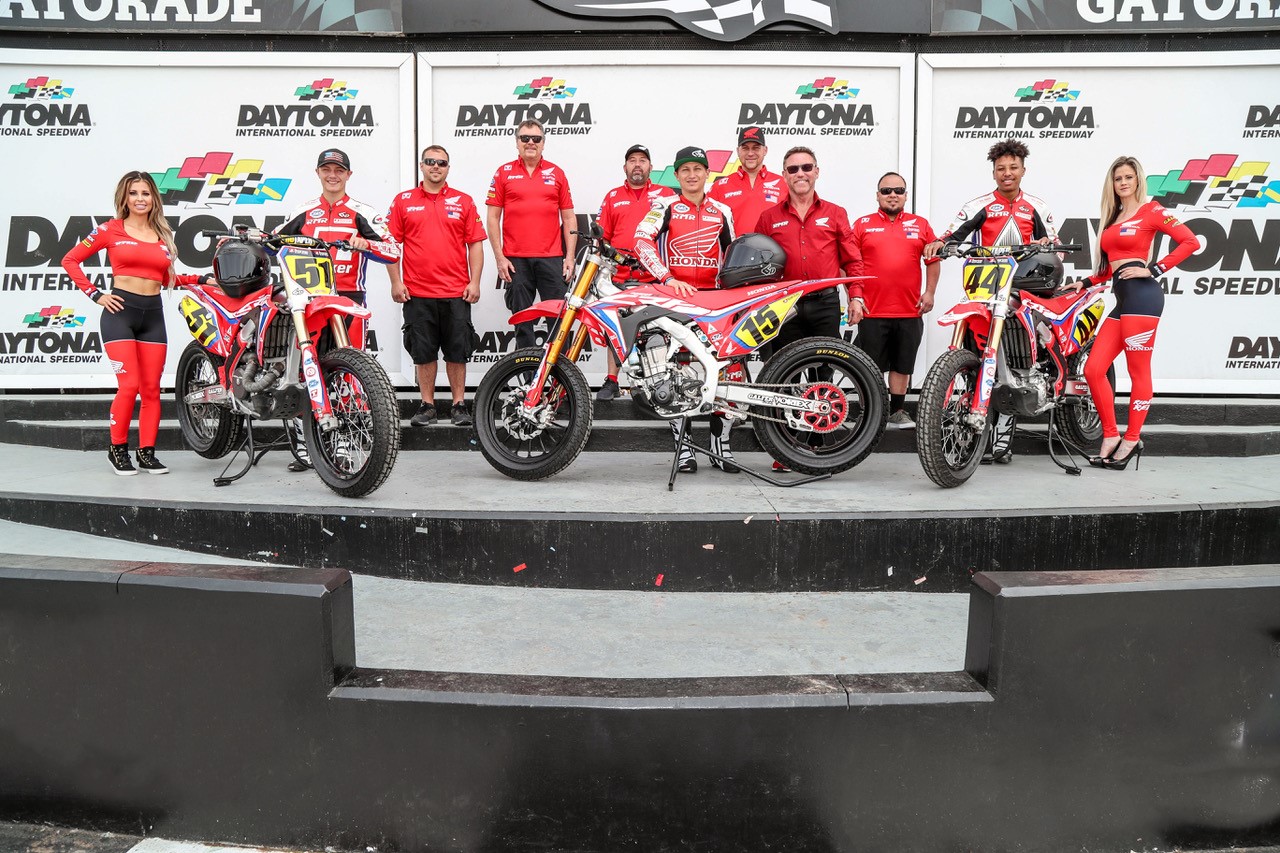 “Cole is a great young rider, along with gratefulness and the willingness to work hard,” said Al Lamb, Owner of Al Lamb’s Dallas Honda. “Team players turn into champions and that’s what we are looking for. Everyone at Al Lamb’s Dallas Honda are delighted with the team we’ve assembled this year. It is also great to be a part of the RMR-Mickey Rush partnership with American Honda. It’s a good feeling to have “Big Red” back in the AFT paddock after so many years.”

“Having a team like Richie Morris Racing/Al Lamb’s Dallas Honda behind me is an incredible feeling,” said Zabala. “I couldn’t be more excited for this season to get started. Now that I’ve been made a part of the RMR team, I plan to work hard and use the valuable knowledge and resources of this strong team to get results. I want to thank the whole RMR/Al Lamb’s Dallas Honda team for believing in me and giving me this opportunity to show what I can really do. I can’t wait for the season to get underway.”

The trio of RMR riders will pilot a fleet of expertly-tuned Honda CRF450Rs. Zabala and Smith riding the RMR Al Lamb Dallas Hondas. While Mikey Rush will be riding the RMR Honda backed by American Honda.

Both S&S Cycle and Roland Sands Design will renew their partnerships with the team for the 2019 campaign.

“S&S Cycle is excited to continue our support for the RMR program,” said David Zemla, V.P. of Marketing for S&S Cycle. “Richie and crew have assembled a competitive team with a veteran factory rider and a couple of riders with up and coming talent. We are proud to be a part of the entire program.”

“Roland Sands Design is proud to support Richie Morris Racing for the fourth year of AFT Singles racing,” said Roland Sands, President of Roland Sands Design. “This year’s combination of riders, team and the newly-developed DTX-specific Roland Sands Racing Traction and Hammer wheels should give the team the advantage to contend among the top in the field for the top spot in the fastest growing motorcycle sport.”

“To complete the team with Cole and announce the entire RMR/Honda and RMR/Al Lamb’s Dallas Honda team at Daytona makes the off season work worth it,” said Richie Morris, Owner of Richie Morris Racing. “In our tests together, the entire team is a good fit. Everyone is doing their part and working hard. It has been my experience in the past that this can only lead to great things. Wins and championships are the focus. We welcome S&S and RSD back as partners as well. It’s a great feeling to have power house companies support you year after year.”

Fans can look forward to seeing Zabala make his first appearance on the No. 51 RMR/Al Lamb’s Dallas Honda Honda CRF450R at American Flat Track’s season opener – the DAYTONA TT presented by Russ Brown Motorcycle Attorneys. The action will take place under the lights of the Daytona International Speedway on Thursday, March 14, 2019. Tickets start at just $35 online ($45 at the gate)

Testing concludes at Jerez for the Mission Winnow team: next stop Le Mans

May 7, 2019 Michael Le Pard News Comments Off on Testing concludes at Jerez for the Mission Winnow team: next stop Le Mans

After positively concluding the Spanish GP with both its riders in the top five, the Mission Winnow Ducati team resumed action at Jerez de la Frontera for a collective, one-day test. In mild weather conditions, […]