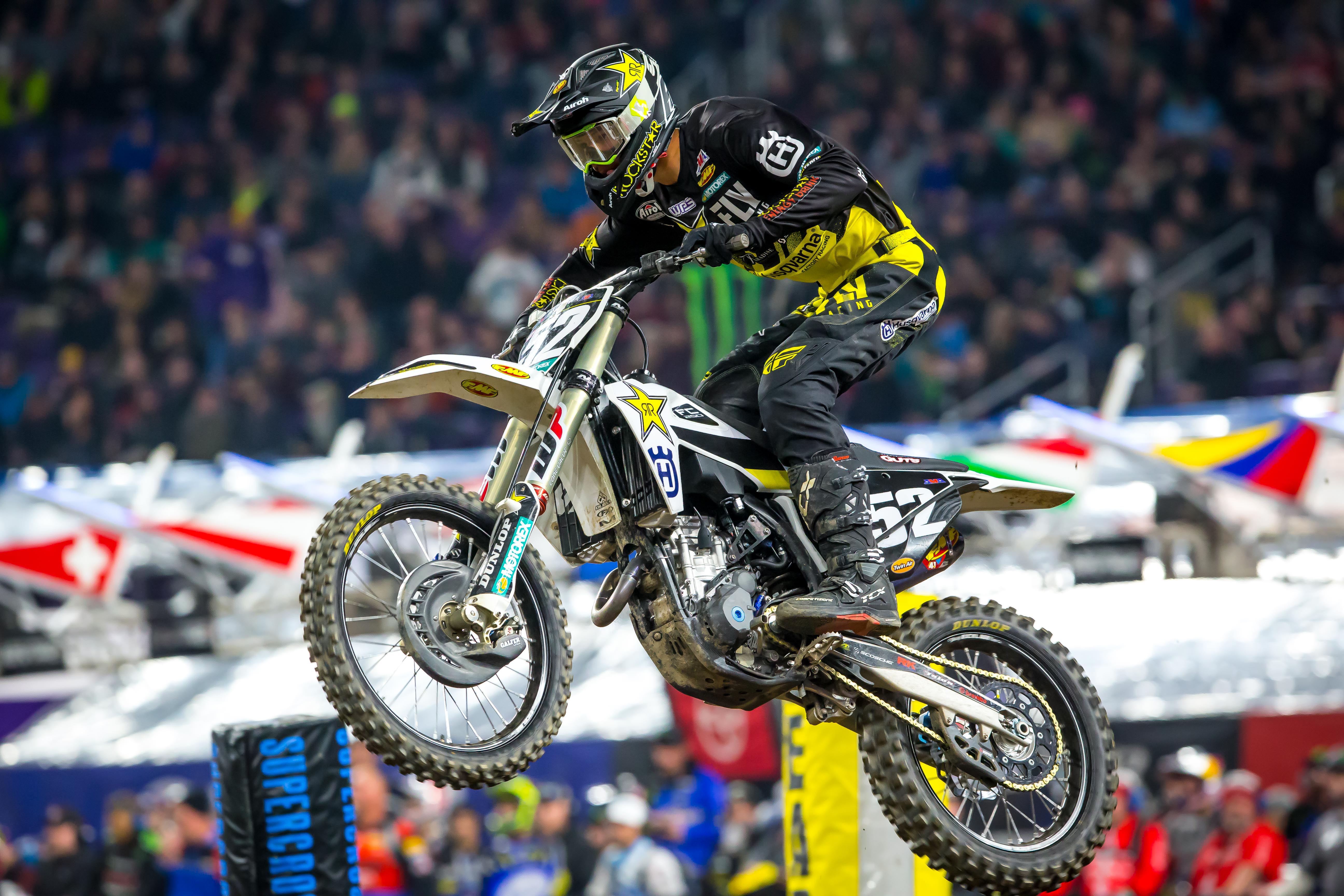 Rockstar Energy Husqvarna Factory Racing Team’s Dean Wilson scored a top-ten finish in the 450SX class on Saturday with eighth-place at Round 6 of the 2019 AMA Supercross World Championship series in Minneapolis, Minnesota. The first round of the 250SX East division also kicked off on Saturday with Rockstar Energy Husqvarna Factory Racing Team riders Jordon Bailey and Thomas Covington making their AMA Supercross debuts aboard the FC 250. Bailey finished ninth in the class while his teammate, Covington, finished 11th.

450SX
Wilson, who recently joined the Rockstar Energy Husqvarna Factory Racing Team as a fill-in rider for the injured Jason Anderson, had a great start to the night as he rode his FC 450 to a fifth-place in his heat race capturing a direct transfer into the 450SX Main Event. Wilson got off to a top-ten start in the Main Event, where he maintained a solid ninth-place running through the first five laps. He quickly climbed into seventh and battled just outside the top-five for the remainder of the race, securing eighth overall for the night.

“The night wasn’t great but not too bad, either,” Wilson said. “I’m not super pumped on it but I came out healthy. I think the past couple weeks of not getting into my normal schedule, due to the rain and resting the week after Oakland because of my knee, definitely had me feeling it and it was a tough Main Event the whole time. I think just trying to get back to my normal schedule will help a lot. It was awesome to be back with the team this weekend and we’re just going to get better from here.”

250SX East
After capturing a top-ten qualifying position, Bailey lined up in 250SX East Heat 2, where he got off to a top-five start. He quickly made his way into fourth and from there he battled his way to a fourth-place transfer in the Main Event. Bailey didn’t get off to the best start in the Main Event but he worked his way up to a top-ten battle early on. He continued to charge late in the race to ultimately finish inside the top-ten with a solid ninth-place in his first-ever professional supercross.

“It was a good start to my first supercross,” Bailey said. “Practice went well and the track was pretty good. I got fourth in the heat race, and in the main my start wasn’t very good but we got ninth. I’m happy with it to start with but we’ve got to keep getting better.”

Meanwhile, in 250SX East Heat 1 Covington fought his way from outside the top-ten to secure an eighth-place transfer into the Main Event. Covington got a great jump off the line in the Main Event as he began the opening lap in the sixth-place position. He battled inside the top-ten for a majority of the race before ultimately finishing 11th for the night.

“It was a solid first weekend for me,” Covington said. “I was definitely a little bit nervous and tight throughout the whole day but each session got a little bit better and I squeaked into the Main Event in the heat. In the Main Event, I just went out and had as much fun as I could out there and it turned out pretty good. I was happy with how the bike was working and everything, just have to get back to work this week and hopefully progress next weekend.”