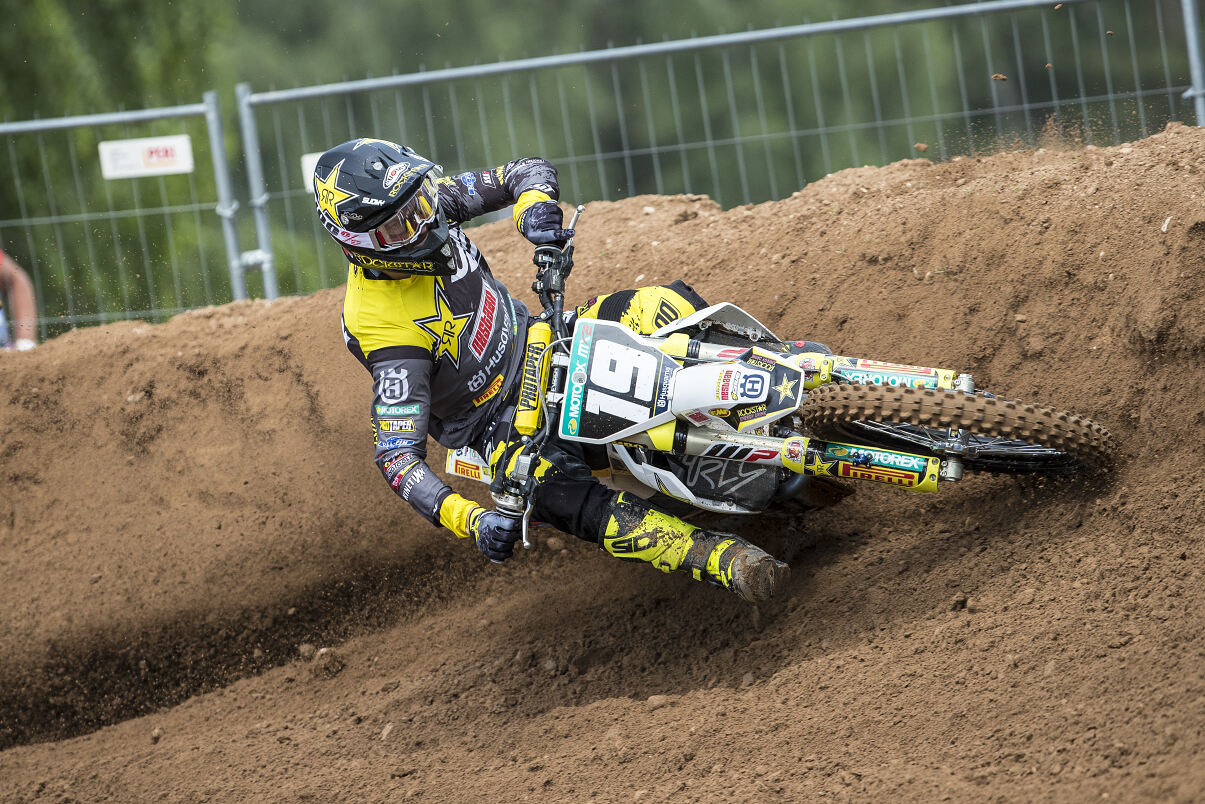 Once again earning a place on the MX2 class podium, Rockstar Energy Husqvarna Factory Racing’s Thomas Kjer Olsen has finished third overall at the GP of Latvia, round nine of the 2019 FIM Motocross World Championship. Third in each of the two MX2 motos having run second for the majority of each race, TKO secured his eighth podium result of the championship to date. In the MXGP class bad fortune hampered both Arminas Jasikonis and Pauls Jonass as each rider was unable to translate their impressive qualification performances into strong overall GP results.

With the soft and sandy Kegums track in prime condition and much to the liking of Rockstar Energy Husqvarna’s Thomas Kjer Olsen, the Dane showed impressive pace in both MX2 class races. Starting well, he held the runner-up position behind championship leader Jorge Prado for many laps in both motos.

In the first race TKO held the runner-up position until lap 13, when he was passed by Jago Geerts and moved into third. Giving his all to re-take second, Kjer Olsen finished the 17-lap race in third. The second moto was a near carbon copy of the first for the FC 250 rider. Starting well and holding second for no fewer than 16 laps TKO did all he could to ensure a second-place result. Holding off Geerts as the clock counted down towards the end of the race, with two laps to go he was passed for third. In finishing third in both races and earning third overall, TKO maintains his second-place position in the MX2 championship standings.

For Kjer Olsen’s MX2 class teammate Jed Beaton the ninth round of the FIM Motocross World Championship was made all the more difficult when the Australian went down with the flu just days before the event. Despite suffering with a fever, he gave his all to finish 10th in the opening MX2 class moto and then 13th in the second race.

Rockstar Energy Husqvarna Factory Racing’s MXGP class duo Pauls Jonass and Arminas Jasikonis both endured a tough Latvian GP having shown impressive speed around the Kegums circuit. Each delivering the goods in their qualifying race, with Jonass sixth having led for several laps and Jasikonis an impressive second, the pair were confident of having a positive GP having earned good start positions for today’s races.

Frustratingly, the opening MXGP moto yielded little in the way of positive results for either rider. Down in 22nd on lap one following a fall, Jonass had an eventful race as he fell again and dropped to 28th before charging his way back to 14th and going on to finally finish the race in 17th. For Jasikonis the race started well as from eighth he worked his way into a strong fifth position. Following a technical issue he was forced to bring his race to an early end.

The second and final MXGP race ended with both Jonass and Jasikonis showing what might have been were it not for their challenging opening races. Crossing the line in sixth and seventh respectively, both riders battled hard with Jonass improving from 11th on lap one to his eventual finishing position just outside of the top five. Despite struggling to gel with the Kegums track in the final moto, Jasikonis placed seventh with the pair finishing 12th and 14th overall respectively.

The Rockstar Energy Husqvarna Factory Racing team will next be in action at round 10 of the FIM Motocross World Championship, the MXGP of Germany, on June 23.

Thomas Kjer Olsen: “It’s been a hugely positive GP, but also a little frustrating. Another overall podium result is great, I got two really good starts and held second for so many laps in both motos. So, I feel like I should have got the overall runner-up result. I gave the second moto everything to finish second, and get second overall, but it wasn’t to be. I’m frustrated because I didn’t get far enough ahead of Jago (Geerts). He rode really strong, but I also felt like I rode well – fast and consistent, lap after lap. Lots of positives to take away from the GP.”

Jed Beaton: “It’s been a really tough GP for me, but I’m pleased I came away with points in both motos. I got sick with the flu on Thursday before the race and I really struggled with a fever and low energy. I worked hard during the qualification race and did all that I could during today’s motos.”

Pauls Jonass: “It’s been an eventful home GP for me. Highs and lows I guess you can say. I’m pleased with my speed and leading for some laps in the qualification race was great, but things didn’t go to plan in the first race today. I gave everything but I lost a lot of positions when I fell on the first lap. I crashed again while battling with Coldenhoff, and after the race I needed some stitches in my eyebrow. It was a tough one. The second race was much better, I’m pleased that the GP ended with a good result. Working my way forward with some good passes to finish just outside the top five is good. My speed is there now and I feel really good on a 450 – I’m feeling stronger and stronger on the bike with each GP, so I’m really looking forward now to putting all the pieces together during the races in the second half of the season.”

Arminas Jasikonis: “I felt really good in warm-up this morning and the first race started well, but we weren’t able to turn that good speed into the strong result we hoped for. After such a great qualifying yesterday, today has been really frustrating for everyone in the team. But that’s racing. I know my speed was good, which is really positive, and to be running right at the front of the qualification race was great. Things just didn’t work out and I struggled to find a good rhythm in the second moto.”

Championship Standings – After Round 9

Yamaha has proven to be successful, popular and builds respected motorcycles and Total Motorcycle covers everything Yamaha for our readers! Looking for the latest breaking Yamaha News? You found it! The newest Reviews? We got […]

The Pata Yamaha Official WorldSBK Team riders enjoyed a solid start to Round 10 of the 2018 MOTUL FIM Superbike World Championship at the Autodromo Internacional do Algarve in Portimão today. Michael van der Mark […]