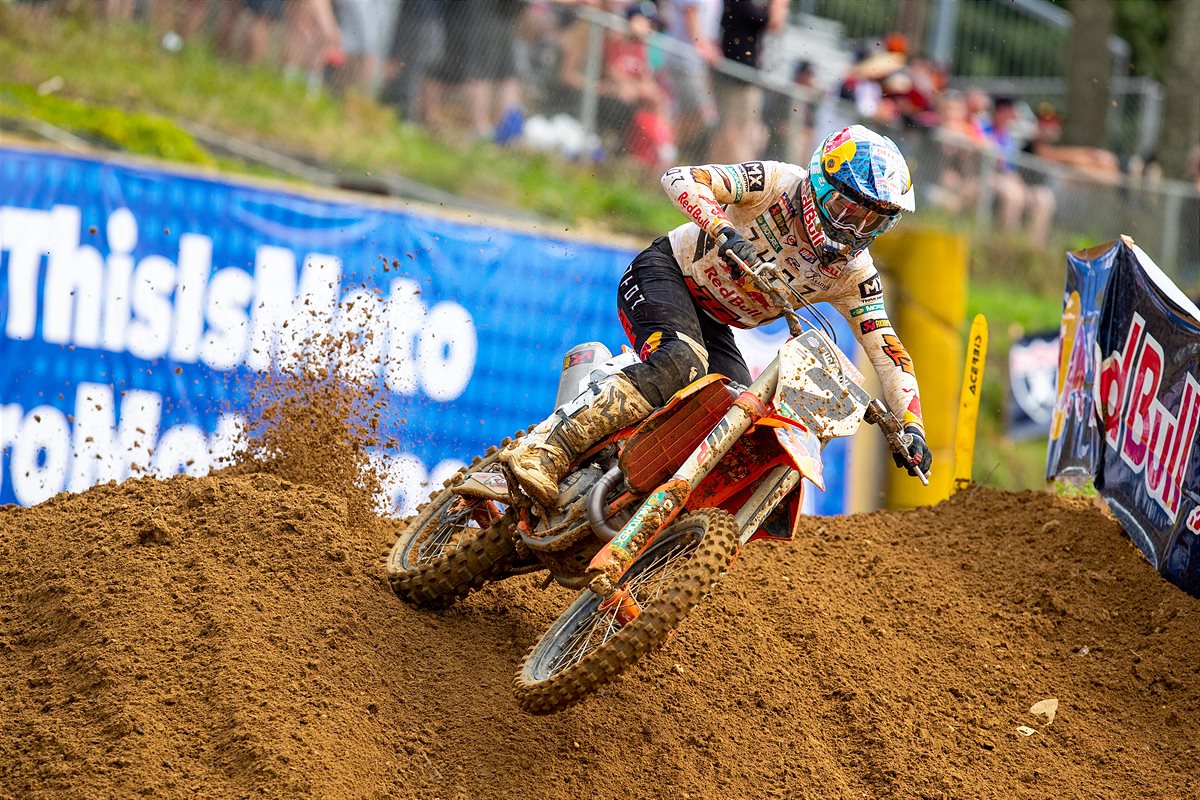 MECHANICSVILLE, Md. – Red Bull KTM Factory Racing’s Cooper Webb matched his best finish of the AMA Pro Motocross Championship season with a hard-fought fifth overall at Saturday’s ninth round of racing at Budds Creek MX in Maryland. Teammate Marvin Musquin had the speed to battle up front all day, despite working through a first-moto crash to come away with seventh overall on the day.
With a top-five qualifying position, Webb came out of the gate strong in Moto 1 as he powered his KTM 450 SX-F FACTORY EDITION to the holeshot, battling for the early lead. He maintained a top-five position throughout the race, securing fifth in the first moto. In Moto 2, Webb grabbed another solid start to position himself in second on the opening lap. He engaged in an intense battle inside the top-five for most of the race, joined by his teammate Musquin just after halfway. Musquin overtook Webb for fifth later in the race but Webb finished strong in sixth, securing a solid fifth overall on the day.
Webb: “Today was a step in the right direction. I got a great start in Moto 1, pulled the holeshot and ran up front for a little bit, ending up fifth. Second moto, I was running with those guys up front and they were really riding fast, I tried hanging in there as long as I could. I had a good battle with Marvin at the end and we were able to catch Chase Sexton there but ended up sixth in the moto and fifth overall, which is the best result so far this year. I’m looking forward to going to Ironman next, it’s my favorite race of the year!”
Musquin was able to turn his day around following a tough start to Moto 1, where he found himself on the ground on the opening lap. Coming from outside the top-20 early on, he quickly made a charge to bring himself into seventh late in the race but unfortunately, he crashed again with less than two laps to go and finished 10th. In Moto 2, Musquin had a great jump from the outside but he got pushed wide at the last minute and shuffled back to seventh on the opening lap. He made up great time mid-way through, setting himself up to make a pass on Webb for fifth later in the race. With 10-5 finishes, Musquin came away with seventh overall.
Musquin: “It was a tough first moto. I didn’t have a great start and I had crash on the first lap so I was outside the top-20 but I gave my best and actually came back to seventh and trying to pass for sixth. But unfortunately, I crashed again with a lap-and-a-half to go and ended up 10th. The riding was much better in the second moto, so I’m happy with that and there’s some positives on the second moto. We have Indiana coming up and it’s a track that I really like, so I’m looking forward to it.”
Coming off a career-best fifth overall at the last round, Max Vohland looked to keep the ball rolling at Budds Creek but things didn’t quite fall into line for the 250MX rookie. Vohland got a ninth-place start in Moto 1 and he found himself batting around the top-10 for most of the race, ultimately finishing 12th. He got off to an eighth-place start in Moto 2, battling once again inside the top-10 early on. A couple mistakes caused him to drop back to a 13th place finish in the moto and 14th overall on the day.
Vohland: “I had a pretty tough day. I didn’t really ride like myself this weekend and I really couldn’t find a flow on the track but we’ll take the positives from what we learned and really focus on the weak points in training this week and see what we can do at Ironman.”
The AMA Pro Motocross Championship will return to racing next Saturday, August 28 with the Ironman National in Crawfordsville, Indiana.
Results 450MX Class – Budds Creek National
1. Dylan Ferrandis (FRA), Yamaha, 2-1
2. Ken Roczen (GER), Honda, 1-2
3. Eli Tomac (USA), Kawasaki, 4-3
OTHER KTM
5. Cooper Webb (USA), KTM, 5-6
6. Joey Savatgy (USA), KTM, 6-7
7. Marvin Musquin (FRA), KTM, 10-5
16. Justin Bogle (USA), KTM
17. Chris Canning (USA), KTM
25. Nicolas Rolando (USA), KTM
28. Tristan Lane (USA), KTM
33. Lane Shaw (USA), KTM
38. Kenneth Venarchick (USA), KTM
39. James Harrington (USA), KTM
Results 250MX Class – Budds Creek National
1. Jeremy Martin (USA), Yamaha, 3-1
2. Jett Lawrence (AUS), Honda, 2-2
3. Justin Cooper (USA), Yamaha, 1-4
OTHER KTM
11. Josh Varize (USA), KTM
14. Max Vohland (USA), KTM
26. Kyle Greeson (USA), KTM
27. Jake Pinhancos (USA), KTM
28. Vincent Luhovey (USA), KTM
31. Jeffrey Walker (USA), KTM
32. Cole Harkins (USA), KTM
33. Christopher Prebula (USA), KTM
39. Dennis Gritzmacher (USA), KTM
40. Lawrence Fortin III (USA), KTM
41. Xylian Ramella (SWI), KTM
42. Stephen Hooker (USA), KTM
Standings 450MX Class 2021 after 9 of 12 rounds
1. Dylan Ferrandis, 345 points
2. Ken Roczen, 306
3. Eli Tomac, 283
OTHER KTM
7. Marvin Musquin, 213
9. Cooper Webb, 209
10. Joey Savatgy, 160
14. Justin Bogle, 107
17. Fredrik Noren, 58
Standings 250MX Class 2021 after 9 of 12 rounds
1. Justin Cooper, 367 points
2. Jett Lawrence, 364
3. Jeremy Martin, 307
OTHER KTM
10. Max Vohland, 168
19. Josh Varize, 76
About Michael Le Pard 7923 Articles
"Mr. Totalmotorcycle". Owner and Founder of Total Motorcycle. Supporting over Motorcyclists and Motorcycling for 23 great years. Total Motorcycle is my pride and joy and being able to reach out 375 million people has been incredible but I could not have done it without the support of my visitors, readers and members, thank you so much! You are making a difference to millions of riders worldwide. Thank you.
Website Facebook Instagram Twitter YouTube LinkedIn

There was a time, not long ago, when manufacturers offered stunning paint jobs in creative colors, wild patterns and embraced artistic passion. Black, grey, white, silver colors are the rage now, the “safe choices“. Today, […]

Most challenging circuit in WorldSBK for Yamaha

September 6, 2020 Michael Le Pard News Comments Off on Most challenging circuit in WorldSBK for Yamaha

This weekend, 31st May 2020, starting at 3 PM (Italian Time), MotoGP riders, but also some protagonists of Moto2 and Moto3, will return to compete with the MotoGP 20 videogame during the Virtual British GP, […]