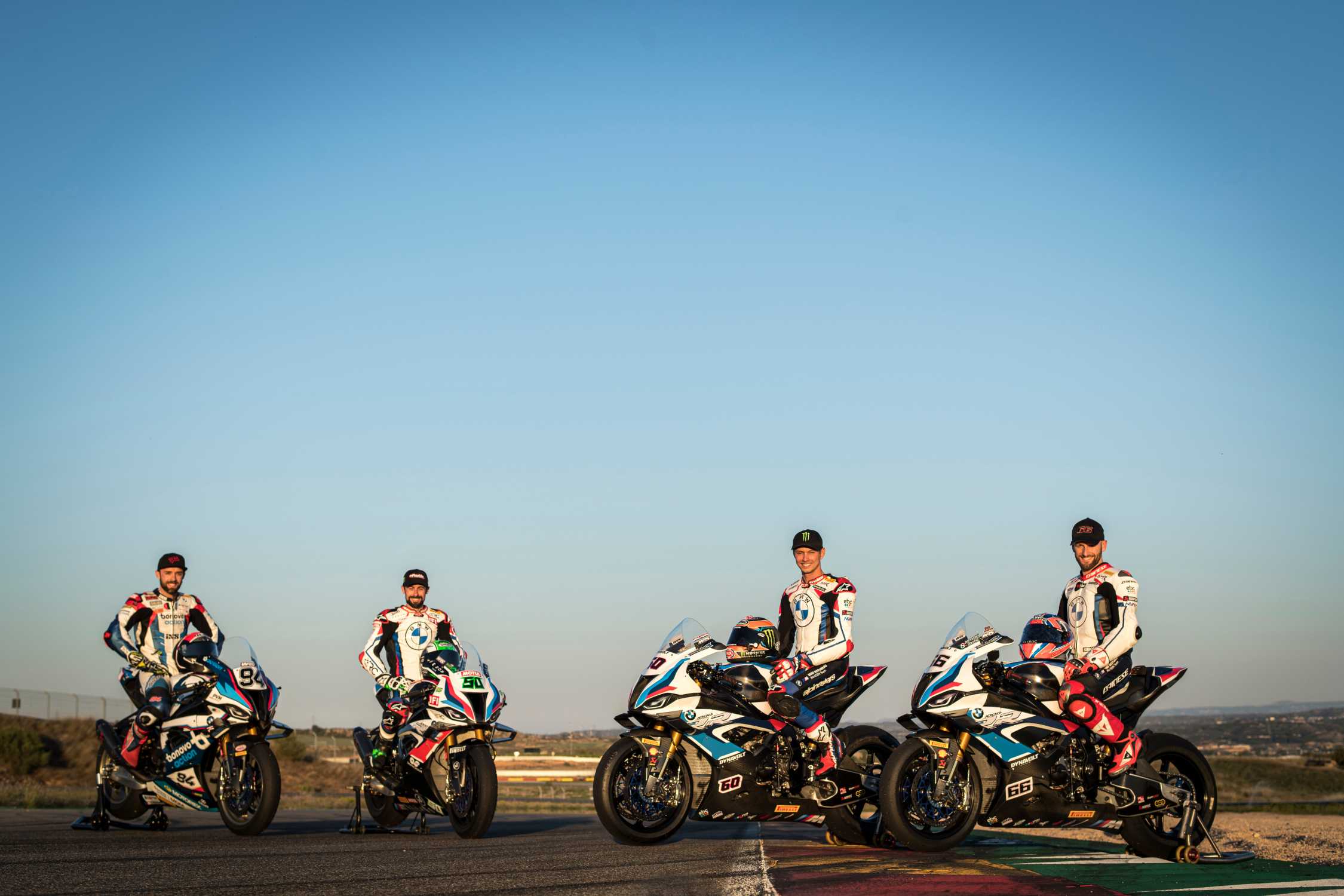 After a break of over half a year, the season gets underway with a double-header in Spain and Portugal. The first race weekend of the year will take place from 21st to 23rd May at MotorLand Aragón (ESP). This is followed just one week later (28th to 30th May) by round two of the season at Estoril (POR). In preparation for the season, BMW Motorrad Motorsport and the BMW teams were at MotorLand Aragón for a pre-season test roughly two weeks ago.

The new BMW M 1000 RR is a consistent development of the BMW S 1000 RR. At the heart of the new M RR is the engine. Like the engine for the production model, it has been developed specifically for racing. The chassis geometry and aerodynamics have also been improved. In a two-part video documentary, BMW Motorrad Motorsport shows the route from assembly to the racetrack, from the production of the engines at the BMW Motorrad plant in Berlin (GER), and the assembly of the race bikes at the headquarters of the BMW Motorrad WorldSBK Team in Guisborough (GBR), to the works and satellite teams’ outings on the track at MotorLand Aragón.

Quotes ahead of the opening round of the 2021 WorldSBK season.

Marc Bongers, BMW Motorrad Motorsport Director: “We go into the 2021 WorldSBK season with a lot of new features. For example, we are obviously looking forward to the race debut of our BMW M 1000 RR. The tests went very well and, although we still have a bit of work ahead of us with the new bike, I am feeling very positive. I would like to say another big thank you to everyone who has been so full of enthusiasm for their role in the development, assembly and preparation of the M RR: our production colleagues and engineers in Munich, engine production in Berlin, the team members and, of course, our riders. Another important step for our WorldSBK project is the fact that we are now more broadly positioned than before. As well as our established works team, the BMW Motorrad WorldSBK Team, our family now also includes the satellite teams Bonovo MGM Racing and RC Squadra Corse. When it comes to the riders, we are also very strongly positioned, with Tom Sykes, Michael van der Mark, Eugene Laverty and Jonas Folger. Our goal for the season is to close the gap to the front-runners and claim our first win.”

Shaun Muir, Team Principal BMW Motorrad WorldSBK Team: “We are looking forward to finally get into the race weekend. It has been a long off-season between Estoril and this first round. I think we have really taken good steps forward with the BMW M 1000 RR and I am looking forward to see what we can do in race conditions. The weather is looking very favourable for Aragón and obviously we go over there where we last tested so we are confident we can find a good base setting very quickly and focus on race simulations. We are confident that Michael and Tom can start on the front foot and we can start our 2021 season in a positive style.”

Tom Sykes, BMW Motorrad WorldSBK Team: “I am very excited to finally get back racing, and what better way to do it than to do it with a double header? We start in Aragón, which is obviously a circuit I really enjoy riding. The target is quite clear for me: I want to get back winning races and being consistently at the sharp and the target for me as well as for the whole BMW Motorrad WorldSBK Team. On the other side, we have got a little bit of more work we need to do in order to get to there. So we will see. For me, I just want to get a good, clean start to the season and get some strong points on the board from these two race weekends. Aragón is such an enjoyable track. Also Estoril, a track which was my first time there last year. Overall, I am very confident and can’t wait to get things started.”

Michael van der Mark, BMW Motorrad WorldSBK Team: “It has been such a long time without any racing. Testing of course is nice, riding the bike, developing the bike – but we are doing it all for racing. It has been a long winter so I am really looking forward to it and luckily we have two race weekends in a row. That is good, and also at races we can learn a lot more about the bike and try to develop it. In general, I think we are really well prepared, but for sure we have to make some more steps with the bike in development. But as I said, racing is always better as you can have a look at your opponents and see their stronger points and their weaker points. MotorLand Aragón is a nice track to start the season; especially after the test we had there. For us that’s really positive. Estoril is a lovely track as well. Last year, I had my debut on the BMW there, so I’ve ridden the BMW on both tracks and that for sure helps to make it a little bit easier. Regarding our goals for the first races: of course, we always want to fight for the podium but at the moment we are still developing the bike. I just want to get the best possible result. We will always try our best but at the moment I am still a little bit calm with expectations.”

Eugene Laverty, RC Squadra Corse: “This has been the longest off-season of my entire career and I am so excited for the season to finally begin. I have just three days of testing under my belt but I was smiling the entire time that I was riding after such a long period off the bike. I’m very happy with my new team RC Squadra Corse; all the guys made me feel very welcome and we have gelled immediately. I’m keen to realise the full potential of the new BMW M 1000 RR. The first two circuits of Aragón and Estoril were the toughest on the calendar for us in 2020 and so they will provide the biggest challenge. If we can be strong there then we can be strong anywhere.”

Jonas Folger, Bonovo MGM Racing: “I am looking forward to the season-opener, and to having two race weekends in a row. That is obviously awesome. I hope we make a good start to the season. We have done enough testing, and now it is finally time to go racing. The goal for the season is to finish in the top ten, and it would be great to really make a statement in one or two races. After that, we’ll see what happens. I am intrigued to see what we can achieve in the first few races.”

SUZUKI DOWN TO BUSINESS ON FIRST DAY OF THE MOTOGP SEASON

March 28, 2021 Michael Le Pard News Comments Off on SUZUKI DOWN TO BUSINESS ON FIRST DAY OF THE MOTOGP SEASON

Team Suzuki Press Office – July 7. The 2017 Suzuki Gixxer Cup Championship gets underway this weekend at the Kari Motor Speedway in Coimbatore, India with a new line-up of enthusiastic young riders ready to […]