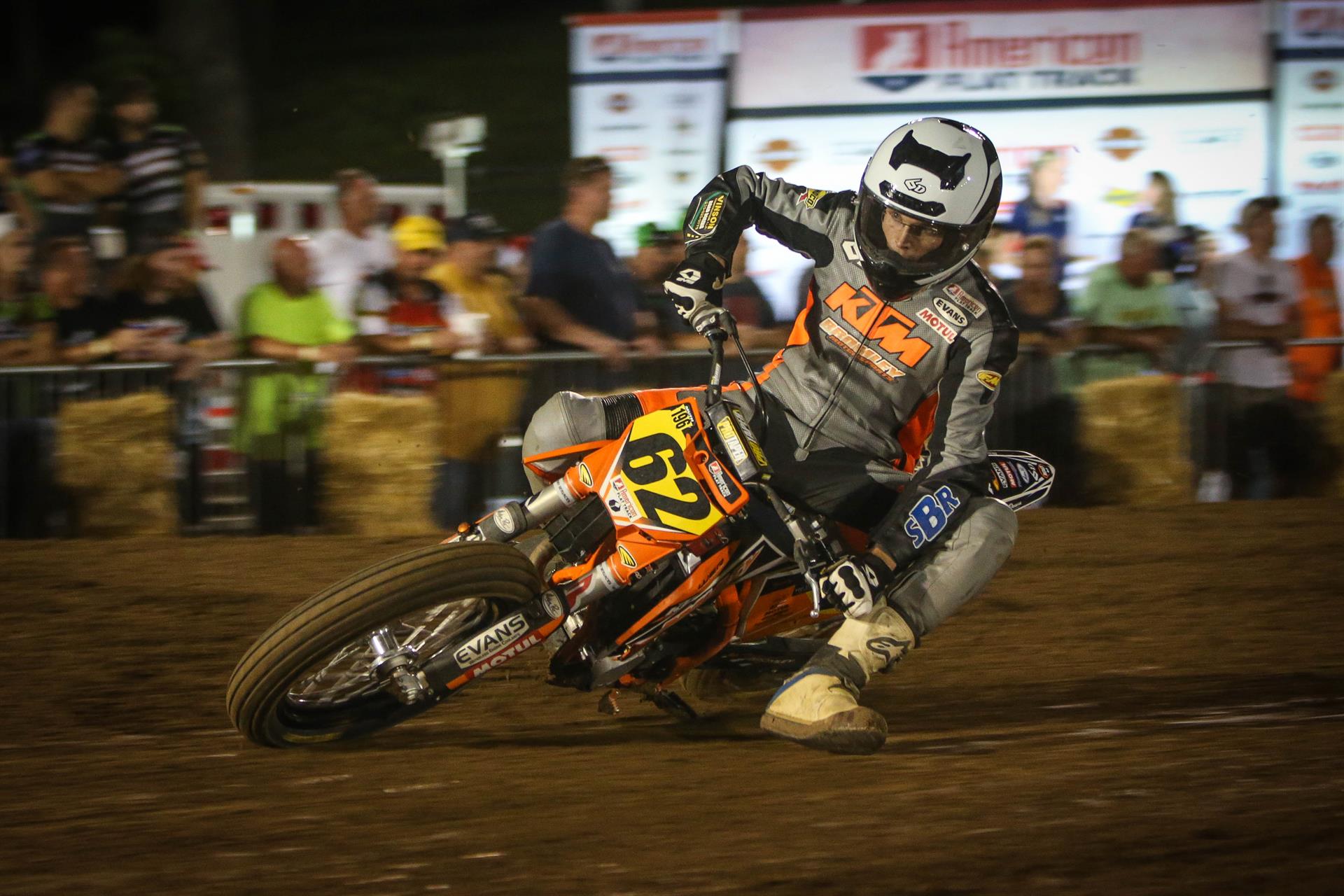 Bromley got a decent start in the Main, passed his primary series competitor Ryan Wells (No. 94 RMR/Al Lamb’s Dallas Honda CRF450) for second almost immediately, and then set his sights on Jessie Janisch (No. 132 Roof Systems/West Bend Harley-Davidson-backed Yamaha YZ450F), who’d grabbed the holeshot and looked strong early on.

Bromley hounded Janisch for much of the 15-lap AFT Singles Main event, the two pulling a slight lead on the rest of the pack. The Pennsylvania native finally made the pass for the lead with a few laps to go with a slick inside move along the back straight. It was the KTM rider’s fourth win of the season, which bumped his points lead vs. Wells from 42 to 50 with just three rounds remaining.

“This definitely helps,” Bromley said afterward. “Definitely a confidence booster for myself. I’m leading the points, and hopefully will be able to wrap up the championship in the next two or three rounds. Can’t thank everyone enough, especially my girlfriend Connor for driving out here in a pickup truck with me because our vehicle broke down on the way home from Peoria.”

Janisch held on for second against a rapidly closing Wells, which put him on the podium for the first time in his AFT career for an oval race. “I can’t tell you how stoked I am,” Janisch said afterward. The runner-up spot has him tied with Shayna Texter (No. 52 Husqvarna Motorcycles/JCS Racing FC 450) for third overall in the AFT Singles standings, with 173 points apiece.

Wells was disappointed with third, saying, “I rode like a wuss, and let them get too far ahead of me. I felt pretty good but didn’t put it together.”

Tomorrow marks the 100th running of the Springfield Mile, which will see the AFT Twins presented by Vance & Hines and Production Twins classes take on the fastest Mile in the land. Nine-time Grand National Champion Scott Parker will preside as Grand Marshal, and four AFT Singles riders who competed tonight – Ryan Wells, Jesse Janisch, Kolby Carlile and Kevin Stollings – will be riding Indian Scout FRT750s against the likes of Jared Mees, Henry Wiles and Sammy Halbert.

Gates for Sunday’s Harley-Davidson Springfield Mile II open at 9:00 am CT, with practice and qualifying starting at 10:00 am CT. An autograph signing/open-paddock fan walk is scheduled for 12:00 pm CT, with racing beginning at 1:30 pm CT.

Wainui, New Zealand. There was a concerted push south today as the 2020 BMW Motorrad International GS Trophy looked to finish the day within striking distance of the Cook Strait, ready for a leap onto […]

All SBS racing compounds are developed with SBS Partners in Racing and have enjoyed great popularity among top-level teams and riders in World Superbike, Moto 2 and 3 GP, World Endurance and TT Road Racing […]