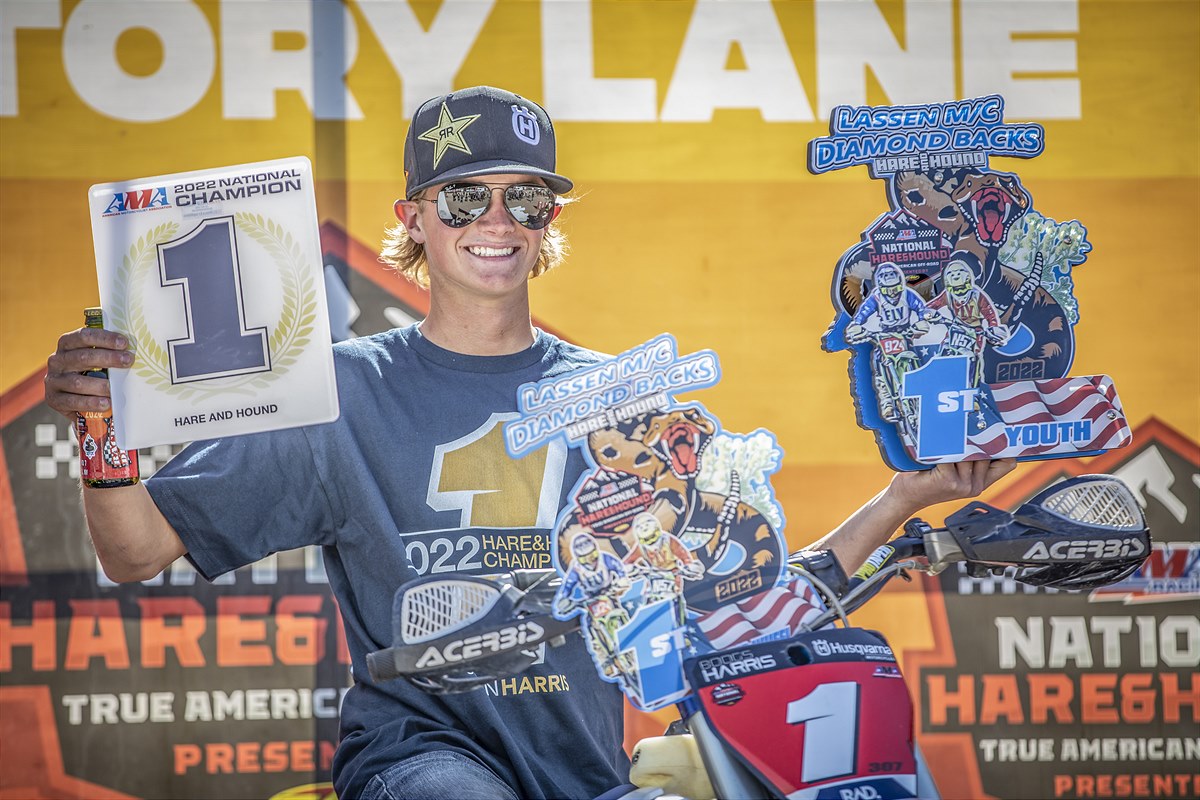 Husqvarna Motorcycles-supported rider Dalton Shirey secured the 2022 AMA National Hare & Hound Championship over the weekend with a dominant performance at the penultimate round in Lovelock, Nevada. Scoring his second-straight win at Round 7, Shirey will head into the season finale next month with his second career title locked in.
The 3 Bros Hatch Husqvarna rider was fast from the start, capturing the holeshot and battling for the early lead. Dicing back-and-forth with a pair of riders just after the start, Shirey spent the first 5-10 miles working through dust and catching back up to the leaders and coming in on loop 1, he held the lead by 46 seconds. He maintained his lead through the second loop, building his gap to 57 seconds heading into loop 3, the most challenging of them all. Navigating through a long hill climb and descent, as well as more technical terrain in the final stretch, Shirey was able to power through the checkers to claim a more than two-minute victory over second place.
“I had a pretty good start but the dust was so bad and everyone was going in every different direction, so the first 10 miles was chaos for me and I told myself I need to stay calm and collected,” Shirey said. “Once we started filing into line, I was fourth behind Jacob [Argubright] and I could see two other dust clouds ahead. I found Joe just sitting there broken down and from there on I told myself I have to keep it on two wheels, finish and do my job. Wrapping up the championship a round early was really cool. I haven’t been in that situation before, so that was really neat.”
In the Youth division, amateur support rider Jason Harris went out with a bang, successfully defending his Big Wheel title with a sixth-straight victory in the class. He grabbed a big holeshot and charged to the front early on, capturing a dominant flag-to-flag victory at Round 7.

Husqvarna Motorcycles-mounted rider, Britney Gallegos, extended her podium streak in the Pro Women’s class with third at the penultimate round of racing. The reigning class champion and current points leader looks to claim back-to-back titles at the season finale next month.

Round 8 (finale): October 22-23 – Lucerne Valley, California
Pro Class Results – Round 7
1. Dalton Shirey, HQV, 1:43:59
2. Zane Roberts, BET, +2:02
3. Jacob Argubright, KAW, +4:39
Pro Class Championship Standings
1. Dalton Shirey, 181 points
2. Joseph Wasson, 127
3. Zane Roberts, 113
About Michael Le Pard 8449 Articles
"Mr. Totalmotorcycle". Owner and Founder of Total Motorcycle. Supporting over Motorcyclists and Motorcycling for 23 great years. Total Motorcycle is my pride and joy and being able to reach out 375 million people has been incredible but I could not have done it without the support of my visitors, readers and members, thank you so much! You are making a difference to millions of riders worldwide. Thank you.
Website Facebook Instagram Twitter YouTube LinkedIn

On Monday, April 27, production will gradually start again at the Ducati factory in Borgo Panigale Employees called to work will be the minimum necessary to carry out production and research activities and must comply […]

Wrapping up their third race in just seven days, the Rockstar Energy Husqvarna Factory Racing Team closed the first chapter of the 2021 AMA Supercross World Championship on Saturday in Houston, Texas as they look […]