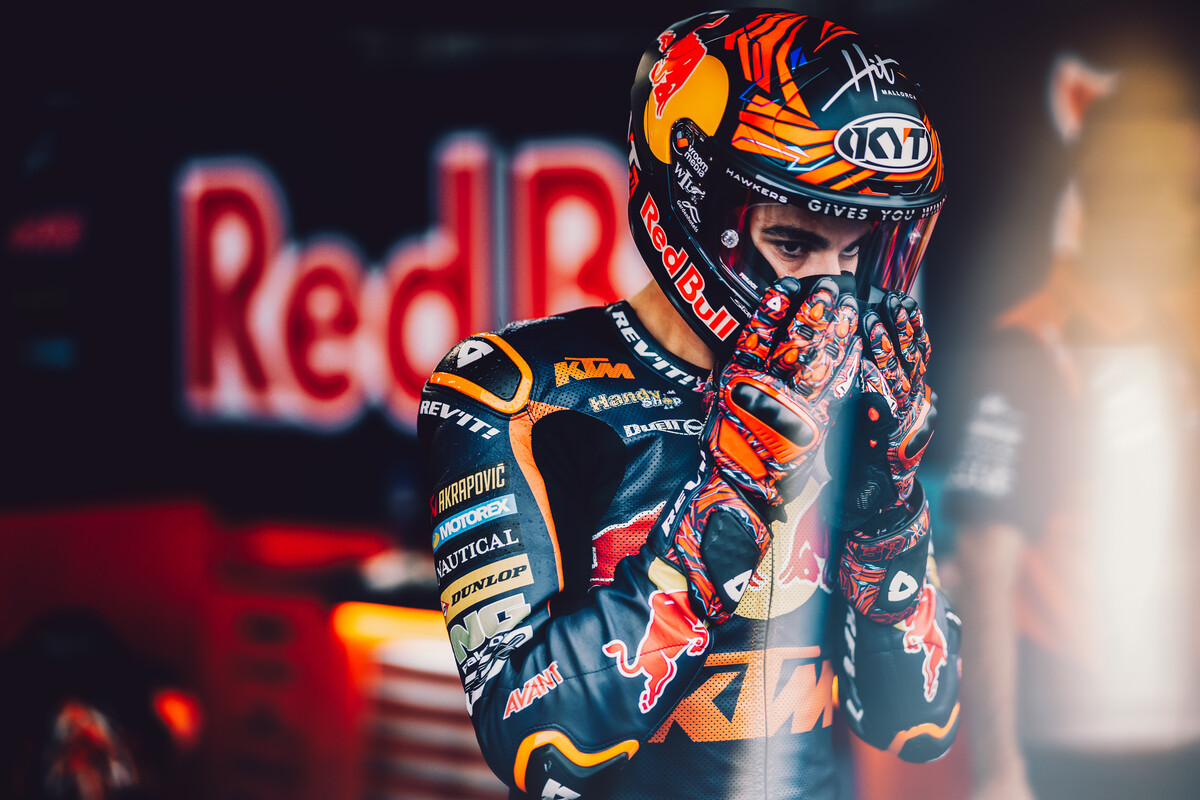 The Motul Grand Prix of Japan represented the sixteenth round of 2022 MotoGP™ and the second weekend of action for the KTM GP Academy as the season marches onwards. Red Bull KTM Ajo’s Augusto Fernandez was the standout performer at a sunny Motegi circuit where a wet weekend eventually became dry.

Moto3
Red Bull KTM Tech3’s Deniz Öncü started the Grand Prix from 8th place on the grid. The Turk slipped down the order after running wide on the first circulation and in nursing a painful hand after a crash in morning warm-up (he would classify 15th for the final point) so it was left to Red Bull KTM Ajo’s Jaume Masia to be a fixture among the leaders. The front group was formed by four riders and remained unpredictable and too tight to call for the duration of the 20 lap-distance. Masia was primed to attack for victory with four laps remaining until he highsided out of the race at Turn 12.
Daniel Holgado fell on the entry to Turn 9 early on while Adrian Fernandez also tumbled out on the same corner shortly afterwards but was able to remount and restart to finish 18th.
Moto2
Red Bull KTM Ajo’s Pedro Acosta was racing at Motegi for the very first time but was immediately up to pace and high on confidence after his second Moto2 victory in Aragon the previous Sunday. Aki Ajo’s team had the Spaniard in good form and his teammate Augusto Fernandez leading the Moto2 championship standings.
Both riders slithered to the fourth and sixth rows of the grid after a very wet qualification on Saturday but Fernandez was determined and aggressive to charge to 2nd place in the 22-lap dash on a sunny race day. Augusto tried to pressure winner and title rival Ai Ogura and the gap was just over one second at the flag. Acosta reached the line in 7th.
Fernandez has a 2-point cushion over Ogura in the championship standings with four Grands Prix and a maximum of 100 points remaining. Acosta is 6th in his rookie campaign.
Augusto Fernandez: “Wow, I gave my maximum today and came from so far behind. I had to push but I knew the tire drop would be important at the end. I managed it…but lost some time to Ai. We did what we could. The championship is still very much there, so we need to keep focused.”
The OR Thailand Grand Prix will take place next weekend for the third consecutive Sunday of racing and the hot climes of Buriram and the Chang International Circuit await round seventeen of MotoGP.
Results Moto3 Motul Grand Prix of Japan
1. Izan Guevara (ESP), GASGAS 39:26.526
2. Dennis Foggia (ITA), Honda +0.593
3. Ayumu Sasaki, (JPN), Husqvarna +1.741
4. Sergio Garcia (ESP), GASGAS +9.338
5. David Muñoz (ESP), KTM +9.414
15. Deniz Öncü, (TUR), Red Bull KTM Tech3 +30.368
18. Adrian Fernandez (ESP) Red Bull KTM Ajo +48.531
DNF. Daniel Holgado (ESP) Red Bull KTM Ajo
DNF. Jaume Masia (ESP) Red Bull KTM Ajo
Results Moto2 Motul Grand Prix of Japan
1. Ai Ogura (JPN) 40:56.269
2. Augusto Fernandez (ESP) Red Bull KTM Ajo +1.192
3. Alonso Lopez (ESP) +7.168
7. Pedro Acosta (ESP) Red Bull KTM Ajo +14.520
About Michael Le Pard 8449 Articles
"Mr. Totalmotorcycle". Owner and Founder of Total Motorcycle. Supporting over Motorcyclists and Motorcycling for 23 great years. Total Motorcycle is my pride and joy and being able to reach out 375 million people has been incredible but I could not have done it without the support of my visitors, readers and members, thank you so much! You are making a difference to millions of riders worldwide. Thank you.
Website Facebook Instagram Twitter YouTube LinkedIn

At a total of 609 kilometers, stage two was the longest of the race and included a challenging timed special of 334 kilometers. Described as the ‘most scenic’ stage by race organizers due to the […]

As we reach the end of another year, we couldn’t let it pass without reflecting on some of the highlights of 2018. It’s been another memorable year for Harley-Davidson® with lots more to look forward […]