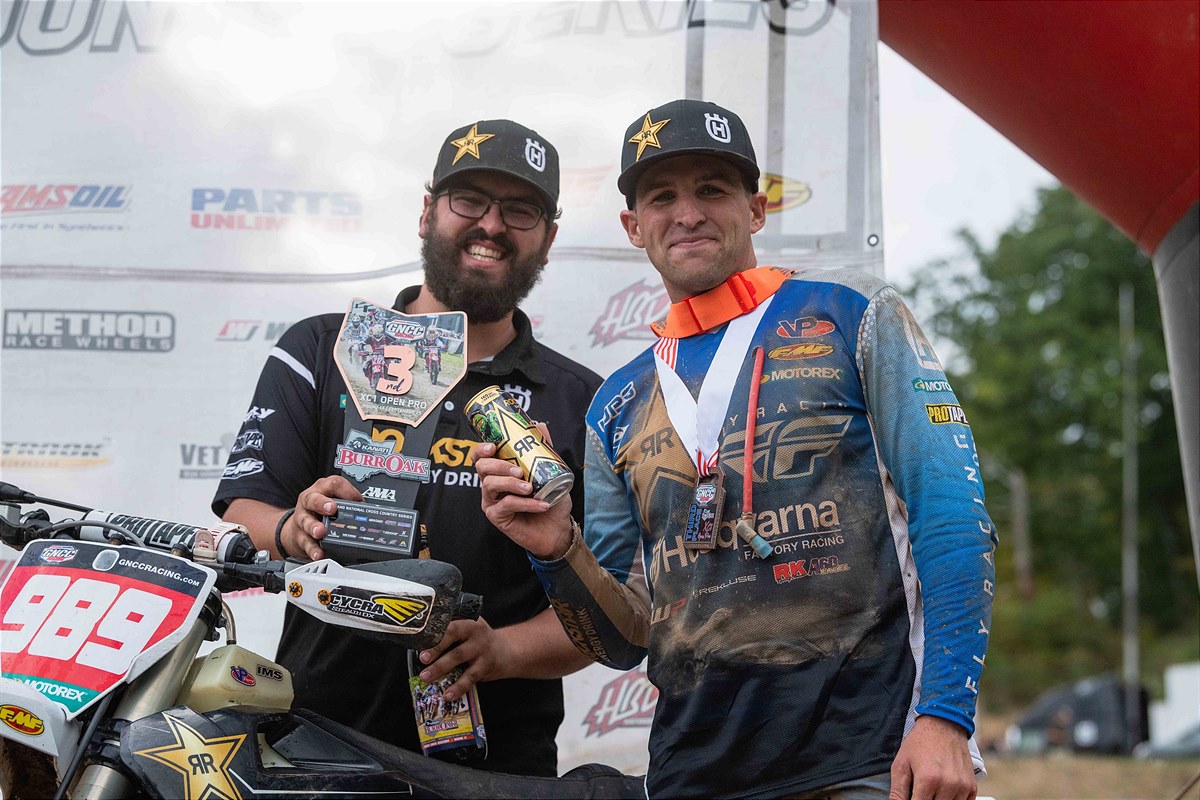 It was a banner day for Husqvarna Motorcycles riders at the 11th round of the Grand National Cross Country (GNCC) Series, with FX machines ultimately sweeping all three XC1 Open Pro podium positions in Millfield, Ohio. Claiming the overall win at the Burr Oak GNCC, Husqvarna Motorcycles-mounted rider Jordan Ashburn locked up the 2022 GNCC National Championship aboard the FX 450 but it wasn’t without a fight from the runner-up, Rockstar Energy Husqvarna Factory Racing’s Craig DeLong, who diced back-and-forth for the win late in the race. Teammate Thad DuVall had a repeat performance from the last round, claiming the last step of the podium in his second race back.
After scoring his first-career GNCC overall win and taking over the points lead at Round 9, Ashburn has been closing in on the championship late in the season. The  Tenneessee-native claimed his second overall-win today, as well as the premier XC1 Open Pro title, after leading all but one lap of the race. With eight podiums thus far, Ashburn has proven to be the most consistent rider in 2022.
“I’m pumped and happy to be up here,” Ashburn said. “I was just trying to stay out front and put in good, consistent laps because everybody was so close and I feel like we did that pretty well today. I had to push so hard there at the end to get Craig back but man, it was a race! I tried to focus on having consistent rides all year, be on the box week in and week out and just stay healthy and I think it worked out this year – I’m pumped!”
Rockstar Energy Husqvarna Factory Racing’s Craig DeLong has seen strong performances in Millfield, Ohio for the past several years, giving him a boost of confidence coming into the race. A tough start meant he had to work his way through the pack, but he was able to reach second within a couple of laps. Halfway into the race, he slipped back to third but he fought hard to keep his championship dream alive, moving into the lead on the fourth lap. He held strong late in the race but Asburn was able to eventually reel him in and make the pass on the last lap, and DeLong came through just under 12 seconds back for his second podium of the season. With two rounds remaining in the series, DeLong sits second overall in the XC1 Open Pro Championship.
“I love the Burr Oak GNCC, there’s just something about this place,” DeLong said. “It’s where I got my first win in XC2 and I’ve won here the last three years. I felt good coming into today and I knew I was the only one who could give Jordan [Asburn] a run for his money and try to keep it [the championship] going to the next race. I tried my best. He got the best of me about halfway through the last lap in the Penton section – I hit a little bit of a wall and he picked a good line and got around me. So hats off to him, he’s been riding well all year. One of my goals was to lead laps this year, and now I can check that off the list and keep moving forward.”
Although DuVall missed eight rounds of the series due to injury, the West Virginia native has stepped right back into the action since his return at Round 10. He powered his FX 350 into sixth place off the line and shuffled between fifth and sixth for the next few laps. After the halfway point, DuVall picked up his pace and moved into third, holding that position all the way to the checkers, claiming back-to-back podiums.
“I didn’t really feel comfortable today but I never gave up and kept grinding all day,” DuVall said. “I don’t think I was the fastest out of the group we were in but I definitely outlasted the guys – I feel like I could have gone another lap. I’m stoked to be on the podium and representing my sponsors up there but at the end of the day, I want to win bad!”
Husqvarna Motorcycles-supported rider, Tayla Jones, claimed her eighth WXC class podium of the season with a runner-up finish at Round 11.
Next Round: Newburg, West Virginia – October 9, 2022
Burr Oak GNCC Results
XC1 Open Pro Class
1. Jordan Ashburn (HQV)
2. Craig DeLong – Rockstar Energy Husqvarna Factory Racing Team
3. Thad DuVall – Rockstar Energy Husqvarna Factory Racing Team
Overall Championship Standings
1. Jordan Ashburn, 242 points
2. Craig DeLong – Rockstar Energy Husqvarna Factory Racing Team, 181 points
3. Ben Kelley, 180 points
4. Trevor Bollinger – Rockstar Energy Husqvarna Factory Racing Team, 148 points
…
20. Thad DuVall – Rockstar Energy Husqvarna Factory Racing Team, 42 points
About Michael Le Pard 8443 Articles
"Mr. Totalmotorcycle". Owner and Founder of Total Motorcycle. Supporting over Motorcyclists and Motorcycling for 23 great years. Total Motorcycle is my pride and joy and being able to reach out 375 million people has been incredible but I could not have done it without the support of my visitors, readers and members, thank you so much! You are making a difference to millions of riders worldwide. Thank you.
Website Facebook Instagram Twitter YouTube LinkedIn

Even torrential rain could not dampen spirits at RedBud, the circuit that played host to the 2022 Motocross of Nations. Thousands of fans flocked to the historic venue to witness the seventy-fifth edition of the […]