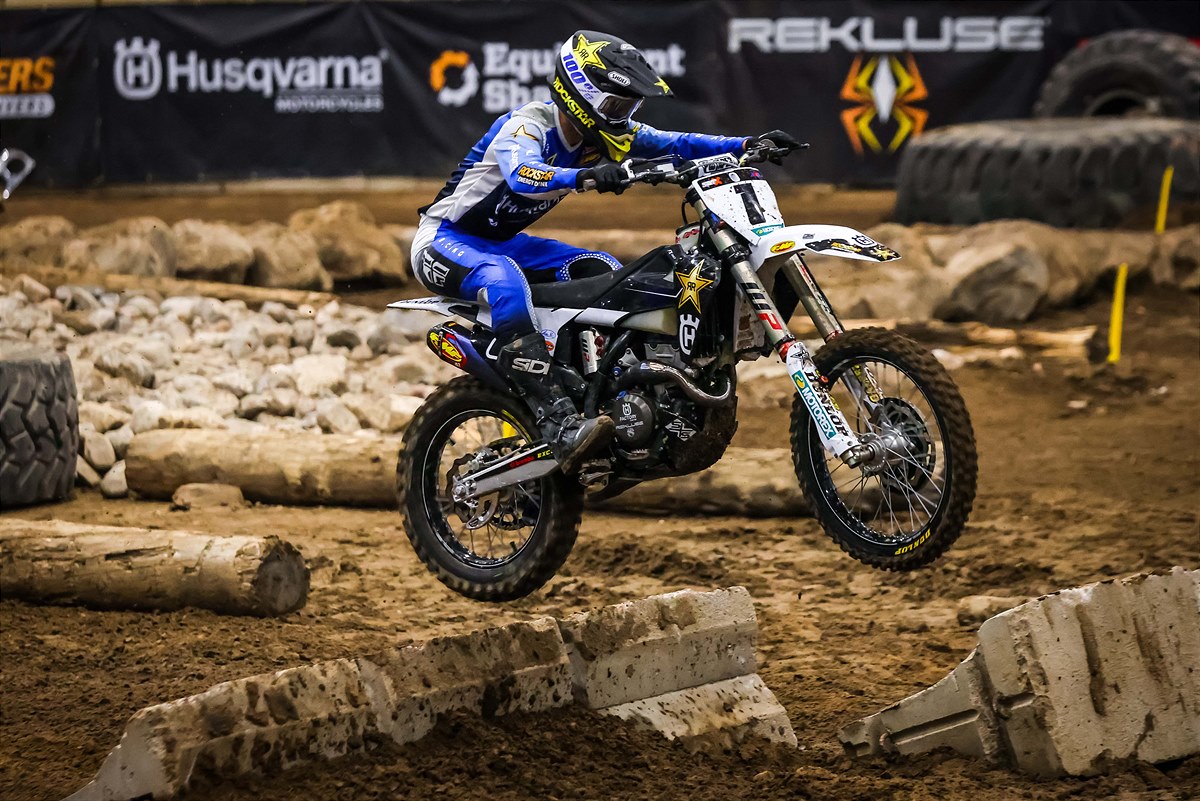 Rockstar Energy Husqvarna Factory Racing’s Colton Haaker had a strong start to the night at Round 3 of the 2022 AMA Endurocross Series, securing the Moto 1 win – his first of the year – in Denver, Colorado. The reigning champion faced some challenges in the second moto but he bounced back with a seventh-place finish in the final race, claiming seventh overall on the night.
Haaker tackled the complex course with a vengeance, taking second in Hot Laps – just .123 seconds behind the leader. He carried that momentum into Moto 1, where he immediately put himself into the lead and held strong all the way through the checkers. He started just outside the top-five in Moto 2 but a mistake in the matrix section caused him to shuffle back to 12th. With bent bars, Haaker did what he could to salvage the rest of the moto, ultimately finishing 12th. In the last moto, Haaker grabbed a top-10 start and within a couple laps, he was sitting in seventh. Hungry for more, he continued to attack the track but was unable to pick up any more positions before the checkered flag waved. His 1-12-7 results allowed him to collect seventh overall for the night.
“It was another up and down night for me, Haaker said. “We started out with a win in the first moto, which was good. There’s a really nasty matrix section here that was just claiming people, and at the start of the second moto it claimed me pretty good. It bent my bars up to the point of no return. I stopped and tried to straighten them out, kicked the front tire over and just tried to salvage what I could, but I ended up having another big crash later in the race. I had a back row start in the third moto and I tried to just come through and ride consistently. We live to fight another day, working on getting better day by day, week by week.”
Round 4 of the 2022 AMA EnduroCross Championship will take place on Saturday, October 22 in Prescott Valley, Arizona.
EX Pro Results – Round 3
1. Trystan Hart (KTM) 2-3-1
2. Taddy Blazusiak (GAS) 4-1-2
3. Cody Webb (SHR) 3-2-5
…
7. Colton Haaker – Rockstar Energy Husqvarna Factory Racing, 1-12-7
15. Ryder LeBlond (HQV) 15-13-15
Overall Championship Standings
1. Taddy Blazusiak, 71 points
2. Trystan Hart, 67 points
3. Jonny Walker, 61 points
…
6. Colton Haaker – Rockstar Energy Husqvarna Factory Racing, 47 points
7. Ryder LeBlond, 39 points
About Michael Le Pard 8443 Articles
"Mr. Totalmotorcycle". Owner and Founder of Total Motorcycle. Supporting over Motorcyclists and Motorcycling for 23 great years. Total Motorcycle is my pride and joy and being able to reach out 375 million people has been incredible but I could not have done it without the support of my visitors, readers and members, thank you so much! You are making a difference to millions of riders worldwide. Thank you.
Website Facebook Instagram Twitter YouTube LinkedIn

The MJC Yamaha Official EMX125 team made an impressive return to action in Teutschenthal, Germany, at the third round of the EMX125 Championship. It was a day of firsts for the 16-year-old Dutch sensation Ivano […]

LOPEZ RACES TO MOTO3 POINTS AT FIRST GRAND PRIX OF 2020