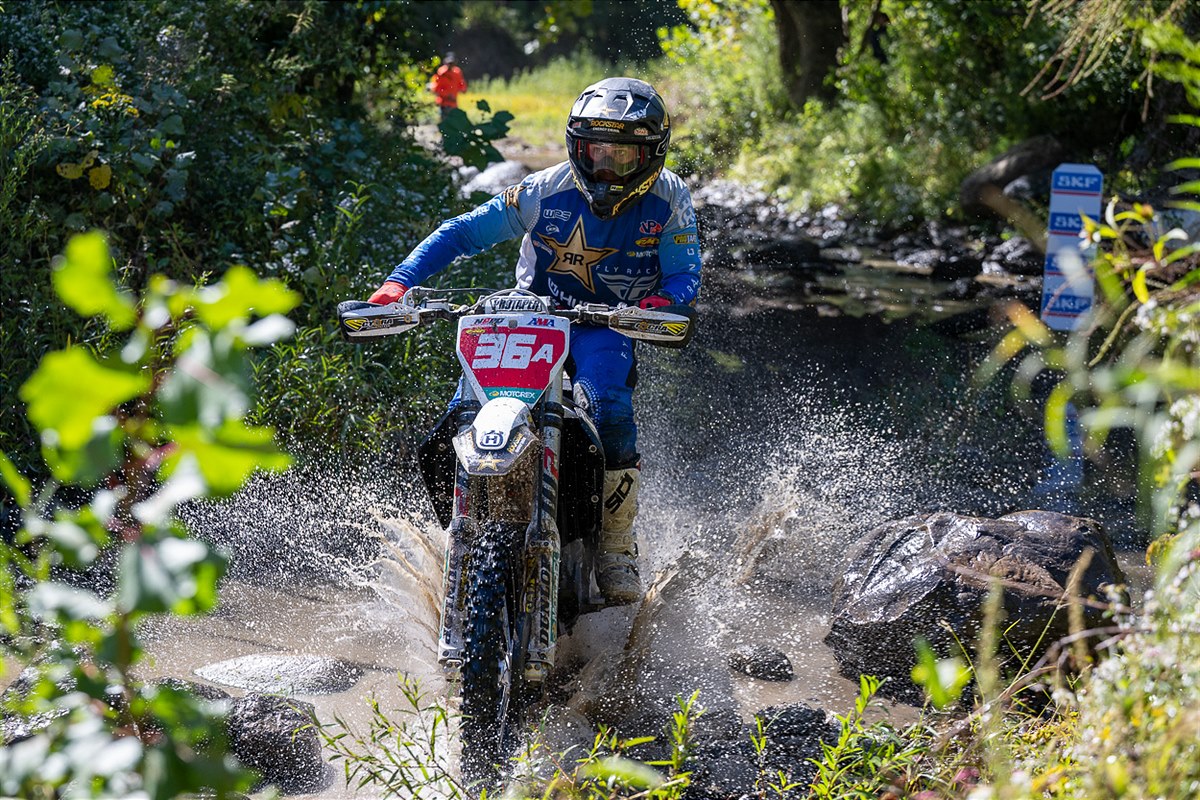 Rockstar Energy Husqvarna Factory Racing’s Craig DeLong continues to produce solid top-five performances in the AMA National Enduro Series, grabbing an impressive fifth overall this weekend at the Muddobbers National Enduro in Matthews, Indiana. Meanwhile, despite still recovering from a recent hip injury, DeLong’s teammate Thad DuVall continues to regain his footing in the enduro series and claimed a solid sixth overall finish at this weekend’s event.
DeLong got off to a slow start in the opening test after making a poor choice of tires to start the race. The Pennsylvania native quicky changed to a different set up for test two, and the move resulted in DeLong posting the third-fastest time of the test on his Husqvarna FX 350. DeLong continued to produce consistent test results for the remainder of the day, which culminated in a solid fifth overall finish at the end of the race.
“I didn’t really realize how dry it was, so I kind of stuck with my normal setup for tires, which was a little bit off for how dry the course was, resulting in my slow start,” DeLong said. “I was a little off the pace in the first test. Then I made a change for the second test, which turned out to be a better choice and I was just kind of in that third, fourth, fifth place area. Overall, I just struggled a little bit with lappers with where I could catch them on the course and I had a couple little tip-overs and that kind of cost me a little bit. Other than that, it was just a good day. I was able to make up some points and we’re still healthy, so that’s always good.”
DuVall was the picture of consistency, posting the sixth-fastest time in test two and then laying down the seventh-fastest time in the remaining five tests to finish sixth overall, beating out seventh place by a single second after 55 miles of racing.
“I’m just getting back into racing for the national enduros – I skipped Michigan just because I wasn’t sure how the hip would be after the first GNCC,” DuVall said. “I think I was just riding too comfortable, still kind of nursing the hip a little bit. It’s still not 100% but it was still a good day. I rode really good, I just didn’t really get out of my comfort zone like I should have to really be challenging those guys. It was a fun day riding the 350.”
Round 9: October 16 – Sand Springs, Oklahoma
NE Pro1 Results
1. Grant Baylor, GAS, 01:21:04.580
2. Josh Toth, KTM, +35.117
3. Ricky Russell, GAS, +08.206
…
5. Craig DeLong, HQV, +9.461
6. Thad DuVall, HQV, +1:57.267
NE Pro1 Championship Standings (After 8 of 10 rounds)
1. Grant Baylor, 201 points
2. Steward Baylor, Jr., 167
3. Ryder Lafferty, 161
…
5. Craig DeLong, 142
14. Thad DuVall, 42
About Michael Le Pard 8443 Articles
"Mr. Totalmotorcycle". Owner and Founder of Total Motorcycle. Supporting over Motorcyclists and Motorcycling for 23 great years. Total Motorcycle is my pride and joy and being able to reach out 375 million people has been incredible but I could not have done it without the support of my visitors, readers and members, thank you so much! You are making a difference to millions of riders worldwide. Thank you.
Website Facebook Instagram Twitter YouTube LinkedIn

The Lucas Oil Pro Motocross Championship’s anticipated return to the Pacific Northwest’s scenic Washougal MX Park provided one of the most competitive afternoons of racing during the 2021 season. Greeted by abundant sunshine and a raucous […]

CONFIRMATION AND CONSISTENCY THE KEY ON QATAR TEST DAY 2